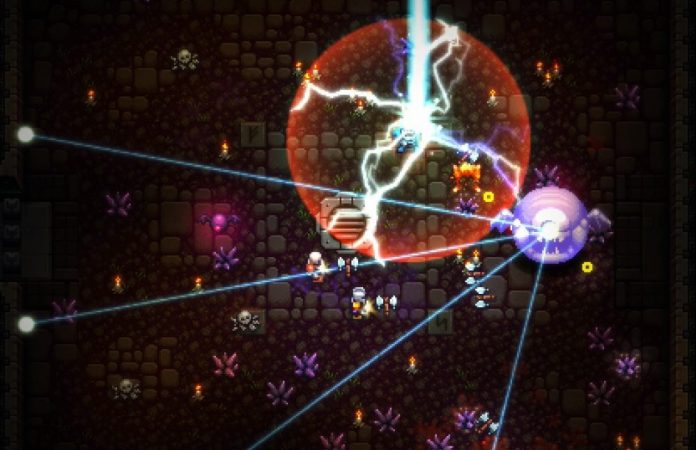 It feels like there’s been a deluge of twin stick shooters recently. Good ones too, like Serious Sam’s Bogus Detour and Nex Machina.

Confused Pelican’s Iron Crypticle is the latest to join the fray, available now for PlayStation 4, Xbox One and PC. Themed around knights crusading through dungeons to recover a kidnapped princess and a haul of loot, you’ll be slinging axes, hammers and a myriad other medieval weapons rather than bullets.

Iron Crypticle is retro through and through. From the moment you boot it up it’s like being taken back to the 80s. The visuals are pixelated, storytelling is virtually non-existent, and the music is catchy but can quickly grate. Like so many games in the 80s though, the gameplay is rewarding – if not a little unforgiving – making Iron Crypticle the type of title you’ll possibly go back to again and again… providing you can stand the repetition.

“Iron Crypticle is a game all about shooting and looting, which is all good, until you die and lose everything.”

Three difficulty levels are available right from the outset, but even on easy Iron Crypticle is challenging. Starting in an empty room on floor one of Cryptonia’s castle depths, you move room by room, clearing out foes before deciding on your next destination. Monsters spawn all around you – some much more dangerous than others – and only by keeping your wits about you will you survive the onslaught.  You need to be wary of how long you take to clear out each room too; take too long and new enemies impervious to your attacks will appear, ever vying to take your life.

There are chests to be plundered and objects to be destroyed, which, just like enemies when bested in combat, release a cacophony of collectibles for you to pick up. Coins can be saved and used at arcade machines to play a nifty side-scrolling minigame, power-ups help you get the task done with more haste, while foodstuffs boost your score, especially when collected in quick succession. Iron Crypticle is a game all about shooting and looting, which is all good, until you die and lose everything. The first few times you take it on the chin and chalk it up to experience, but eventually the lack of persistence does wear thin. 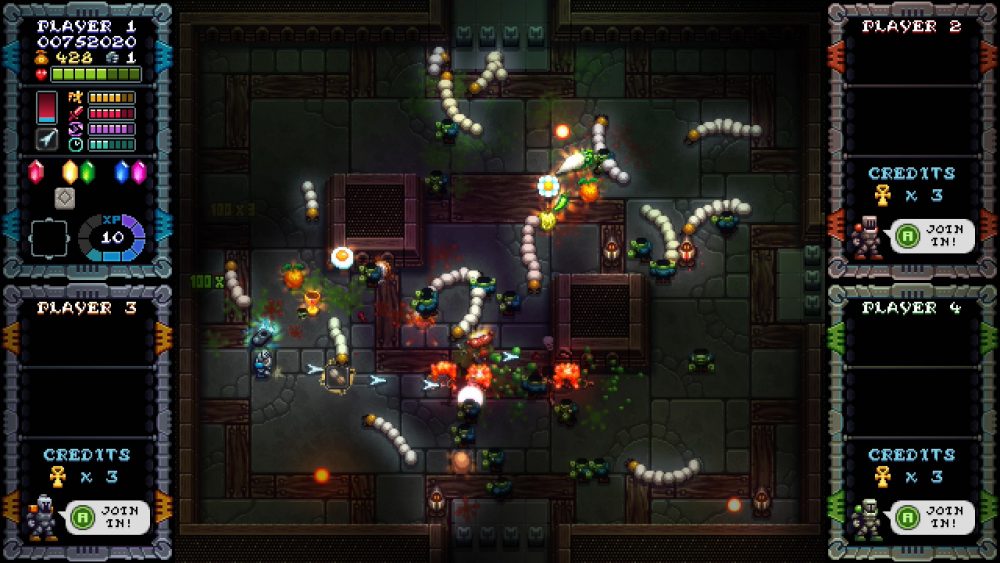 A boss will be the most likely cause of your death. You’ll reach one on each floor of the dungeon after clearing 9 or 10 rooms, and they can be truly challenging. Your movement speed is fairly slow and your basic weapon has limited range, making avoiding their attacks, any enemies that are lurking about and the many obstacles that are often placed in your way often a tall task, unless you exploit weapon pickups and your handy dash manoeuvre effectively. Get cut down in action and it’s back to the beginning you go, starting from square one yet again.

Things are undoubtedly easier if you take some friends along for the ride. Iron Crypticle has support for up to four player local co-op – no online I’m afraid – and playing with companions makes it a much more pleasurable experience. For starters, you actually get access to continues. When playing solo, the moment you die, that’s it, you’re done for, but in co-op, as long as someone is still alive and you have some credits available, a deceased player can rejoin the action. Not really very fair, is it? Add to that that with four players blazing through the rooms everything just gets done easier and faster, you have an a game that shines in multiplayer compared to its frustrating single player offering.

“In many ways, Iron Crypticle is old fashioned to a fault – the lack of persistence and awkward 8-directional movement and shooting mires it in the past, bereft of any modern gameplay enhancements.”

In the long-term there’s a ledger to complete – an encyclopaedia of all the collectibles and enemies you encounter on your adventures – and there are also leaderboards, allowing players that love to chase high scores to pursue their passion. For many players though, I can’t imagine these features being enough to hold their interest. Iron Crypticle will likely be the game that they put on once in a while, remember the fun times they had with similar retro titles in the past, die, and then sleep on the title for a period of time again. In many ways, Iron Crypticle is old fashioned to a fault – the lack of persistence and awkward 8-directional movement and shooting mires it in the past, bereft of any modern gameplay enhancements.

Of course, some players may admire Iron Crypticle for the nostalgic trip it so knowingly provides. It wears its heart on its sleeve, and those with a thirst for a challenge and the patience to deal with repetition will get on with it like a house on fire. Those that have moved with the times though will quickly find it tiring, slow, and ultimately a bit dull compared to some of the flashier, quicker and more feature-rich twin-stick shooters of recent times. If you have a penchant for retro and some like-minded buddies that are at your beck and call, you can do a lot worse than Iron Crypticle, but it’s hard to recommend for those flying solo, who’ll probably get much more fun out of other titles on the market.

Iron Crypticle is available now on PlayStation 4, Xbox One and PC. We reviewed the Xbox One version.