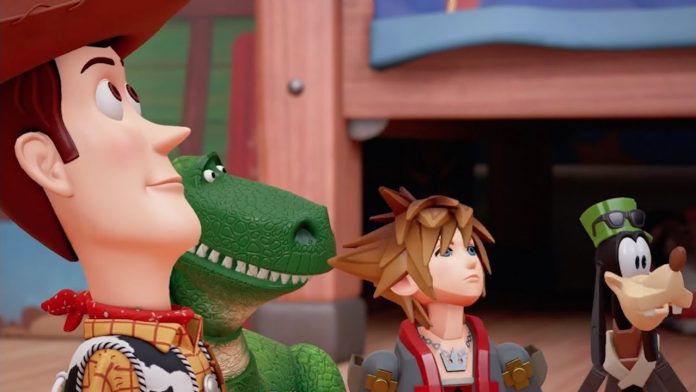 During last week’s D23 – an expo for all things Disney – a brand new trailer was shown off for Kingdom Hearts 3, and it’s told us a lot about the game.

First, we now know it’s releasing in 2018, although we still don’t have a date more specific than that. I’d wager it’s still a way off, with the latter half of 2018 being more likely.

Second, it’s releasing on PlayStation 4 and Xbox One. This is great news for Xbox One owners, as the previous Kingdom Hearts games have only ever released on PlayStation format. Furthermore, a Switch version hasn’t been completely ruled out. In an interview with IGN, Kingdom Hearts 3 director Tetsuya Nomura has said he’s very interested in the Switch, and a port to Nintendo’s newest console may well happen after the Xbox One and PS4 versions have been released.

“For now, we want to focus on what platformers we’ve already announcement we’re going to be releasing Kingdom Hearts 3 on,” Nomura stated. “And so after, perhaps, maybe we can start thinking about other possibilities.”

Back to that brand new trailer though. Showing five and a half glorious minutes of gameplay footage, the D23 Kingdom Hearts trailer reveals one very exciting piece of news: one of the worlds is Toy Story!

Being a CGI Pixar title anyway, Toy Story fits the bill perfectly, and the recreation of Andy’s Room and all the toys we know and love are almost perfect. Sora, Donald and Goofy become ‘toy-ified’ for their adventures with Woody and Buzz, complete with a plastic veneer and stiff square joints. Their fight against the heartless takes them to a toy store, where a large-scale battle against the Heartless takes place.

It’s here that, as Sora, you can take control of a giant mech, firing laser beams at enemies from the safety of its cockpit. While much of the combat on display in the trailer looks much like the combat of Kingdom Hearts 1 and 2, Sora looks to have a new set of skills at his disposal, and of course, being able to take control of giant robots to battle with makes things much more interesting.

Check out the trailer for yourself below: