Imitating the neon-soaked arcade cabinets of the 1980s is a great way to hit gamers right in their nostalgia centres; an approach that Kung Fury: Street Rage uses to great effect.

The sights and sounds of the CRT screens and chip-tune soundtracks will soften even the most hardcore console gamer.

Kung Fury is actually a tie-in to the fairly unknown but critically well-received short film of the same name. Released in 2015, it was an intentionally clichéd, tongue-in-cheek attempt to emulate the buddy cop and Kung-fu movies of the ‘80s.

Focusing on the video-game, eponymous character and Keanu Reeves-soundalike Kung Fury has one of his gang of unusual suspects, “Hackerman”, hack him into the past. As you might expect, this goes wrong and the peculiar pals end up inside of an arcade machine where they must fight digital versions of Hitler and some generic Nazis as they attempt to escape back to their reality. Other buddies include Barbarianna and Triceracop, each with their own methods of dispatching your enemies. Barbarianna’s axe/mini-gun combination is especially satisfying.

So how does Kung Fury play? Strangely, I find it easiest to compare it to a rhythm-action title like Guitar Hero or Rockband, but without the rhythm. Attacks are a simple case of either pressing left or right depending which direction you want to hit in. And that’s it, there’s no movement (outside of boss battles).

Each successful hit builds your combo, although this is purely for points with no special moves, abilities or perks to be earned from having a bigger combo. Herein lies one of Kung Fury’s biggest drawbacks and, ultimately, frustrations. As the rounds progress and things become more and more hectic with several different enemy types coming from both directions, it becomes increasingly difficult to keep all of the marauding, 1980s, arcade-Nazis (not a sentence I ever expected to type) at bay, especially when identical enemies can disappear behind one another, meaning you may think you’ve taken out all of the current wave but you’ve missed just one. Simply put, a screen-clearing super-move à la Streets of Rage would resolve these issues and buy you just a few vital seconds to prepare for the rest of the wave. 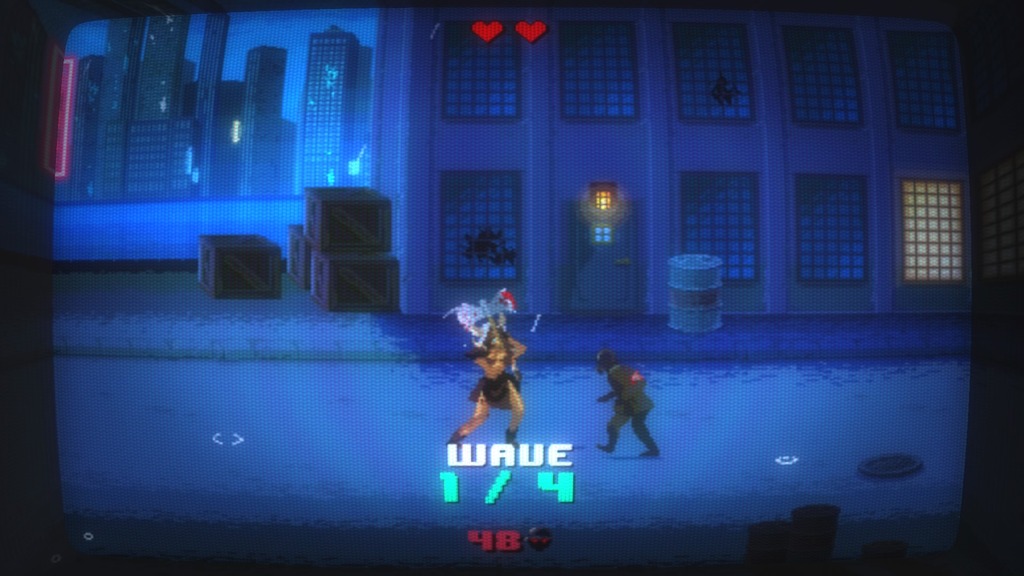 These frustrations are compounded by Kung Fury’s unusual decision to restrict you to a minimal number of lives, meaning that in some cases, sustaining just two hits during up to five waves of 40 enemies will see you starting the round over, and over, and over again. Each round is based in the same street area which means the game feels repetitive pretty quickly, and while there is some variety to the enemy types, it remains less than a handful.

Kung Fury‘s end-of-level boss fights are a semi-welcome appearance. They fit perfectly into the game and its ethos and truthfully, you couldn’t make an arcade cabinet-style game without them. The trouble is, they seemed to require extra controls that were not made clear. It may simply be double-tapping to block, but if you aren’t made aware of that, it’s a frustrating few attempts before you figure it out (probably by accident). The other issue is their health takes so long to diminish, especially in the latter stages, but breathe a sigh of relief as the only checkpoints in the game are set at the start of boss fights, so although many others would be welcome, this at least means that your dozens of deaths during the boss battles won’t force you to restart the whole stage.

I also experienced a couple of system crashes when using Kung Fury’s menus, but as annoying as that always is, fortunately they didn’t lose any progress and the loading times are minimal, which again saved any real frustration. This isn’t to be confused with the blue-screen “crash report” that serves as the pause screen; just one of the dozens of references for arcade fans to enjoy. My personal highlight of the whole game was the simple but pitch-perfect sound of a coin being deposited into a machine when you press continue. This would be closely followed by the image distortion as though you were playing on a rounded cabinet screen – but this is only really discernible on a bigger TV when playing the PS4 version.

Kung Fury: Street Rage is not a perfect experience, but for £3.29 it could be worth it for those willing to attempt to gain the top spot on the leaderboards. If you love classics like Streets of Rage or Double Dragon and long for the arcade cabinet experience of the past, Kung Fury could be what you’re looking for, but its short length, frustrating mechanics and lack of variety really hold it back. What there is, I suspect, has turned out just as developers HelloThere AB intended, but whether that’s for the best or not is, I think, a very personal choice.