And now we come to what I believe is the final secret of the Dark Souls series. It came to me when I journeyed to The Painter to hand over the blood and ‘end’ the game once and for all.

In order to get to The Painter, you journey through Ariandel Chapel, in which there are a stack of paintings all depicting the same red-robed woman. I looked at these paintings, idly as I went by. I ascended the ladder to the attic where the Painter waited, musing over her canvas, kicking her scaled feet back and forth like a child. Upon handing over the blood to The Painter, she asks our name. If you tell her your name she says: “My thanks. I will paint a world of that name. Twill be a cold, dark, and very gentle place. And one day, it will make someone a goodly home.” If you choose not to tell her your name, then she will name the painting “Ash”.

As she told me that she would paint a world in my name, it struck me. A truth dawned, so blindingly obvious it had eluded me up to this point. I can’t believe, in all honesty, it didn’t occur to me in the very first Dark Souls game, but then, I suppose I didn’t have the additional evidence Dark Souls III brought to the table.

You see, I think that the entirety of Dark Souls, every game including Demon’s Souls and Bloodborne, takes place inside a painting.

Let me re-frame that: I don’t believe there is an over-world or a ‘real’ world, or if there was, it’s surely been forgotten. There are only paintings, endlessly framed inside one another, going down to some point of muddied annihilation. 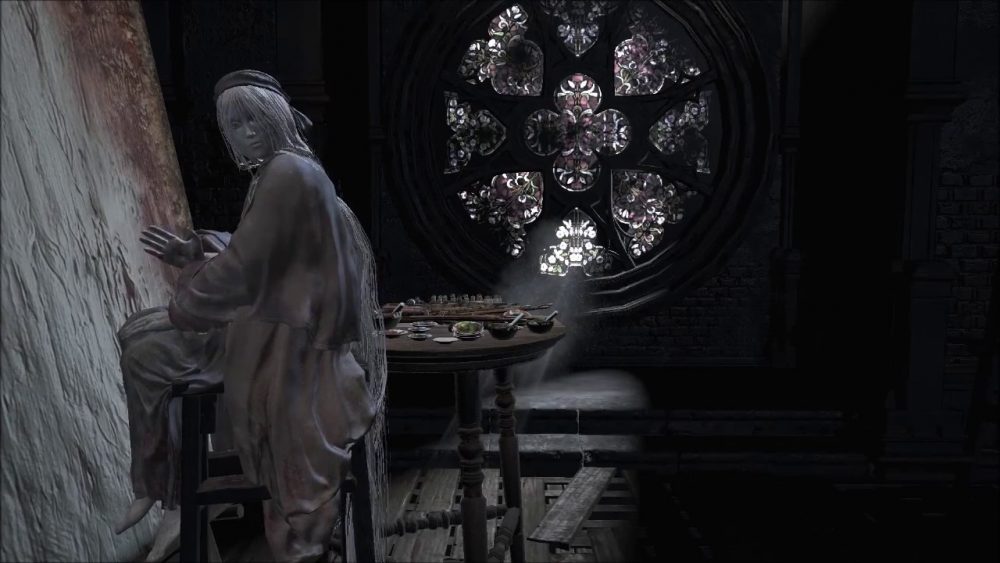 There are no real gods, no real ‘people’ in essence; just souls, and history is constantly confused by the process of re-creating worlds. I believe that all of the ‘worlds’ and ‘lands’ of Dark Souls are in fact paintings, paintings copied from other paintings. And during the process of copying, some of the details change, or are skewed, or even lost entirely.

Why are there so many pictures of the same red-robed woman in the Chapel of Ariandel? Is it to hint to us the real nature of things? Players inhabit thousands of parallel universes that are almost identical, but can be bifurcated by choices. Think about this: a non-player character, Anri, can summon the player to kill her nemesis Aldlich in her world, but when the player returns to their own world, Aldlich is still alive. The “convolution of time” Solaire describes is far deeper than that. Each person has their own world. At times, these worlds intersect, but most of the time they remain isolated.

What’s the first thing you do in Dark Souls? Name your character. It seems so insignificant. What RPG can’t you name your character in nowadays? But what if Miyazaki is pulling wool over our eyes? What if, in this smallest thing taken for granted, he’s concealing an incredible truth? That we’re not naming our character in the Character Creation screen, we’re naming our world.

Just as The Painter names the next world after us at the close of The Ringed City.

We already know that Painted Worlds are microcosmic, fully-functioning universes and that it is possible to build universes within these universes. Could this complexity not explain the complexity of both time and dimension in Dark Souls? Let’s consider a moment how players can travel into other worlds to assist other players: they use a White Sign Soapstone. The item description in Dark Souls III for this reads:

“The nature of Lothric is murky, unclear. The White Sign Soapstone allows Unkindled to assist one another.”

Pretty standard until we consider what soapstone is. Soapstone is a form of metamorphic rock that’s soft and malleable. It also retains heat (hence, Flame) and historically was used for sculpture and inlaid designs. In other words, it was used to create or place an image on something. Could this not be seen as a literal act of drawing oneself onto another canvas?

Previously, the geographical and historical incongruities between Dark Souls III and Dark Souls have been explained through the process of rebirth. With each linking of the fire, souls rise up again, the process of Hollowing is temporarily reversed (though it will soon decline again), and the story starts over. But what if these incongruities have arisen from the imperfections of each copied painting? 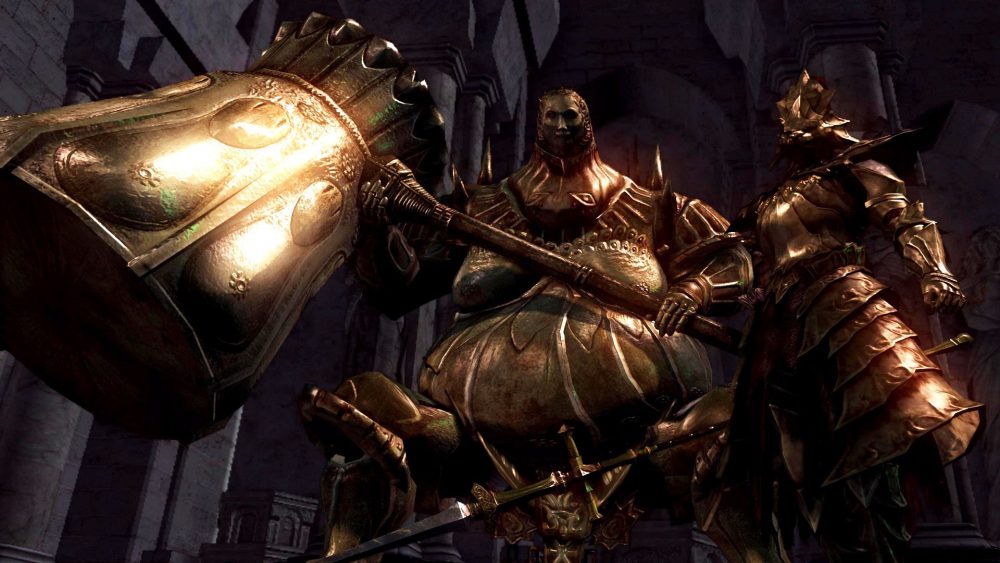 Ornstein, the Dragonslayer, is fought and killed something like four times in the series: In Anor Londo in Dark Souls, as the Dragon-Slayer in Dark Souls II, as Dragonslayer Armour in both Dark Souls III and The Ringed City, and maybe even as The Nameless King’s Stormruler dragons-steed (full credit to The Ashen Hollow for this last theory) at Archdragon Peak. Yet, other characters remain permanently dead.

Smough the Executioner, Ornstein’s fellow knight and tag-team partner in Dark Souls, never makes an appearance in Dark Souls III, though his armour and weapon can be found, describing him as: “the last knight to remain at his post, guarding the ruined cathedral.” What happened to him? How did he die? It seems that unlike Ornstein he did not come back after his battle with the Chosen Undead and was not born in the subsequent re-kindling of flame. Is it perhaps because Ornstein captured the imagination of a subsequent Painter and therefore lived on in various incarnations down through the ages, whereas Smough did not and therefore was left to rot in an older painting?

If what I’m proposing is true, it would make Gael even greater than he already is, because it would make him perhaps the first person within the world of Dark Souls to work out that everything was within a painting. I say “perhaps” because I believe it’s possible that Solaire, as someone who explicitly talks about the “convolutions” of time, might be another.

Solaire willingly accepts the curse and travels to Lordran in order to “seek [his] very own sun” but, after a long and perilous journey alongside the Chosen Undead into the very bowels of the earth and the ruins of Izalith, discovers no such sun exists. In the end, if the player manages to save Solaire, he assists the Chosen Undead in killing Gwyn, the God of the Sun, himself.

Does this nihilistic act (destroying the closest thing to that which he has sought his whole life) indicate a dawning awareness of the painted nature of all things?

The fact we never see Solaire again in the series also seems significant. Did this knowledge crush him entirely? Even though Solaire doesn’t go insane if you manage to save him from the Sunlight Maggot, he is still in a state of despair: “Was it all a lie? Have I done this all, for nothing? Oh, my dear sun… What now, what should I do…?”

Perhaps that is where Solaire and Gael differ. For Gael, upon discovering how inescapably far everything had fallen from reality, and that it would be the end of the everything not just the end of the painting if the scaled girl in Ariandel wasn’t allowed to paint her new world, decided to go to the Ringed City to retrieve the Dark Soul. Gael gave his life in the attempt to build a painting that would break the cycle, that would provide a final concrete world that could become their new reality.

Well, dear scholars, you have come this far, and for that I thank you. This essay has gone on long enough, so it is time for me to stop. But, I want to hear what you think of this theory. Could this be an answer to the deep mysteries of these series, or am I clutching at straws, seeking higher meaning where there is none?

As is fitting of Dark Souls, I leave it with you.