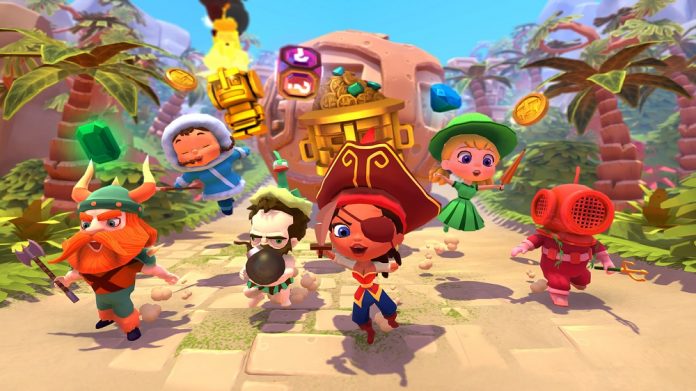 Marooners offers fast-paced fun in the form of intense minigames that change without warning. M2H’s title brings colourful characters, a novel concept and exciting gameplay to the table, but can it compete with the big names in party games, like Mario Party?

Offering online, offline and couch co-op modes, Marooners challenges you to slap, hit and sabotage your opponents to gain that coveted first place. The story is a simple one: you’re a cool pirate/caveperson/viking/diver/explorer. You love treasure. Turns out lots of other people do too, so you need to get to the treasure first – by any means necessary.

There are two main modes; party and arena. In party mode, there’s a range of minigames to play, each varying in difficulty. These range from Indiana Jones-style races with a giant rolling ball (and the occasional fiery obstacle to mix things up a bit) to challenges to keep your footing on a melting icecap (while collecting as much treasure as possible, naturally).

Now, you can choose to play the complete collection of minigames one-by-one, or go for all-out chaos and switch between them at random. The second option is Marooners’ biggest selling point by far, and offers a fun and truly unique gameplay experience. One minute, you could be at the front of the pack, digging through the floor to escape a collapsing roof, only to find yourself outside in the forest seconds later, getting shoved under a falling rock by your opponent.

There is a small pause at the start of each minigame to help you get your footing, but if you’re not paying attention, this continuous switching can lose you the match. This makes gameplay unpredictable and gives all players a chance at glory, no matter what your skill level, making it a great choice for all the family.

If you’re in the mood for some destruction, arena mode is exactly what you’re looking for. The one and only goal is to destroy your opponents in an array of environments. Power-ups, such as bombs and soaring boxing gloves, can give you the upper hand over other players and adds another layer of calamity to the gameplay. While this is a great way to satisfy your lust for violence, this mode is a mad free-for-all, and it often feels like you’ve won out of sheer luck rather than any actual skill. 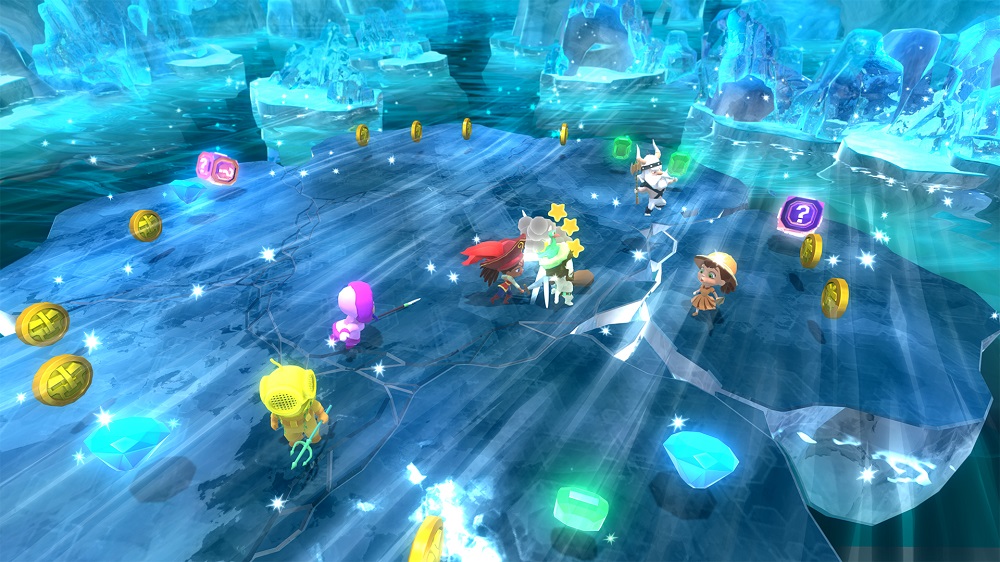 During each game, you earn points depending on your finishing position and how many coins, jewels and shiny golden statues you collect. No matter what position you finish in, your points go towards levelling yourself up and unlocking new items. These include different characters to play as and new weapons to strike down your enemies.

It’s best to play Marooners with your friends, rather than the game’s bots or unknown players online. A lot of the time you can’t get enough players to join, and when you do, you’ll end up in a match with players of varying skill level. This means that games often become a walk in the park and end up offering very little challenge. Granted, with the bots, you’ll definitely have enough players and you have a set skill level, but it takes a lot of fun out of gameplay.

Marooners has a good sense of humour, and doesn’t take itself seriously in the slightest. Characters are wacky and each have their own kooky celebration animations. Weapons range from the helpful to ridiculous, and include anything from a swashbuckling pirate’s sword to an acoustic guitar. As far as I could tell, these choices don’t impact your skill level or playing ability, but do make you look wicked-cool.

Marooners’ impressive array of character customisations are useful, especially in a game allowing up to six players in local and online mode. With the fixed camera view, it’s frequently quite hard to follow what’s going on during the more hectic moments of a match. It’s much easier to find where your character is if you’ve made them bright blue.

Although Marooners is fun, it’s limited. Once you’ve played it a few times, the novel concept of spontaneously switching between minigames becomes familiar and quite frankly, a little bit dull. It’s a great choice if you have a spare few minutes with your mates, but its lack of content can’t really compete with some of the bigger party games on the market. This may change once M2H have brought out updates and new DLC, but right now, Marooners is in danger of being left stranded.

Marooners is available on PC.