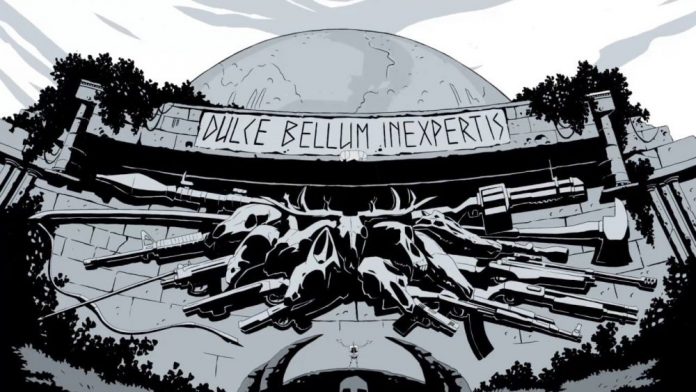 There is something very wrong with Nongünz.

That’s not a criticism of the game itself, far from it. In particular, it will immediately strike a chord with anyone who got a kick out the Silent Hill games. It’s not technically a survival horror, but everything about the game, from its bleak graphical design to the haunting soundtrack, will set you on edge.

Nongünz’s core gameplay is, at first glance, deceptively simple, yet it sports many clever twists which lend the game real depth. Controlling a pixelated avatar, you roam around a series of procedurally-generated dungeons blasting the unliving daylights out of all manner of equally monochromatic foes. These foes border on the distressing, not because they’re explicitly gruesome, but because of their pervading sense of “wrongness”.

You’ll be assaulted by hopping severed legs, shambling bio-mechanical monstrosities and all manner of other oddities. On your first playthrough you’ll be hard pressed to stop gawping long enough to shoot them. But you’d better shape up sharpish because while there are multiple ways to reach an exit, you’ll be knee-deep in corpses even before you reach the equally unsettling end of level bosses.

Combat in Nongünz is a joyfully frenetic affair which, since you can only usually fire horizontally, involves a fair amount of platform hopping. You have a couple of fancy moves at your disposal, one of which grants you a few milliseconds of invulnerability but health is always at a premium; particularly since the game employs a unique, if slightly sadistic, health mechanic.

The only way to gain health in Nongünz is to “burn” the power-boosting pickups you’ll come across which themselves require you to sacrifice health to access. End up in a tight spot and you’ll find yourself agonising as to whether you should sacrifice a pick-up or hope for the best. It’s a beautifully balanced system that has you constantly second guessing yourself and adds another layer to Nongünz’s already appealing gameplay.

But what really elevates Nongünz is (and believe me, I never thought I’d say this) the “cookie clicker” inspired aspect of the game. Buffs and weapons, ranging from the effective to the insanely powerful, can be purchased using points which are received when you fire your gun or slay an enemy. But as you progress you’ll come across “followers” locked in cages. Free them and they’ll appear in the graveyard, worshipping you. Their misguided prayers boost your points, giving you the freedom to purchase better weapons. Furthermore, just sitting there, watching your points tick over is oddly addictive.

As is the case with the bulk of the game’s features, there’s a snag which stops you from getting too cocky. As you might expect, the further you progress through the game, the stronger the enemies get and the tougher survival becomes. But die once and you lose all your points, weapons and your progress, except for the followers you’ve accrued. At any point you can leap out of a nearby window (not as painful as it sounds) and retain your weaponry and points, cutting your losses leaving you, once again, with a tough decision to make.  Nevertheless, Nongünz manages to retain its appeal on subsequent excursions, repeated playthroughs remaining a joy rather than a chore.

Nongünz isn’t without its flaws, though they’re relatively minor. The plot is scant at best, as is the game’s tutorial, the designers stating that they intended that it be “obscure in both gameplay and theme”. And while you may not notice the absence of a plot, the lack of a detailed tutorial or instruction manual is initially problematic. I found myself becoming irritated with Nongünz’s difficulty until I jumped on the game’s forums and discovered the aforementioned “follower” and “window exit” options at which point the game clicked.

I honestly have no idea how Nongünz was conceived; it draws upon a range of diverse genres, cramming together elements that you wouldn’t think would work in concert. Yet the end result is really something special; a shooter with brains that’s not only haunting, challenging and utterly compelling but, thanks to its procedural nature, is hugely replayable. Throw in the game’s budget price and you’ve got no excuse not to go for your Nongünz.

Nongünz is available on PC.