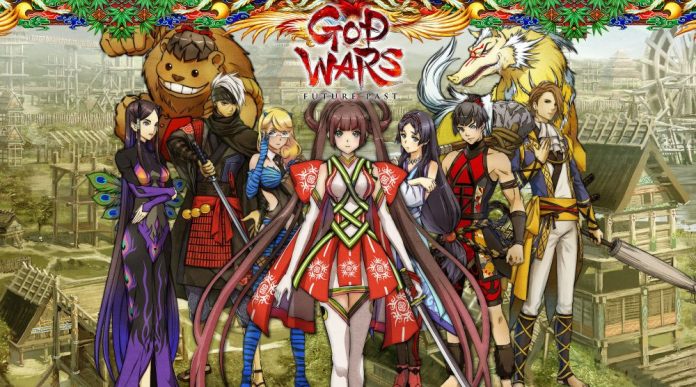 God Wars: Future Past is all about the battles.

True, the game is rightly marketed as a tactical RPG, but even so you’ll still be surprised by just how much time you spend actively engaged in combat. There are brief pauses for the game to relate its improbable plot and allow you to tweak your party’s skills but you’ll spend the bulk of God Wars‘ 20+ hour length engaging in fisticuffs with a range of anime-styled fiends.

Yet so much attention and care has been lavished upon God Wars’ combat system that battles are rarely a chore.  It’s (very) loosely inspired by Japanese folklore and history, meaning that swords, arrows and spells, rather than light sabres and laser guns, are your weapons of choice. Not that repeatedly spamming spells at your opponents will guarantee victory; God Wars’ cutesy graphics belies the game’s complexity, which necessitates that you think strategically lest your party meet their demise.

In fact, tackling God Wars is rather like playing a game of chess, except that half your pieces have been removed from the board before you started, your party of up to six characters having the odds stacked against them. When I was first getting to grips with the game, I failed to appreciate just how important it was to consider my moves beforehand. On several occasions, the sense of elation I felt at obliterating a foe evaporated when I realised that I’d left my character within striking distance of several other enemies. Due to God Wars’ turn-based nature, this proved to be a fatal mistake and I had to watch as my target’s still living comrades tore into my formerly victorious warrior.

There are a wealth of other considerations to take into account, apart from just unit placement. Battlefield elevation comes into play and while standing on a lower level than your opponent won’t necessarily get your legs chopped off, you will take more damage. Conversely, you can inflict more damage on your enemies by taking to the high ground. You’re also in for a shock if you’re used to enemies just lining up for the slaughter as they will flank you whenever possible. You may end up kicking yourself because you failed to spot an enemy unit creeping into strike distance, though you’ll have no-else but yourself to blame. The controls are intuitive and easy to master enough that you can’t blame them either. 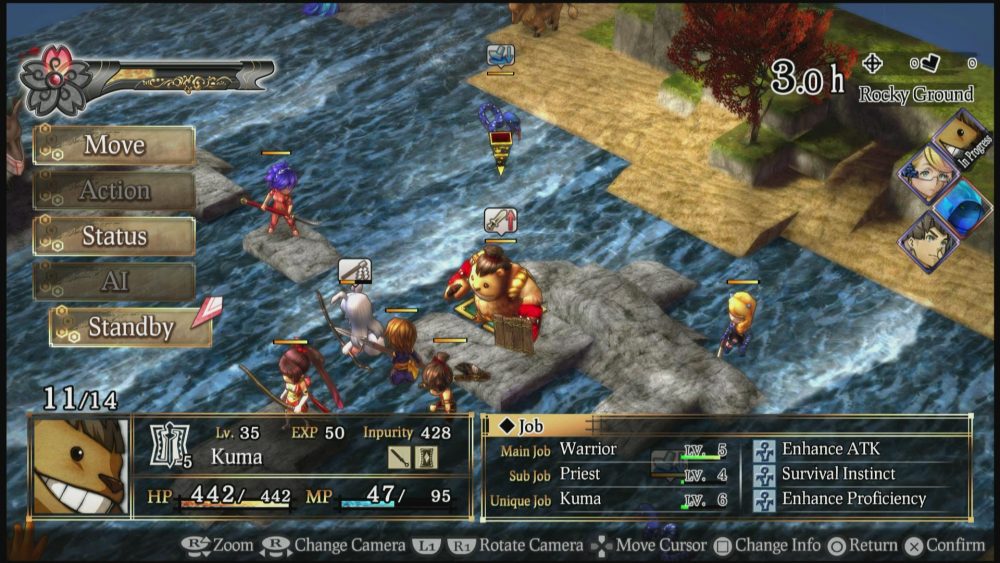 And that, in essence, is what makes God Wars’ core gameplay so appealing; while there are some random elements at play, victory is always in your hands. The more time you spend with it, the more you come to grips with its mechanics. The game never becomes a cakewalk, but success is all the sweeter when you know you’ve earned it and failure rarely feels unfair. God Wars‘ appealing graphical style also marries modern looks with the old-school aesthetic it seeks to emulate; though I still did find it mildly disconcerting that it looked like I was sending a bunch of five year olds into battle.

Nevertheless, there are times that God Wars outstays its welcome. Battles can be lengthy and you’ll sometimes find yourself yearning for a break from combat. Short of pausing to level up your characters, however, there are no real diversions to be had; the game is very linear, giving you no freedom to explore. On several occasions, one of the characters piped up explaining that she needed to visit a particular location. In any other game you’d be given the choice to either proceed to your next destination or, if the location was quest critical, to return to it later. In God Wars, you’re forced to take a diversion and given no say in the matter.

This would be less of an issue if the game’s story was sufficiently engaging. It starts off strong, with the grim scene of a woman sacrificing her daughter to a volcano, one of her remaining daughters ending up in your party; but this tale moves at such a glacial pace that you’re never drawn in. Aside from Lady Tsukuyomi, the sister in question, none of the characters are particularly interesting. The “main” character, the one you’re presumably meant comes across as arrogant and unlikeable and, as if the game recognises this, ends up side-lined by the narrative. Lacking a truly compelling story, the game sometimes fails to maintain forward momentum and as a result, you may find yourself wanting to step away from it.

God Wars is at its best when you’re in the heat of battle, brain firing as you process each possible move; you’ll appreciate the depth of the combat system and the wealth of possibilities that it offers.  But prolonged play can start to feel like a grind, meaning that God Wars: Future Past is a game that’s best enjoyed in small doses. A lower price point would also make it a far more appealing prospect, the game currently being sold as a full-priced release.

If you’re looking for an expansive RPG or JRPG that marries world exploration with a myriad of gameplay elements, you’re not going to find it here. But if complex, entertaining battles float your boat, and you can tolerate the lack of diversions or deviations, then you’ll be in your nostalgic element with God Wars: Future Past.

God Wars: Future Past is available on PS4 and PS Vita. We reviewed the PS4 version.