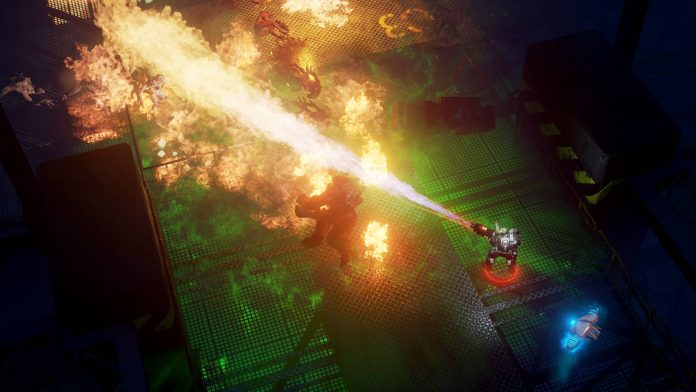 I previewed the title back in March, and was intrigued by what I’d played. Obviously since then, developer Ironward has tuned aspects which I fully expected. I completed Solstice Chronicles: MIA twin-stick shooter (easily playable with mouse and keyboard) story mode on the recommended difficulty, initially resulting in the game being a cakewalk. However, the story’s devilishly ramping difficulty steered me into using other tactics, and then even more further in. But that “further in” becomes a case of running to your objective, avoiding as many big enemies as possible.

Man has colonised Mars following the disastrous STROL virus which infected Earth’s population. Powerful corporations rule the colonies of Mars, but insurgents are fighting for control of the planet, and both sides are searching for the cure. The STROL virus has now spread to a colony on Mars. That infected colony is home to a sole survivor – a grunt whose corporation left for dead, and that grunt is you. Teaming up with the occasionally amusing drone Saffron, you must fight your way out, and maybe find a cure to this virus that has all but wiped out humanity.

The most interesting mechanic in Solstice Chronicles: MIA has stayed the same from my initial preview of the game. Your drone, Saffron, possesses the ability to change the current threat level on the fly. Her four abilities – Scout, Bomb, Block, and Taunt – each have their benefits and weaknesses. Scout and Bomb benefit you greatly with resources and explosive damage respectively, but at the cost of a higher threat level spawning more enemies. Block and Taunt will each reduce the overall threat level, but spawn more waves of enemies for you to deal with first – including bosses.

I near enough exclusively just used Bomb and Taunt during the story. The higher the threat level, the more enemies will be after you at that time. To be even more helpful, Saffron is later able to build barricades, turrets, napalm bombs and more for when the going gets tough (and when the going gets tough, the tough gets going). Napalm Bombs are your go-to “I need to kill that huge enemy” buildable item. With the loot seemingly randomised, you’ll need to pray for good buildables when you see them.

There are four classes to choose from: Soldier, Demolition, Hellraiser, and Terminator. (Hellraiser wasn’t available with the review build, and Terminator doesn’t unlock until you complete the story.) Whichever you play as, each character has three skill trees and only one pertains to the given class; the other two are General and Drone related. I like the talent system; there are many choices on skills to test out and then upgrade once you find a setup that suits you. 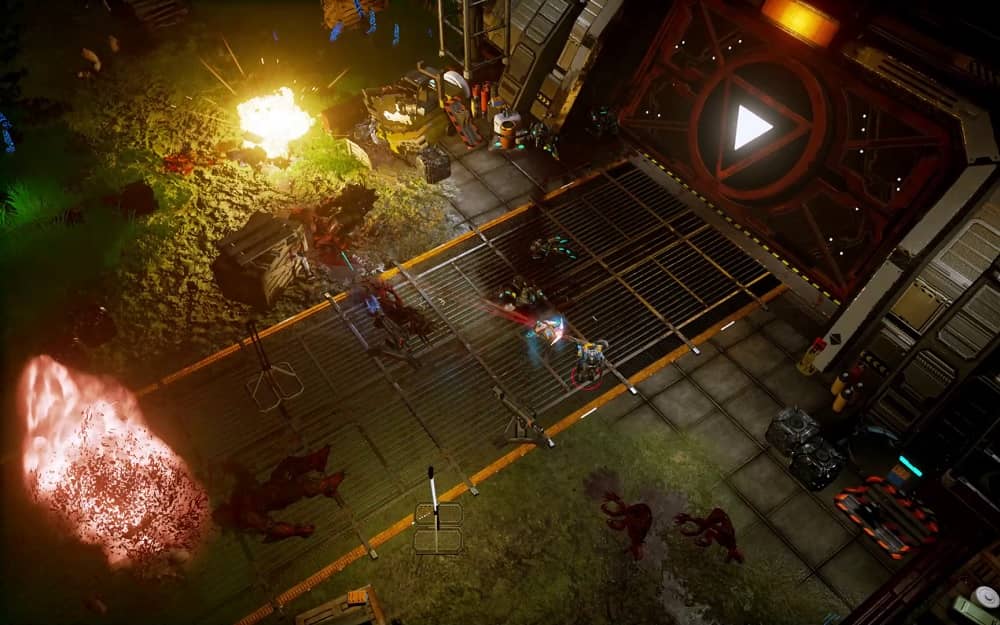 Soldier benefits from more melee damage and better bullet usage, Demolition can increase overall skill damage and help Saffron build objects, and Terminator can use his class skill more frequently at the loss of suit integrity (once suit integrity is low enough, you can’t get revived by Saffron and must restart from a checkpoint). Demolition quickly became my favourite class to use in Survival because Saffron is able to build more out of one buildable item when using this class.

Solstice Chronicles: MIA‘s story is a little hard to follow at times, leaving me to ask myself, “wait, which organisation are they again? Who’s that again?“. There are, however, some funny well-written interactions between your character and Saffron which make up for it, including the  line “Who’s your maker? Mary Fucking Poppins?“. Brilliant.

Unfortunately, the ending to Solstice Chronicles: MIA is a cliffhanger baiting for a sequel that doesn’t actually give any satisfying conclusion. I completed the story in about five hours, and after that, you’re expected to run through it again on a different difficulty or as a different class, or you can move onto the Survival mode.

I thought Survival would be a basic horde mode, but it’s a bit more complex then that. Wave after wave of enemies still come, sure, but after every one or two waves you can evacuate and keep any upgrades you picked up that run. There are some objectives during survival which start with turning on power relays – something you do a lot throughout the story as well. Completed objectives don’t carry over so entering Survival always starts you at wave and objective one again. What I do like about Survival is evacuating with upgrades and skill point unlocks to come back in stronger and last longer next time, and each time developing more tactics on how to survive longer.

The boss fights throughout Solstice Chronicles: MIA‘s story are pretty disappointing; they tend to divulge into running away for a period to let your health regenerate then trading some damage; either that or you find a way to cheese it – which is exactly what I did for one fight: I set up four turrets, ran around in circles so the boss couldn’t hit me, and let the turrets do all the work.

The final fight right at the end of the game literally consisted of me running around for 5-10 minutes with the objective ‘survive’. The tactic of avoiding bigger slower enemies became pretty useful deep into the second half of the story. Following that with a disappointing ending is not a great way to finish the story.

While I seem to have dwelled on quite a lot of negatives as I’ve written this review, Solstice Chronicles: MIA does have plenty to enjoy. Most of the gameplay is engaging, and when you’re using all its mechanics and systems as intended, it’s fun and gels well. It’s nice to look at; the lighting is very effective especially when having to use your own flashlight to see enemies around you. Exploring can be rewarding too, with upgrades or extra ammo. The story is a bit clichéd, but the interactions with Saffron can distract you from that.

Of course, I imagine you’d have more fun playing Solstice Chronicles: MIA in co-op, so if you can, do.