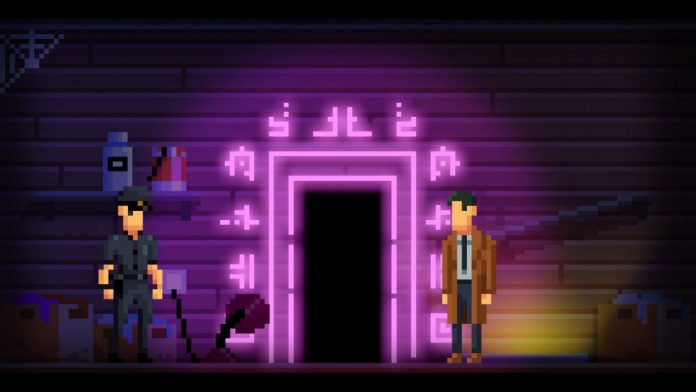 I’ve been a fan of point and click adventure games since playing the original Broken Sword over 20 years ago. My love of silly humour and all things weird has been a lifelong condition, however.

With that in mind, it almost feels like The Darkside Detective, a point and click adventure game developed by indie studio Spooky Doorway, was made just for me. It has classic point and click gameplay in which you need to converse with a colourful cast of characters and scour scenes to find interactive elements and items, oodles of witty humour with occasional pop culture references, and each and every one of its six cases that it asks you to crack has you dealing with a force that is monstrous or supernatural.

You assume the role of Detective McQueen, the star of Twin Lakes police force’s Darkside Division. He’s accompanied on his cases by the air-headed Officer Dooley, but all he’s really good for is a bit of light relief. Still, they make a great team, and by the time you’ve reached the end of The Darkside Detective, your heart will be wide open to the both of them. The graphics may be pixelated and the voice acting non-existent, but that doesn’t stop Detective McQueen and Officer Dooley from growing on you like an invasive but strangely comical and comforting wart. When the credits finally roll and you’re forcefully detached from the pair, you’re likely to feel a bit down.

It all comes down to the writing, which in The Darkside Detective is absolutely wonderful. Characters have actual character, the gags are genuinely funny and well-delivered, and each of the six cases have their own storyline which keep you on the edge of your seat until they are resolved. The Darkside Detective takes inspiration from the likes of Twin Peaks, The X Files and even Gremlins to deliver a point and click adventure that’s kooky, clever and a hugely enjoyable way to spend four or so hours. 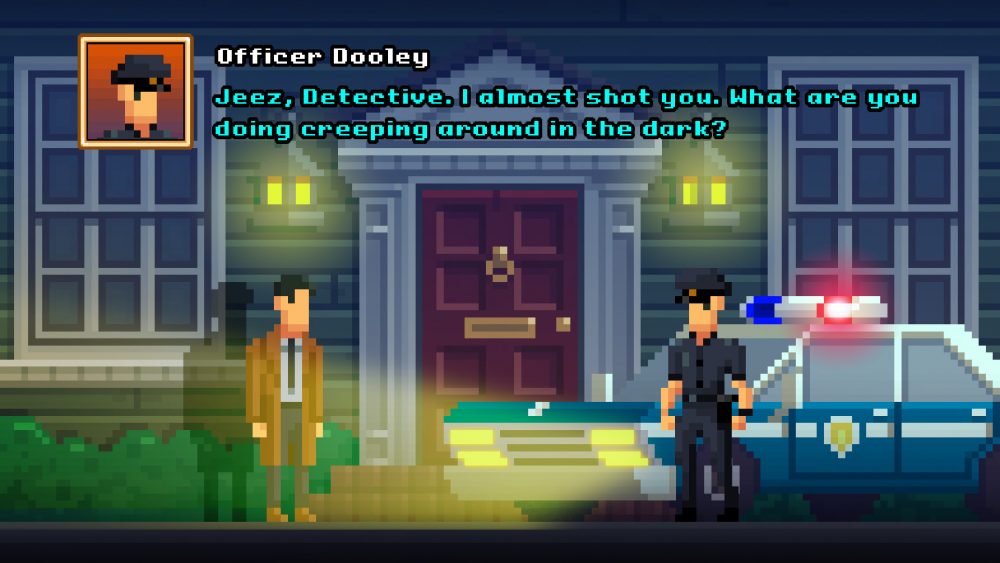 Initially, there are only two cases available for you to solve, with a further four opening up one by one as you complete them. Gameplay is the usual process of scanning over scenes, looking for object in the environment to interact with or pick up to use elsewhere. Sometimes you’ll need to get your thinking cap on, using your logical reasoning skills to work out which items need to be combined to solve the problem before you. Unlike many point and click adventures however, The Darkside Detective rarely faces you with a puzzle that feels infuriatingly obtuse.

For the first few cases your brain will be eased in, challenged but not truly tested. The later cases, however, up the ante, making you think more outside the box. And when you do get stuck, moving between scenes is pretty much instantaneous, making going back and forth to look for the item or interactive element that you’ve missed feel simply like a process rather than a chore.

All of the components – the humour, the horror, the puzzles, and the characters – of The Darkside Detective add up to create one of the most entertaining and rewarding point and click games I’ve ever played. It was great to not be made to feel like an imbecile because I didn’t know I needed to combine an apple with a tin opener before placing the unlikely contraption I’d created in a microwave to continue, something which many games in the genre are terribly guilty of.

The Darkside Detective is great for those, who like me, enjoy the intellectual silliness of creations like Garth Marenghi’s Darkplace. It knows it’s daft every step of the way, it’s meant to be, but there’s a cleverness behind it all that’s charming and refreshing. And like Garth Marenghi’s Darkplace, I feel it’s destined to become a cult classic. Make sure you play it now, rather than in a few years time when it features on lists of underappreciated indie gems, yeah?

The Darkside Detective is available on PC.