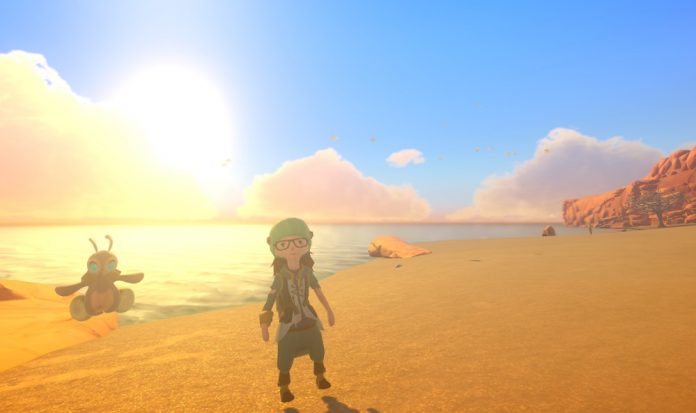 I don’t know about you, but sometimes I get sick of continually fighting against evil forces in video games.

Sometimes it would be nice to just have a relaxing adventure, pottering around pretty fields, interacting with animals and doing pleasant little quests for nice people who don’t want to murder you the minute you turn your back.

Yonder: The Cloud Catcher Chronicles is just that. Set in an open world devoid of any combat, the game focuses on adventuring, exploration, completing quests, crafting and gathering. It might sound a little bit dull, but trust me: it couldn’t be further from it. Yonder‘s an absolute delight of a game, and I’m completely hooked.

It’s hard not to draw comparisons to Zelda. There’s certainly an Ocarina of Time vibe to Yonder; the way you explore the map and visit towns and regions clearly distinct from one another. Talking to villagers and setting about on quests invokes memories of Link’s adventures too, and it’s no bad thing.

The main difference, of course, is that there’s no fighting to be had here. It feels a little unusual at first – I mean, when was the last time you played an open world adventure game that didn’t have some kind of combat? It’s a thoroughly refreshing change though. When stepping into new territory, you don’t have to worry that you’re going to encounter enemies that are too strong for you. You don’t have to panic that your armour and weaponry isn’t powerful enough to defeat the next boss you find yourself facing. You don’t need to worry about anything, in fact. Yonder: The Cloud Catcher Chronicles is one of the most enjoyable and relaxing games I’ve had the pleasure of playing.

There’s a main storyline to follow, taking you to the far reaches of a gloriously varied world, through blossoming forests, snowy mountain peaks and rolling fields. Every environment is as gorgeous as the last, and even if your task at hand is a simple fetch quest, it doesn’t matter when you’re travelling through such staggering scenery.

Outside of the main campaign, there’s a plethora of side quests and adventures to take part in. Missing cats to locate around each region, materials to gather, villagers to help, secrets to uncover. Crafting and building plays a big role in the game, too; you can craft a range of items from inside your inventory, and there are also several farm buildings dotted around the map that you can restore and operate in order to generate more resources for yourself.

I’m only around half way through the story so far, so I have quite a bit more time to put into Yonder, but I’m loving every moment. While the lack of combat is likely not going to suit everybody, I’d highly recommend giving it a go if you’re looking for a more chilled out gaming experience. Honestly, every moment with Yonder: The Cloud Catcher Chronicles is such a pleasure.

I’ll have a full review of the game later this week. Until then, you can find out more about Yonder on the official website, and you can watch 20 minutes of gameplay footage in the video below: