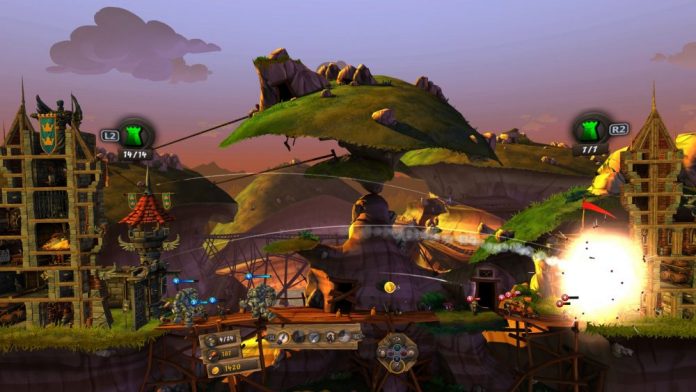 CastleStorm VR is the most unconventional PSVR title I’ve played to date, but that’s certainly not a bad thing by any means.

I have what I feel are two guilty pleasure genres in gaming: strategy and tower defence, and CastleStorm sits firmly in the middle of these two genres.

Coming from Zen Studios, the minds behind the frankly sublime pinball series Zen Pinball, CastleStorm VR sends you to medieval times to defend your keep from marauding Vikings, while attacking their castle when the opportunity presents itself. Played from a front-on perspective, each side can produce units to send to attack their opponents and herein lies the most tactical element of the game and you’ll need to look side-to-side with the PSVR to see everything before deciding your next move.

While these units can vary from the lowliest donkey-mounted foot-soldier to a soaring Griffin, in practice, the combination of units that you use will be more down to your own personal preference than to the environment or objective. If you’re heavily into defence and prefer to assault the enemy castle from a distance, you could station an army of archers on your doorstep and fire projectiles from the safety of your castle walls. Alternatively, those who believe attack is the best form of defence may prefer to send a marauding stone Golem with a couple of Griffins and some knights to attack the opposition. Either way can be great fun and will likely get the result you want.

Each unit will cost you food which can be produced over time. It’s worth bearing in mind that there’s a limit to how much food you can store, how quickly you can produce it and to how many units you can have in-play at one time. All of these, along with a whole host of other functions, are controlled by your castle, or more specifically, the rooms you choose to put inside your castle and each one can be improved by upgrading using coins earned during gameplay (more on that later).

As I touched on earlier, CastleStorm is literally all about tower defence in that you must defend your tower from the opposition’s advances, while similarly attempting to win the round for yourself. Playing as either The Kingdom or the Norse Vikings, the story around this clashing of clans is simple but genuinely amusing as your on-screen avatar deals with one ridiculous situation after another. Your options for destroying your opponents are either to raze their castle and all of the rooms it contains to the ground, or to send a sortie to raid the position for their flag. There are other modes available (Survival, Skirmish or Hero survival) but essentially, these are just window-dressing for the tower defence mechanic. 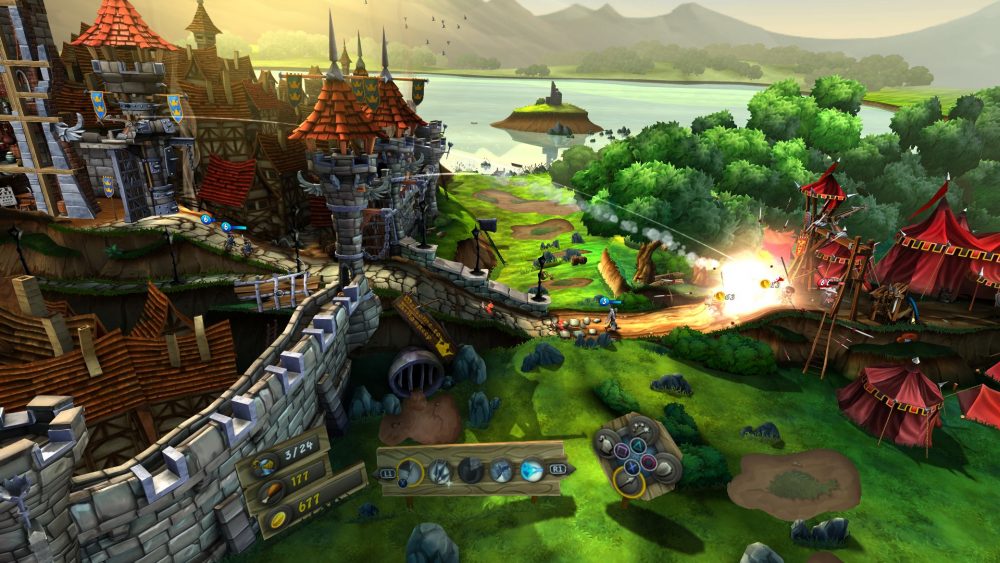 Having and commanding a small army is great and all, but you’ll get the most use from your ballista; a large catapult, mounted above the main entrance to your castle. From this, you can fire a wide variety of weapons including javelins (or harpoon, depending on which faction you’re playing as), rocks, a large Morningstar or even a Battering Sheep (shouldn’t that be Baa-ttering Sheep?).

Each weapon has its own advantages with javelins being quick-firing and accurate while your larger or more explosive options, like the Apple Grenade, are great for taking out an angry mob as they bear down on your position. In a smart design move, friendly fire is present, so you can’t just spam the field with arrows without taking out some of your own guys.

Unfortunately, the ballista also presents one of the larger gripes about CastleStorm VR: the controls. Aiming the ballista is a fine art which takes a minute to learn and a lifetime to master, though experience certainly aids you after a while. There’s also the slightly awkward method of choosing whether you want a unit, spell or a projectile and then cycling through those available with L1 or R1. Fortunately though, this side of things feels incredibly tricky to begin with, but after perhaps half-an-hour you’ll be skipping from casting a healing spell to firing a Battering Sheep or producing a Priest in no time.

If this still isn’t doing it for you, then among other spells available to you, you can teleport your avatar (Sir Gareth, a brave Knight of the realm for The Kingdom of Freia, or a firey Viking warrior for the Norse) into the game to lend a hand. They may only possess a simple skillset with just a couple of sword attacks and a bow and trusty shield, but used at the right moment, this could turn the tide of the battle. The spell will expire after 30 seconds, mind you, so make it count! Other spells include a shield for your castle to protect it from projectiles, a health-boost for a handful of your soldiers or even a direct attack upon the enemy infantry. Like the food, the power, duration and recharge times of these spells can be improved by upgrading the relevant areas of your castle.

Which castle you’re defending can be chosen before each round and it’s not only the aesthetics that vary. As you progress through the story, you’ll unlock new rooms — early castles can only hold a few of these, while later, larger castles can fit many more. There’s a Treasury, for instance, which generates additional coins at the end of a round and the amount you can receive can be increased by upgrading. Similarly, the pantry can provide food faster if it’s upgraded, so you needn’t wait so long to produce new units. The ultimate test is to build your own castle to defend, choosing the rooms you want and the protection they’ll have against projectiles while you defend from the front. 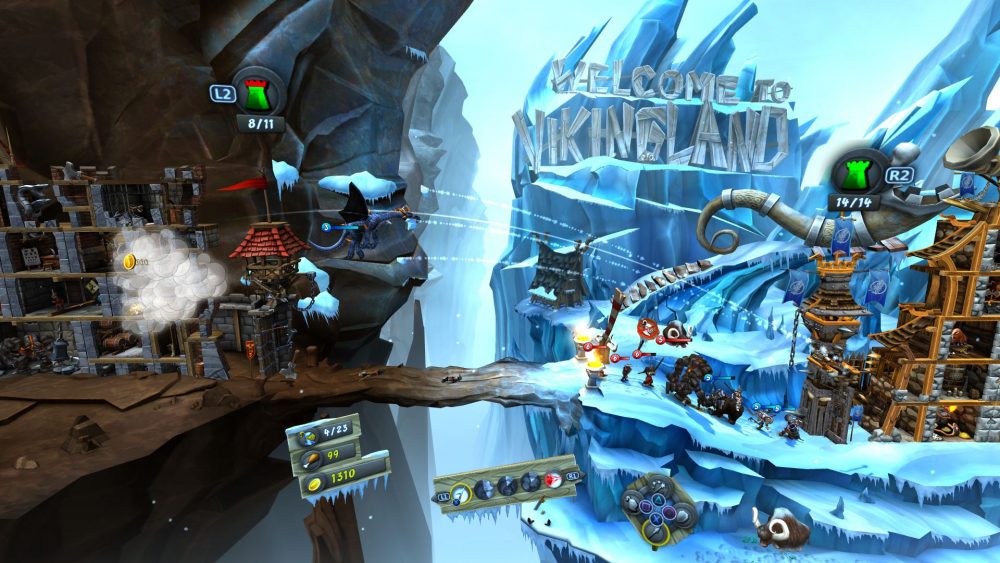 Playing CastleStorm VR with the PSVR headset is a cinch and is a real and genuine pleasure. The stylised visuals look crisp and colours really pop as you see the blues and yellows of The Kingdom go up against the reds of the Vikings. The whole experience is buttery-smooth, too, with cut-scenes neatly displayed in a cinema screen, complete with virtual-soda and popcorn, so you don’t experience any motion sickness as the camera pans around between characters. In fact, despite the unusual source material for a VR, CastleStorm VR is up there with my favourite PSVR games. It may not be a huge title from a huge developer, but the whole package is almost perfectly formed.

I say “almost” as the main detractors are tough to ignore. The aiming system seems to believe it offers enough, with analogue controls for the bulk of the work and the left or right buttons to make minor adjustments, but in the heat of a battle, there simply isn’t the time to be so precise. The campaigns, too, are too thinly disguised to come across than anything other than preludes to the online, PvP elements. Fortunately, these are only minor issues and do little to spoil the fun.

CastleStorm VR is the same game that was released a few years ago, but the new VR elements once you pop the PSVR headset on make it feel like new. The gameplay is addictive, the story enjoyable and while the graphics aren’t cutting edge, the game’s overall aesthetic is what pleases the most in this respect. The variety of units available for each faction means you can play the same levels in different ways each time without a fear of trying new things. CastleStorm VR is a great example of a developer thinking outside the box with VR and I hope to see more titles like it appear in the coming years.

CastleStorm VR is available for PS4 and Oculus Rift. We played the PS4 version.