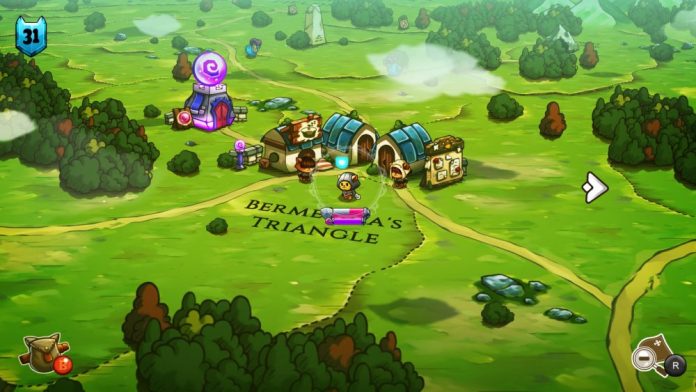 Sometimes, games just have a certain quality that makes them fun regardless of their shortfalls. Cat Quest by independent developer The Gentlebros is one of them.

With your sister kidnapped by a sinister looking cat named Drakoth, Cat Quest has you taking control of cute little feline avatar on an adventure to save her. Things soon get more complicated, however, when it turns out you may actually be a Dragonblood – one who has the power to destroy dragons. And so with Drakoth out of your grasp until you’ve become a formidable Dragon-busting little kitty, you engage in quest after quest in a bright and colourful open world, bringing peace and prosperity to its inhabitants while also upgrading your arsenal. Or something like that.

Mostly taking place on an overworld that feels like it’s been ripped out of a JRPG from the nineties, Cat Quest rarely pulls you out of the action for more than a minute at the most. Moving around its world, you’re always finding towns and ports (or pawts, as the game likes to call them) with quest boards begging for your attention, or abandoned ruins and caves for you to explore and plunder. You’re always being rewarded with gold and experience, and maybe even a new piece of equipment. Boredom seldom has a chance to rear its head as there’s always something nearby to do, or at least kill. 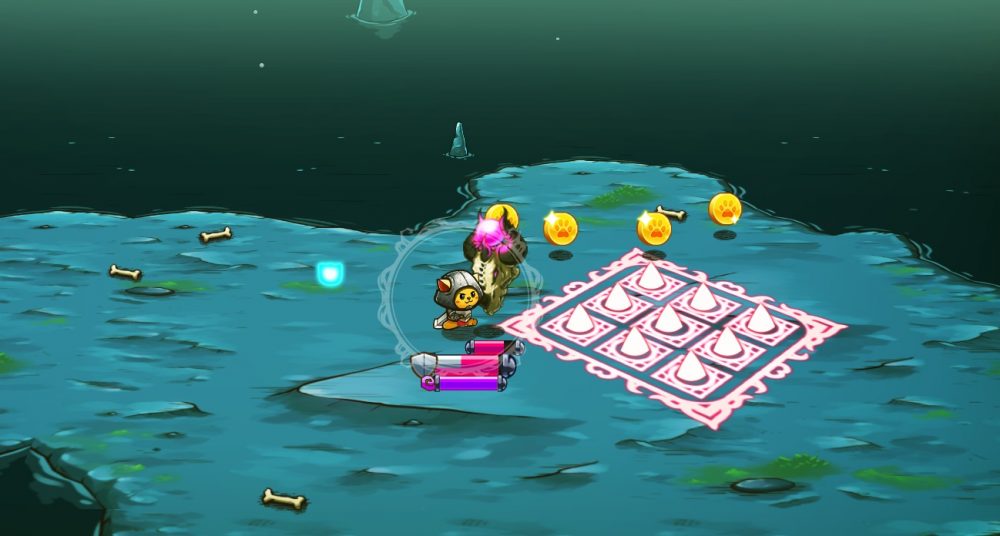 Combat plays a large role in Cat Quest, and thankfully, while basic, it’s pretty robust. You have one button to attack with whichever weapon you’ve got equipped, one to roll out of the way of danger, and four that can be assigned to spells of your choice out of an eventual selection of seven. Unusually, offensive spells have a specific area of effect that always originates from your position, meaning that to use them effectively you need to consider where your enemies are located in relation to you. It’s also the case for those used by the enemy, with the area of effect being displayed for a short while before the spell is performed to give you time to move out of the way.

While spells are undoubtedly useful, melee is the bread and butter of Cat Quest‘s combat. So much so, that hitting your enemies up close and personal is required to refill your magic-enabling mana in the heat of battle. Moving in close and hammering the attack button results in the same flurry of hits regardless of whether you’ve got a mace, staff, sword or axe equipped, and a handy circle will appear under an enemy when it’s about to initiate a counter-attack so that you can roll out of the way. It goes some way to create an enjoyable ebb and flow to battle, but again, you’re not going to find much depth other than upgrading your spells and finding how they can be best combined to make shorter work of your foes.

For me, what really pulls Cat Quest together is its humour, which attempts to keep a smile on your face from beginning to end. From cat puns to amusing pop culture references, The Gentlebros have done a great job in making a world that’s light-hearted, comical and thoroughly entertaining to be in. Some people may find it all a bit saccharine maybe, probably those who hate cats and who are ignorant of shows like Twin Peaks or Game of Thrones, but I imagine most will be constantly amused by its witty dialogue and visual cues. It’s a game that has character, and I like that.

Of course, all games have their problems, and Cat Quest is no different. Its ending I found to be very anti-climactic, though I was pleased to find that I could still explore the world afterwards and finish up any quests that were unresolved, and as action RPGs go, it’s rather basic and woefully repetitive. Yet, despite the gameplay never opening up or offering much more than what are essentially fetch quests, whenever I sat down to play it I found myself glued to my seat. Cat Quest is one of those games that’s just absorbing, and the lack of loading screens or lengthy exposition means that it’s easy to see past its flaws and just carry on your merry way.

Cat Quest isn’t perfect, not by any means, but it’s a good old-fashioned action RPG that understands the value of keeping the player busy and not interrupting what’s important – the action. You’ll get the sense of deja vu frequently as you enter yet another cave that looks essentially the same as the last, or take on another quest that demands you trail a missing shipment or whatever, but you know that it’ll be over in five minutes and you’ll get a nice reward for your efforts so you soldier on. Seven hours or so after starting your adventure the main quest will be over, but it speaks volumes that you’ll probably still want to go and explore the world and grow stronger still. It’s not because Cat Quest is deep or meaningful, it’s because it’s just fun, and that’s all a game needs to be.

Cat Quest is available on PC, Switch and PS4. We reviewed the PC version.