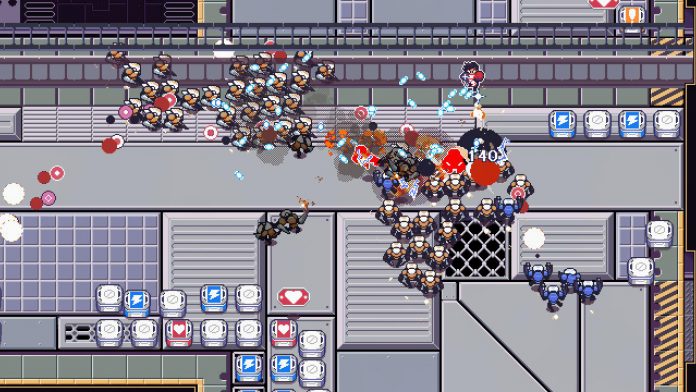 45 minutes in and I’m beginning to think I’ve seen everything Circuit Breakers has to offer me.

Three and a half hours in and I’m sure: I saw everything Circuit Breakers has to offer me in the first 45 minutes. Probably not even as long as that. Maybe 15.

Now, if that sounds bad to you, that’s probably because I’ve not explained anything about Circuit Breakers yet. Circuit Breakers is the most arcadey arcade game I’ve played since the last time I actually went to an arcade. Seriously, after I lost all my lives I was patting down my pockets for another pound coin to throw in. And I wanted to throw it in.

So, what is it? Well, Circuit Breakers is a top-down, twin-stick shooter. That’s really all it is. Actually, it’s not; you don’t even have to use the sticks – you could play this on a SNES pad. You run around, avoid enemy bullets and shoot guns until things explode. Done.

The introductory plot – one that’s never really mentioned beyond giving you that classic arcadey frisson of a storyline – concerns something about robots and maybe them trying to take over the world…? I can’t remember. That’s how much it matters. 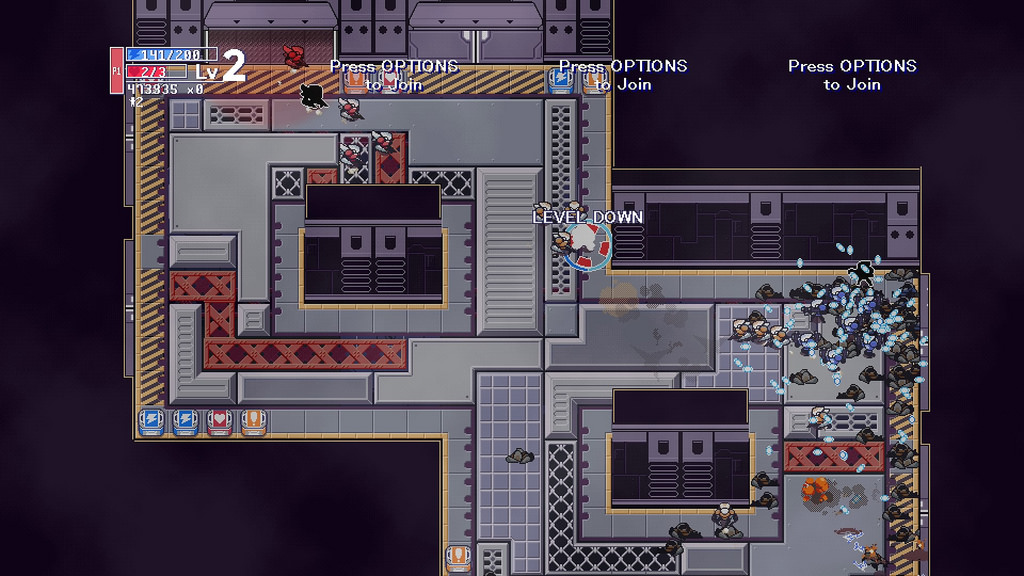 Alongside the arcade-thin plot, simplistic gameplay and easy peasy control scheme, Circuit Breakers even features old-school retro arcade graphics, classic arcade sound effects and great thumping music. It does do some stuff to make it stand out, though. While multiple playable characters with different weapons are nothing new, I’ve never really played a shooter that made them feel so very different; honestly, it was almost like playing a new game with each new character.

We all know that machine guns have different weapon dynamics to shotguns, rocket launchers and lasers but, when coupled with Circuit Breakers’ second major difference, your choice of weapon will have some dramatic effects on your overall tactics.

That difference is in an otherwise quite mundane pickup; the in-game element, Energium. As opposed to other in-game pickups, Energium charges your weapon, charges your shield and helps you level up your weapon – Cave Story style – so that it’s stronger or faster or has special abilities. The only problem is that, when you shoot your weapon, you deplete your store of Energium. So, in order to keep your weapon level high, you’ll need to carefully control your shots so that you can immediately pick up more Energium to replace any that you lost.

Energium harvesting, then, is crucial to you progressing through Circuit Breakers’ random levels – not randomly generated, just played at random. Fortunately, you can generate it by killing enemies (or destroying one of the game’s three types of chest: Energium, health or explosive) so there’s a ready supply of it. But to get it and keep yourself topped off, you’ll need to be pretty aggressive – especially since, as with all good arcade games, the resources disappear after a short amount of time has passed.

And that’s where the different characters really make the game come to life. It’s easy enough to be aggressive with a machine gun, but you’ll burn through Energium really quickly and there’s a chance you’ll just keep firing at nothing while you re-focus your attention on the next group of enemies. The laser is more stand-offish but hits hard and hits multiple enemies in a line. It’s also fairly quick to upgrade but you’ll need to plan well ahead to line up your shots for maximum impact, forcing a more thoughtful style of play. 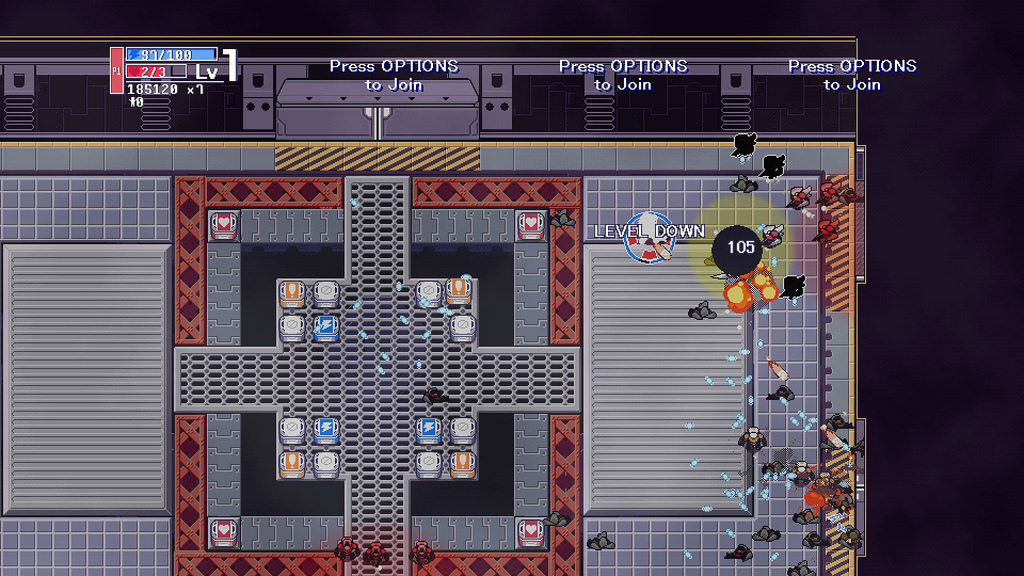 All of this makes for a fun and frenetic arcade shooter that, apparently, only gets better when you throw in a couple of friends for some shared screen robot blasting joy (which would be much more accessible if the game allowed for online multiplayer – a huge oversight to my mind). But, even with a slew of unlockables and a cool ‘Core’ mechanic that lets you customise your game somewhat, Circuit Breakers may begin to get old swiftly.

It’s something that’s becoming a much more prevalent argument as the average age of gamers continues to climb. Due to things like work and families, more gamers now have less time to play the games that they enjoy so our time is now much, much more valuable to us than any cash we might drop on a game.

As a result, some of us are much more likely to buy into a game that gives us something in return for the time we put in: either a long and valuable gameplay experience, a brilliant story that we can get emotionally involved in or, preferably, one of those rare mixtures of the two.

What some of us (myself included) are not looking for are time-wasting games. And as great an arcade shooter as Circuit Breakers is, it is a bit of a time-waster. There’s no storyline progression, you don’t grow or build your characters and there aren’t any real long-term rewards for playing the game.

I don’t want to end on a downer, though because, if anything else, Circuit Breakers is incredibly good fun. It might not entirely scratch my gaming itch but if you’ve got a love of arcade action or you’re after a pick-up-and-play game to dive into for a few minutes at a time, Circuit Breakers is absolutely the time-waster for you.

Circuit Breakers is available on PC, PS4 and Xbox One. We reviewed the PS4 version.