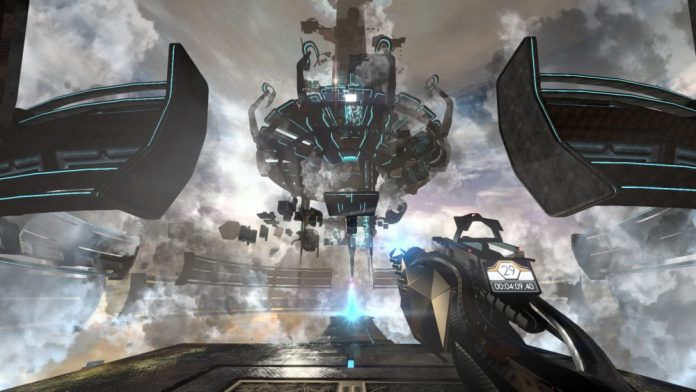 Logically, I know I’m sitting on my sofa, controller gripped firmly in my hands.

But in my mind’s eye I’m teetering on a block that’s suspended in the air by unknown means, a chunk of floating concrete that’s barely wide enough to support my upright form. I’m all too aware that the slightest mis-step will send me plummeting to the churning, roiling abyss beneath me.

This is DeadCore, and I’m loving every vertigo-inducing minute of it.

DeadCore is, in essence, what you’d get if took Portal’s test chambers, stacked them on top of each other and removed the walls. This first-person action-puzzle platformer charges you with ascending some vast, mysterious construction. In an effort to further unsettle you, the game doesn’t begin at ground level; rather you regain consciousness in a dimly lit antechamber. The moment you step outside you can see the yawning, whirling chasm beneath you, a disconcerting effect that makes your  task seems even more  daunting. But fear not; DeadCore drip-feeds you your abilities in such a way that, two hours in, you feel like you can fly. Nearly.

Your primary means of locomotion is the tried and tested jump and double jump, though the way your legs emit a mechanical sound is a little disconcerting. This is just one of the little touches that DeadCore employs to lend proceedings a suitably unearthly feel. Get the hang of leaping around platforms and you’re introduced to the Switch Gun which allows you activate buttons remotely, essential for turning off the stationary fans that, if left on, will blow you off course and into the abyss.

I won’t spoil future challenges for you, but DeadCore‘s crowning accomplishment is how well designed its levels are. You’ll rarely find yourself stuck for more than a few minutes and you’ll be slapping yourself on the back for figuring out just how to proceed. At one point I was teetering on the brink of frustration, unable to proceed past a puzzle, when I realised that I had to “boost” exactly when I left the lift; a moment later I was surfing on a wave of euphoria as I headed onwards and upwards. 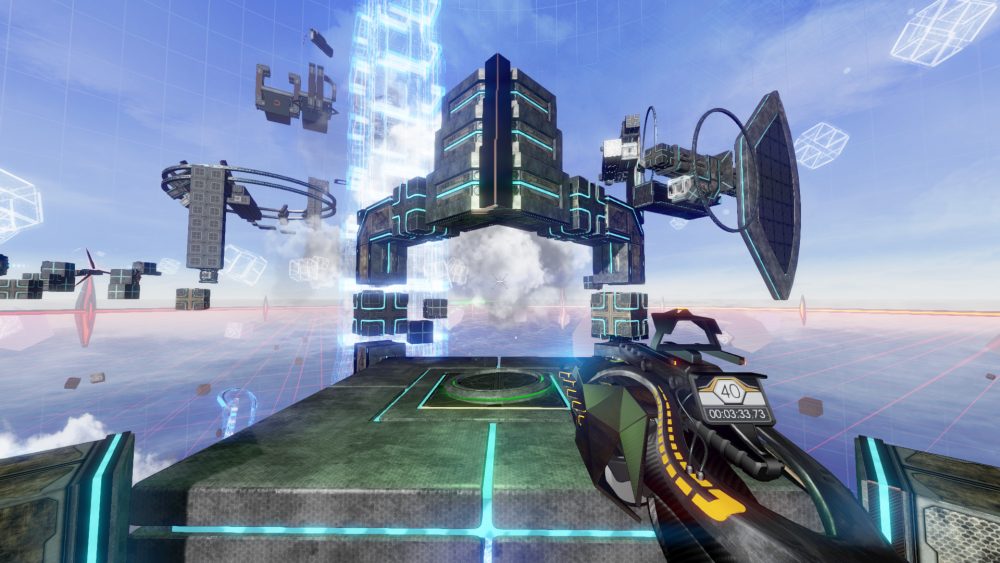 DeadCore was released on Steam in 2014 and its PC roots are occasionally evident in the console version. Most of the game’s obstacles can be negotiated perfectly well using the joypad but there are a few that are so tricky it’s clear they were designed with mouse controls in mind. Similarly, the Tron-esque graphics, while not groundbreaking, are suitably distinctive and dreamlike but every so often the sky looks markedly less convincing. A little tweak here and there would have been welcome.

Nevertheless, once you’ve mastered DeadCore‘s mechanics the game becomes a beautifully fluid experience. The game has been developed with speed runners in mind and while I don’t count myself amongst their ranks, I still found myself gleefully blasting through the levels I’d already conquered trying to beat my time.  The addition of a respawn button, which teleports to your last checkpoint is a real boon which ensures that, even if you have flubbed a puzzle or stumbled off a platform, the game’s pace rarely flounders.

The same can’t be said of DeadCore’s narrative which is patchy at best, mere snatches of a storyline cropping up in its collectible, and optional, logs.  The game never adequately explains why you’ve been allocated your near-Sisyphean task, nor does the ending shed any light on the matter. Which is a real shame, since DeadCore’s strange, semi-alien setting offers ample opportunity to explore any number of searching themes.

Yet DeadCore is such a grand journey that it’s easy to forgive the game its narrative shortcomings. The puzzles it delivers are just challenging enough to ensure the game never outstays its welcome and success is indeed its own reward. The game’s speed running potential helps it stand up to repeated plays and I’ll definitely be dipping back in not only to beat my times but to re-experience its curious landscape.  DeadCore doesn’t quite knock Portal off its podium but it offers a wild, well-paced, otherworldly ride that is well worth taking.

Just try not to look down; your inner ear will never forgive you.

DeadCore is available on PC, PS4 and Xbox One. We reviewed the Xbox One version.