The Escapists 2 is not a game about issues.

Perhaps wisely, this escape-em-up does not address the rights and wrongs of the penal system; instead, it adopts an air of levity. So much so that you can almost hear Yakety Sax playing as you dash around pursued by a group of exasperated guards. Nor does it matter how many times you knock someone out so you can purloin their toothpaste, they still wake up in the infirmary with nothing more than a mild headache.

Unexplained cranial fortitude aside, The Escapists 2 is a fun, if flawed, foray into the world of prison escapes. Short on plot but strong on shenanigans, this retro-styled action strategy game casts you as a convict (you can tweak your character’s appearance) who has been incarcerated for an unspecified crime or crimes. Maybe you parked illegally or perhaps you went on a homicidal rampage with a potato peeler — you can use your imagination. 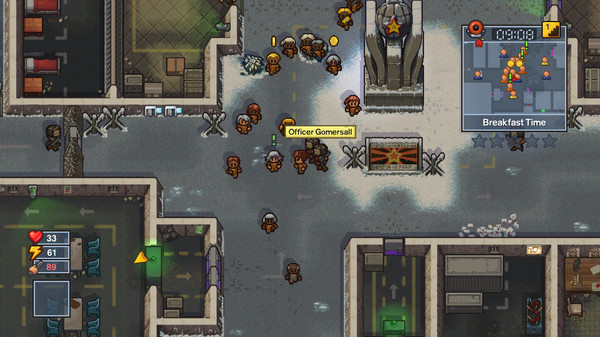 Either way, you’re tasked with escaping from a range of increasingly elaborate prisons, from the small tutorial penitentiary to water-based prisons, right through to the final space-based penal colony. It’s a tad irritating that of the twelve prisons, only four are immediately accessible, the others having to be unlocked. It brings to mind comedian Dara Ó Briain’s monologue about games being the only medium to deny you content you’ve already purchased. Want to play Prison Break on the moon? Tough. You’ve got to earn it.

There are a couple of levels which mix things up, tasking you with fleeing a mobile prison before it reaches its destination. For the most part, though, you can take as long as you like to plan your daring escape — just as long as you stick the prison’s daily routine. Miss any of the allotted check-ins such as exercise time or dinner and you’ll raise the prison’s alert level. Repeatedly miss them and you’ll end up in solitary for a few minutes. You can evade the guards but they’ll eventually bring in dogs which will track you down with ease.

Naturally, your fellow inmates are also beholden to this routine, but unlike The Great Escape or similar movies, where escape is often a team effort, The Escapists 2‘s single-player mode has you working without the aid of other NPCs. So while prisoners will sometimes pay you to cause a distraction (among other errands), the option to have them distract guards for you is absent. There’s no game over if you’re caught, but any items that are considered contraband, such as the baseball bat you crafted from two pieces of wood, will be confiscated and random cell searches further serve to keep you on your toes. 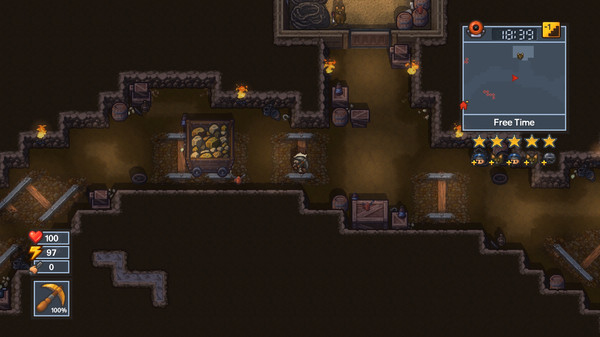 Yet despite the fact that The Escapists 2 subjects you to a very specific daily timetable, boredom rarely sets in, and that’s the real beauty of the game. Even when you’re sitting in your virtual cell, your mind is constantly mulling over plans of action. Should you risk a daytime escape, knowing that many of the normally locked doors will be open during daylight hours? Is it worth gathering or trading the resources necessary to craft a pillow dummy? Or should you throw caution to the wind and just hope none of the guards peer in your cell while you’re crawling through the vents? Just pondering the possibilities will fill you with childish glee.

The only time I found myself clock watching was when I was waiting night time to roll around so I could make my final break for freedom. After several failed attempts, I was pinning everything on this. I held my breath as I clipped through the wire fence, praying that no-one would notice my absence. Mercifully, the alarm failed to sound and I was scrambling through the hole in the wire, overjoyed that my perseverance had paid off. Finally beating a prison is a major rush and will leave you champing at the bit to tackle the next one.

However, there are times that The Escapists 2 can feel restrictive, and I’m not referring to your character’s virtual confinement. The game boasts that it’s up to you how you choose to escape but sometimes, if you try to “think outside the box”, it waggles its finger at you and insists that you play by its rules. On one occasion, I decided to make a break by it by donning civilian clothes and following a camera crew out of a normally locked door. Only the game’s designers apparently hadn’t considered that players might try to tailgate NPCs and so I smacked into an invisible barrier that stretched across the open doorway. 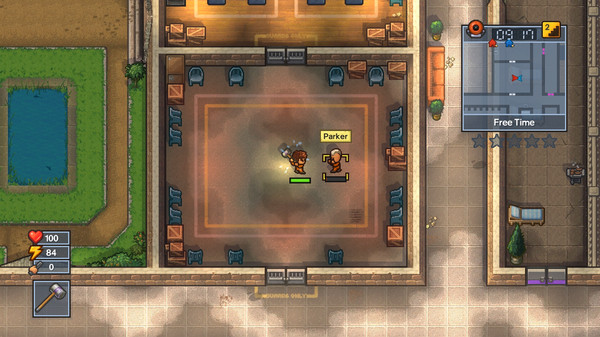 Another time, I decided to flood my cell’s toilet so that when a plumber came in to fix it I could knock him out and take his keys. Everything went to plan, right up until the moment when my soap-in-a-sock passed right through the plumber’s apparently spectral head and, toiled unclogged, he wandered off oblivious. As it transpires, The Escapists 2 will only let you waylay prisoners and guards, so I decided I’d knock out a guard instead. I was preparing myself to pilfer his possessions when a nurse rushed in and dragged him off the infirmary. I spent a good minute just gawping at my screen in disbelief because the nurses in The Escapists 2, who apparently hail from Silent Hill, are psychically linked to every NPC and, despite lack of witnesses, will haul them away.

It’s moments like these, not the game’s enforced daily routine, that prove an annoyance. Thankfully they’re not too prevalent and you do figure out how to operate within the game’s framework. For the most part, the game keeps you engaged rather than enraged and, barring these aforementioned occurrences, failure is rarely frustrating. And while I’ve only had a brief dalliance with the game’s split-screen four player co-op mode, it felt as if I was participating in my own prison-busting blockbuster. Moldy Toof and Team 17, creators of The Escapists 2, deserve a shiv-free pat on the back for including split-screen when so many games merely offer an online mode (though that mode is also present in the game).

Every new prison is a wonder to behold and a challenge to be conquered, the thrill and anticipation of success escalating as you tackle progressively tougher and more varied penitentiaries. It isn’t perfect, and frustration will rear its ugly head from time to time, but for all its quirks, The Escapists 2’s blend of excitement and tension will keep you hooked. Lock yourself away with The Escapists 2 and you won’t regret it.

The Escapists is available on PC, PS4 and Xbox One. We reviewed the PS4 version.