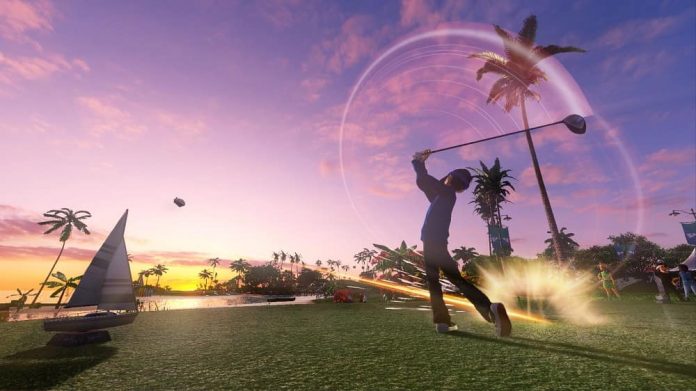 Sports games are often just too serious for their own good.

I mean, sports are meant to be fun, but if you boot up a game like The Golf Club 2 you’re only likely to enjoy yourself if you’re aware of the sport’s minutiae. That’s why I’m thankful for games like Everybody’s Golf. Games that take a sport, make it accessible for all and throw in a great deal of humour while doing it.

If you’ve ever played an Everybody’s Golf game before you’ll have an idea of what to expect, but for its first foray onto the PlayStation 4 things have been toyed with a little. After creating your own custom golfer using the game’s comprehensive character creation system, you’re introduced to Everybody’s Golf‘s Home hub in which you’re free to run around and decide what you want to do next. Initially, you’ll probably want to get stuck into an easy tournament to get to grips with the controls, though not all of Everybody’s Golf‘s features are available from the outset. 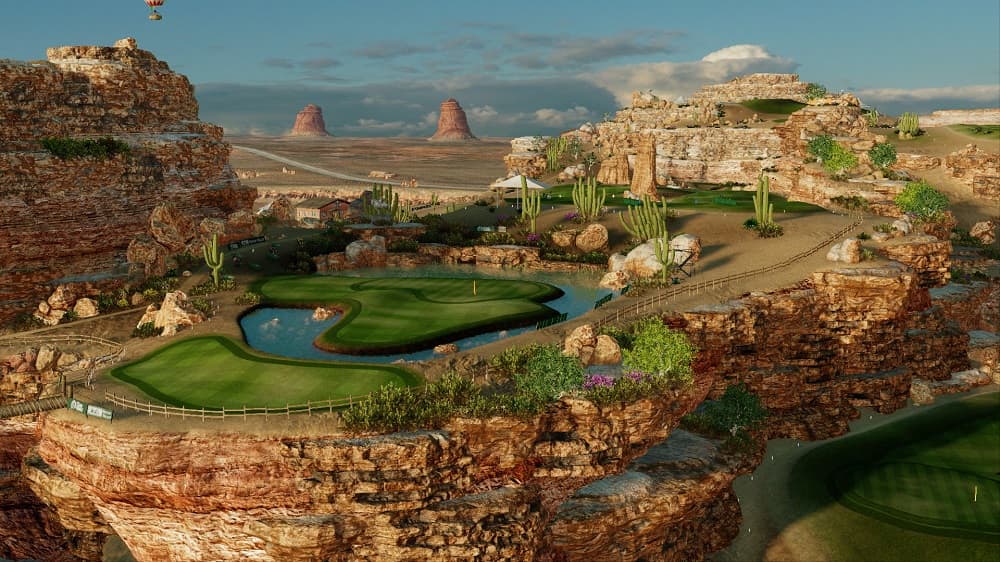 Ploughing through Everybody’s Golf‘s tournaments nets you coins and experience, and to rank up and unlock more difficult tournaments you need to defeat a number of one-on-one versus events. It’s a simple system that works rather well, and those who feel up to the challenge can enable a harder ‘Serious Mode’ to speed up their progress. As you move up the ranks you also unlock the ability to modify your shots somewhat, giving you more control of the flight of your ball and making the game more technical.

The Home hub becomes more lively as you progress too, with more NPCs populating it for you to talk to and a handful of extra activities. Everybody’s Golf may be a golf game, but if you want to partake in quick quizzes or speed around in a golfing cart it has you covered. It’s also worth visiting the shop now and again to spend some of your coins. Aside from there being a wealth of visual customisation items to make your character more unique, you can buy new clubs and balls that tweak your golfing abilities too. 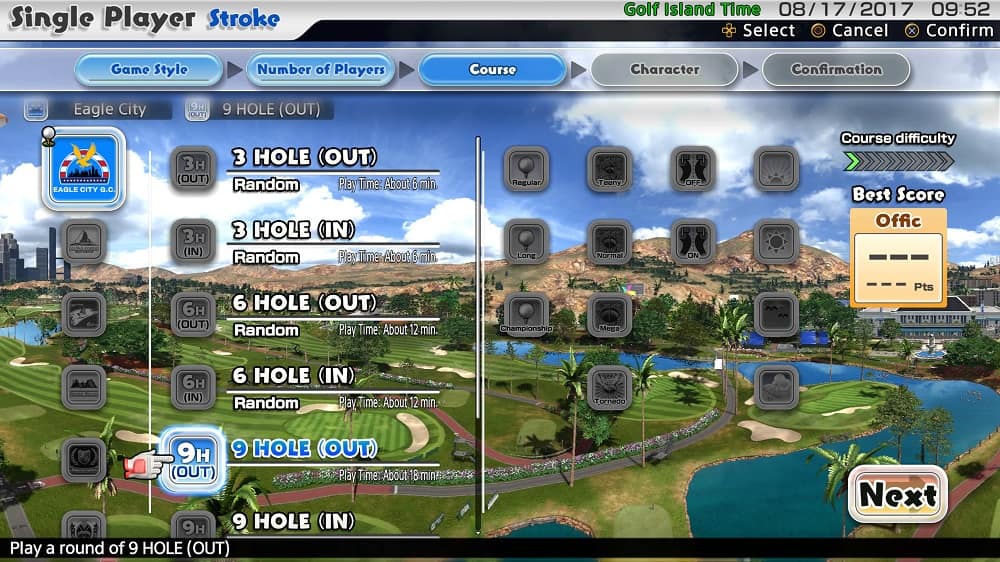 While a new club or ball may enable you to hit the ball a bit more accurately or a bit harder, for real performance gains you just need to play well. In Everybody’s Golf, every shot you make is a chance to improve yourself. Hit a shot at 95% or more power, for instance, and you’ll level up your power stat, allowing you to hit the ball further. Land a ball close to the hole and you’ll increase your control. The stats are unique for each club, however, so if you rarely use a specific club it’ll be left underdeveloped for when you really need to use it. In any case, it’s a nice RPG-like system that makes each game of golf feel worthwhile. And it also allows you to develop a character that plays to your strengths.

While in single player you can enjoy entering tournaments, competing in versus matches and engaging in single stroke play, many will find Everybody’s Golf‘s online modes more alluring. Strangely accessible from the game’s single player Home hub rather than the multiplayer menu on the title screen, online open course mode has you running around the course of your choice, interacting with other social golfers while attempting holes in any order you see fit. It’s a great way to spend some time, and if you happen to choose a course offering a bonus, then completing all the holes will net you some goodies the next day.

In contrast to online open course mode, turf war mode is much more frenzied and competitive. Placed onto either team red or team blue, it’s a race against time to see which team can score the most holes. It’s fast, it’s frenzied but most importantly it’s fun, meaning it’s possible to easily get sucked in and spend considerable time racing through holes for the win. 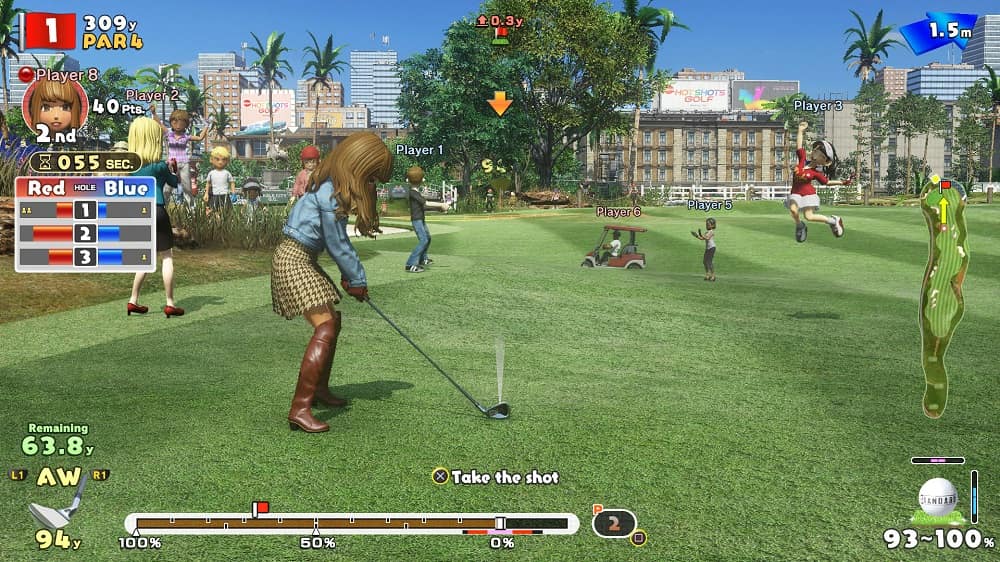 It’s a good job that Everybody’s Golf is so much fun to play, as in terms of presentation it’s decidedly sub-par. Graphics feel distinctly last-gen at times, with some character models even looking like they’re from the PS2 era. On top of that, the HUD is a cluttered mish-mash that is quite frankly ugly. Still, performance is solid, and if you’re playing on a PS4 Pro you have the option to play in 4K or at 60fps. There’s also a HDR option for those with compatible TVs. Not that any of these options are going to make a dramatic difference to your experience, mind.

Everybody’s Golf‘s lack of visual splendour shouldn’t put you off playing what is the most accessible and enjoyable golf game there is on the market though. Creating and developing your own comical golf avatar is wonderfully addictive, and while there are only five courses available, the vast array of gameplay options and features means it’s hard to ever tire of sinking balls until the early hours of the morning, whether online or off. Everybody’s Golf on PlayStation 4 is the best it’s ever been, and that’s all you really need to know.

Everybody’s Golf is available on PlayStation 4.