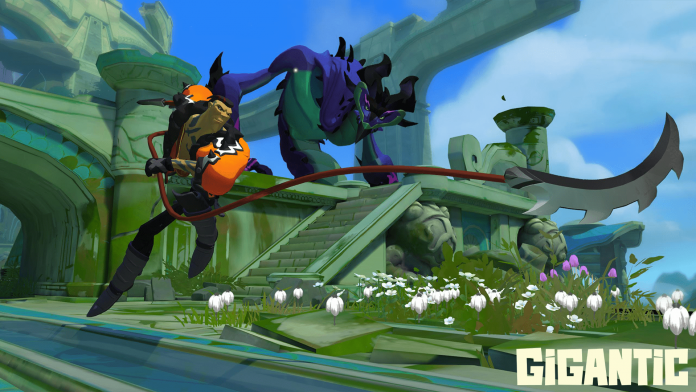 Look ma! It’s another hero shooter! Thankfully, Gigantic is more Overwatch than Battleborn. Whether it’ll have the same longevity, however, is the real question.

It is pleasant to see a game like Gigantic make it to release; a troubled time in development for Motiga meant that Gigantic went through the wars to get to where it is now. But thanks to publisher Perfect World Entertainment, Motiga’s 5v5 third-person hero shooter is now available for all. And I’m happy to say that it’s actually not half bad.

In Gigantic you battle alongside a Guardian against an enemy Guardian. You and the other nine players are heroes from a collection of 19. Primarily a free-to-play game, most players only have a selection of five rotated heroes to choose from. For the purpose of this review my code included The Ultimate Pack, which unlocks all the heroes.

Is it worth unlocking all 19? Probably. The issue with a rotational hero system is that hero shooters are about finding your character, and that can be rather difficult if it’s not within the five currently available. Players might play the five available, not click with any of them, and never come back to the game. Unlocking heroes individually ranges from £4-£8, so to get them all for a flat £23.99 seems relatively worth it. Plus, any future heroes will also automatically unlock.

It’s pleasantly surprising how many of Gigantic’s 19 heroes I actually enjoyed playing as. Some have more personality than others – Pakko and Uncle Sven make me giggle during matches. Other heroes I couldn’t tell what their personality is like – they’re either pretty quiet or have generic voice lines. There are about 11 heroes that I like to play as – a mix of high damage, mobility, and utility among them. HK-206 is my usual go to; there’s no two ways about it, he’s basically Bastion with rockets. There are some heroes in Gigantic which possess similarities to Overwatch characters, but it’s a way off the level of similarity that Paladins seems to have accomplished.

The biggest criticism I have of Gigantic is the amount of maps – there are only three. Among them, Sanctum Falls is my favourite, while Siren’s Stand I’m not too keen on. When there are only three maps in rotation, you inevitably tend to get the same one a few times in a row. Gigantic is great when you’re getting a good map rotation, but getting Siren’s Stand four times in a row gets rather annoying, especially if you have hero preferences for each map. Hopefully Motiga are looking to add more maps further down the line, because it’s certainly an aspect of Gigantic that needs fleshing out.

Gigantic has a basic three lane system; two of those lanes have points teams can build creatures that generate power. Your Guardian ‘rampages’ upon reaching 100 power, attacking the opposing Guardian. By helping deal damage to the enemy Guardian during the following wounded phase you knock off three hearts from it to win the match. To generate power you control points, kill players, or kill your opponents’ built creatures. There are two points that start uncontested that either team can control, the rest belong to their respective sides, but you can still kill built creatures there for extra power. These creatures can either heal, reveal enemies, or build gates that block off one route from the enemy – they also defend themselves when under attack.

All these systems are very well taught during Gigantics‘ initial tutorial. Within one or two matches afterward I had the game pretty much down – when to attack, when not, or when to use an opportunity to kill an enemy creature. Your opponents can make a successful rampage difficult, as they will defend their Guardian throughout their wounded period; if you don’t deal enough damage to the Guardian, then they won’t take a heart of damage. Good defense can lead to longer matches, and a walkover from one team does end the game quite quickly. The best matches are when both teams are trading rampages and defending well, ergo it’s taking two rampages to take out each heart. You can turn around a two heart deficit too, which is really satisfying when you pull it off.

For players coming at Gigantic as a completely free-to-play experience, I can see exactly why they’d not play for very long. It doesn’t take too long to make enough in-game currency to unlock a hero, but again, you never know which one is yours until you find it, and that may warrant a lot of play time till those players do. The gameplay itself though is expectantly fast paced, but with an auto-picking skill points system and good descriptions on hero abilities you can still feel effective in your first game. The time to kill is long enough that a team wipe or double/triple kills feel rewarding, especially as with dead opponents you can gain more power and control of the map during their respawn time. For a genre that is continuing to grow thanks to the monumental success of Overwatch, Gigantic is a bigger splash than I expected.

Gigantic is available on PC and Xbox One. We reviewed the PC version.