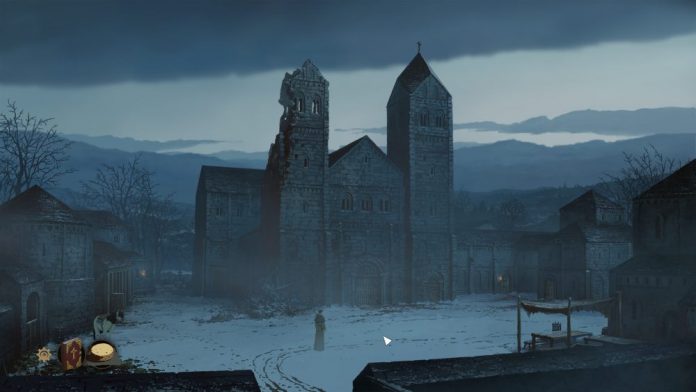 I’d never heard of Ken Follett’s epic novel, The Pillars of the Earth, until a review code of its video game adaptation landed in my inbox.

It’s an epic, 1000-odd page long book about church and state in 12th century England. It’s the sort of book that I’d like to be able to lose myself in, but would undoubtedly be put off by the sheer length and the complexities of the middle age lore.

After playing the first part of Daedalic Entertainment’s gorgeous adaptation of the book, though, I kind of wish I did have the resolve to read it. Ken Follett’s The Pillars of the Earth is a remarkable story filled with fascinating characters, colourful language, and a plot that forever keeps you guessing. 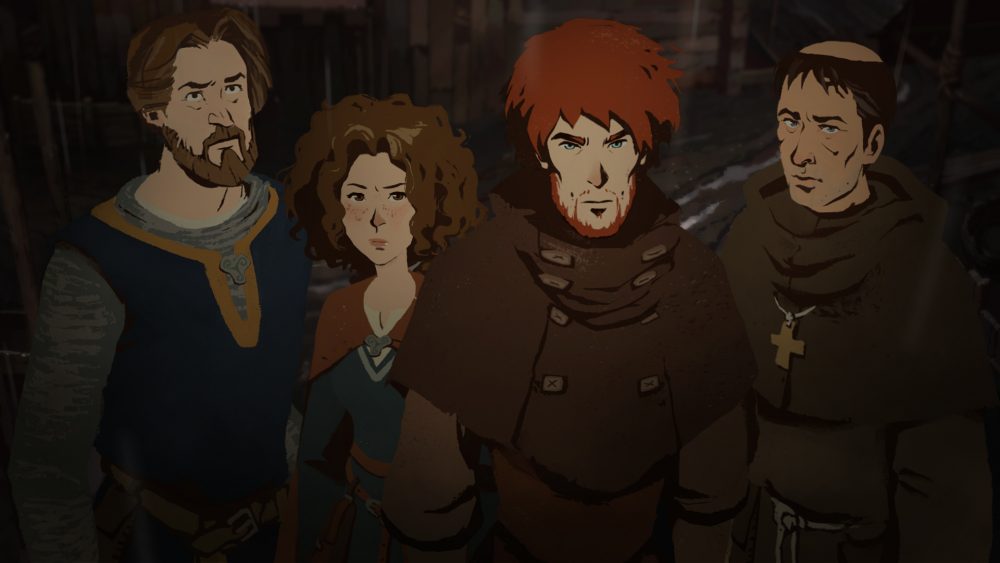 The game has been split into three ‘books’, with only the first currently available. It’s not episodic in the sense of a Telltale game though; the first part has a good six or seven hours of gameplay in it, split over seven chapters itself. Book one, From the Ashes, sets up a story that sees us follow several main characters – a monk named Philip; Tom Builder, a homeless widower and his children; and Jack, a young boy who’s grown up in the forest with his mother.

Every character has a unique perspective to give, but throughout the game their storylines intersect and intertwine to form a greater, overarching narrative. While the subject matter – based around a crumbling monastery in medieval England – can feel quite dry at times, the well-written and instantly likeable cast bring it to life with a great amount of colour. The game’s fantastic artwork helps there too.

It’s Ken Follett’s The Pillars of the Earth‘s visuals that hooked me in to begin with. Brilliantly crafted hand-drawn 2D animations give the game a personality all of its own. Even when the subject matter is, say, a dull-looking crumbling stable, juxtaposed against a grey English winter afternoon, the masterful artwork on show still manages to bring a level of beauty that’s not often seen in games of this ilk. It really is a treat. 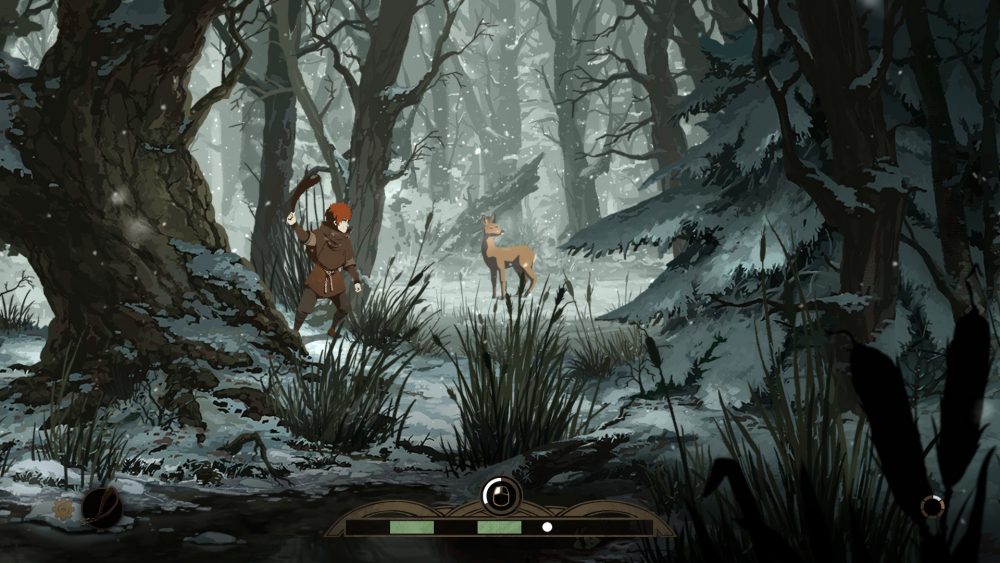 While the artwork may have initially piqued my interest, though, I stayed for the story and gameplay. At times, The Pillars of the Earth feels very much like a visual novel; you’re merely going through the motions as a segment of Follett’s epic story plays out to you on screen. At other times though, it’s pure adventure. There’s a very strong point and click influence here, occasionally reminding me of Revolution’s masterpiece Broken Sword. There are a few environmental puzzles – working out what or who you need to interact with to progress through the story, and a few objects to add to your inventory to use later – but there’s nothing too taxing. Occasionally I found myself wandering around an area a little longer than the story intended me to while I tried to figure out what I needed to do, but I was never stumped for too long.

The entirety of the dialogue in Ken Follett’s The Pillars of the Earth is voiced, which is a massive credit to the game. For a game that carries a myriad of dialogue choices, it’s somewhat unusual – but very welcome, especially considering each character is perfectly acted. The emotions, intonations and delivery are spot on across the board, making each character very much believable and relatable. Even the villains, loathe as they may be, are delivered well, creating real, palpable tension as the plot twists and turns. 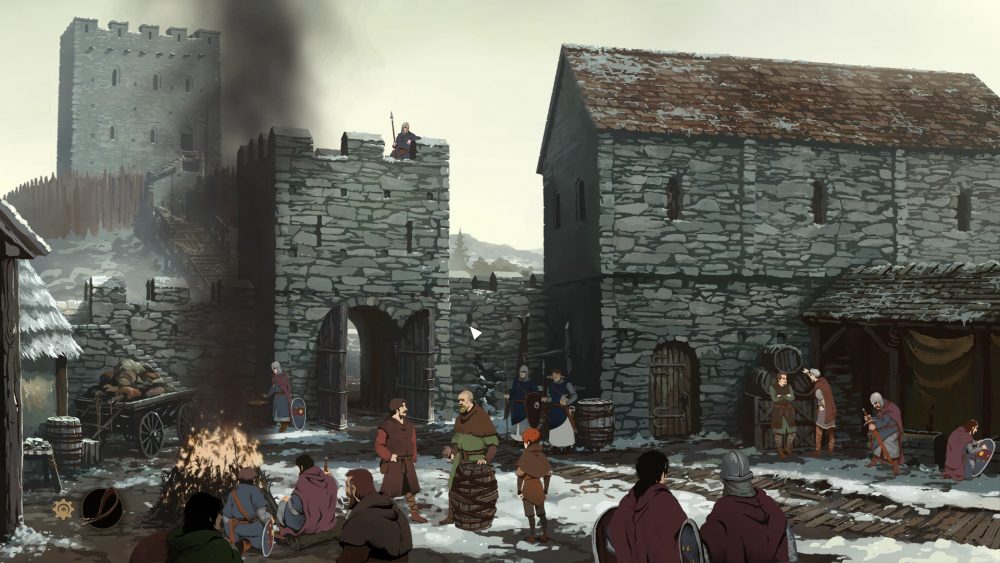 Despite only being a third of the full story, the first book of The Pillars of the Earth packs in a lot of narrative and action, leaving me desperate to find out what’s coming next. To give away more of the plot would be to spoil the joy of seeing it unfold for yourself, and it’s really worth doing – even if you don’t think you’re particularly interested in historical drama.

Seeing a book come to life in such an extraordinary way is absolutely magical, and it makes me all the more disappointed that it’s a text I’m not familiar with. Had I known the novel beforehand, I’d imagine Ken Follett’s The Pillars of the Earth would be even more captivating. TV adaptations are one thing, but a book-to-game adaptation is very rare – and hopefully this can light a path for others to follow in its footsteps.

I can’t recommend The Pillars of the Earth highly enough. Beautiful artwork combined with a deep and rich story make for a compelling experience, and I’m eager for book two of the game to release so I can get stuck back in.

Ken Follett’s The Pillars of the Earth is available on PC, PlayStation 4 and Xbox One. We reviewed the Xbox One version.