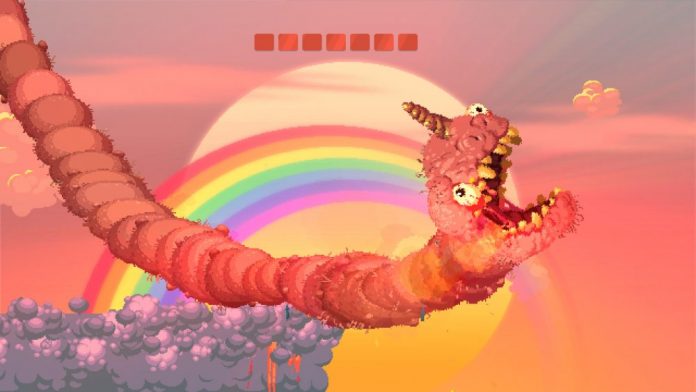 Sequels can be tough.

When you create something that people really love, it can often be really tough to live up that hype should you decide to follow it with a sequel. When I first played Nidhogg, the fast-paced fencing game from developer Messhof a few years ago, I was completely sucked into it. I enjoyed nothing more than inviting my friends to play with me so I could kick their butts at the ingenious two-button combat game. So, of course, when Nidhogg 2 was announced I couldn’t wait to get my hands on it.

Unfortunately, even though Nidhogg 2 does have a lot of the same things I loved about the first, too many of the changes and new features had me feeling overwhelmed; as though I should just go back to the original rather than continue on.

Nidhogg 2 is a side scrolling tug-of-war type combat game with a very simple goal: try to get to the complete opposite side of each level while fighting another player trying to do the same. You do this by having multiple short fencing matches. Whoever wins the most matches slowly progresses to the end where a great wurm is waiting to devour them. Sounds like a great prize right? 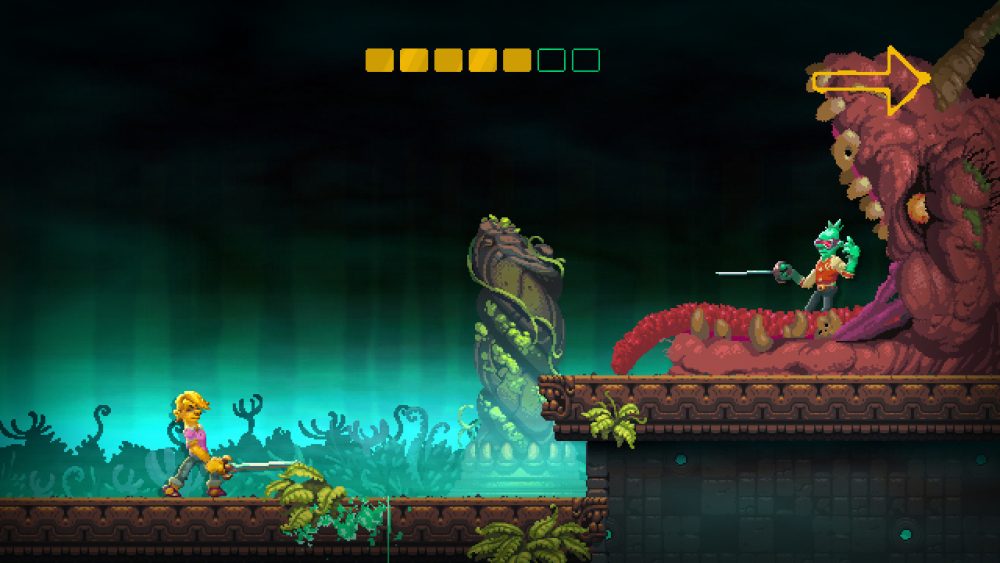 The gameplay itself, at least in the original, was crisp and clean. Each sword slash had to be well-thought out or you could get beheaded by your enemy in a second. Nidhogg 2 feels less uniform in that way; no matter how quickly you try to block, it seems that your enemy is still able to hack you to pieces, and if they don’t you’ll probably fall into a pit because you didn’t hold the jump button down long enough. You have to pay incredibly close attention to how you’re moving and what your weapon is doing if you hope to get out of the battle alive.

One of the biggest changes in Nidhogg 2, aside from the obvious graphical overhaul, is that there are many more weapons you can pick up along the way to defeat your enemies. No longer are your attacks just tied to sword-wielding. While the new arsenal is an interesting choice, Nidhogg was unique because of the fact it was a fencing game. Now, it’s more of a general hack-and-slash, especially with the addition of bows and huge broadswords.

With all this being said though, underneath all the nonsense, Nidhogg 2‘s core combat feels familiar, and providing you’ve got the right opponent, it still makes for an enjoyable experience. Nidhogg 2 is just as fast paced and overwhelming as its predecessor, sometimes making you wonder if the fight had really happened at all.

Nidhogg 2 has three playable modes: arcade, local, and online. I spent a little time in all three, but it’s no surprise that playing against a local opponent is by far the best. Arcade is tough as nails. It took me days beat the first level, but once I finally got to grips with it, it’s a fun way of getting to play through every level and a good opportunity to practice with the game’s new weaponry before letting loose with them in local or online multiplayer. 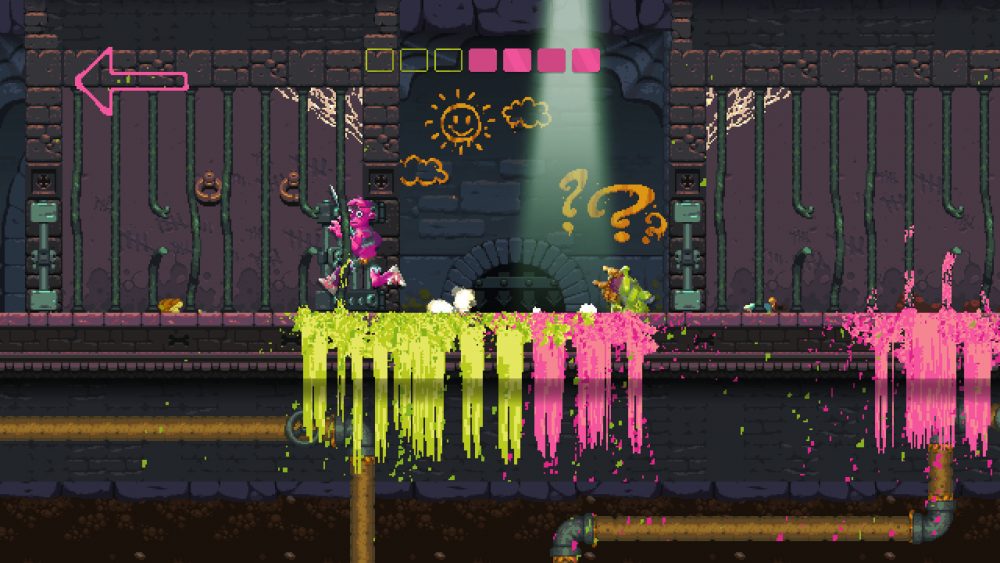 When you play local, one player plays with a controller and the other uses the keyboard. Just like the original, Nidhogg 2 has a way of making players — including me, of course — incredibly competitive. In online mode, be prepared to go up against players at varying difficulty levels. Some players will wreck you within seconds, but then again, I can’t say it isn’t satisfying defeating someone who has clearly only put a few minutes into the game. Crushing noobs is always a little bit satisfying right?

But let’s talk about those graphics. Nidhogg was purposefully very simple, with big, blocky pixels and a retro throwback style. Messhof has gone for a much more detailed style with Nidhogg 2, and if you ask me, that’s where the game’s real downfall lies. The graphics are more detailed, yes, but in a way that doesn’t really appeal to the eyes. The art style reminded me of Bit Trip Runner, where things are silly and weird but all of the extra poppycock is more distracting than anything else. It was Nidhogg‘s simplicity that worked so well; players got to focus solely on swordplay. Now there’s much more to focus on, and it takes away from the enjoyment of the game’s core concept.

In the end, I was pretty disappointed with Nidhogg 2. After a few hours of playing I don’t see myself going back to it any time soon. The weapon changes and graphic changes were enough to turn me off. Although the game can be fun to play for a few minutes at a time, all of the extra additions were just a little too much. I’ll stick to playing the original, I think.

Nidhogg 2 is available on PC.