It’s been a real week for crossovers.

Firstly, it’s been revealed that Final Fantasy XV is to receive a compulsory piece of downloadable content which will make every character appear as a Knight Rider era David Hasslehoff. Then Ubisoft announced that, due to licensing issues, their forthcoming Switch release is to become Alex Kidd + Rabbids Kingdom Battle and will, instead of Mario, feature Sega’s monkey-faced eighties mascot.

But that’s not all that’s been happening in the world of games. So to bring you up to date, and definitely not to cram a bunch of barefaced lies into your ear-holes, we present this week’s Totally True Gaming News Round Up.

Xbox’s Head of Arguing, Baron Greenback, this week confirmed that Microsoft has taken their cross-platform negotiations to the next level.

“We’re pretty adamant that cross-platform play is the way to go, so that Xbox One gamers could play multiplayer games against PlayStation 4 owners and vice-versa. We’d been standing outside Sony HQ for three weeks now and while we started off politely enough, by week three we were screaming and shouting. Still nothing. So clearly, the only option we had was to crank things up a notch,” explained Greenback.

The company commissioned a local pottery company to manufacture a large quantity of “X Bricks”, each of which bears the company logo as well as an etched note. The notes range in tone from the polite “Would be happy to open discussions regards cross-platform play,” through to the less pleasant “Hey! Hey! What do you say? How many times were you hacked today?”

Greenback and his colleagues have, for the last three days, been pitching these custom bricks through Sony’s windows. No-one has yet been seriously hurt, though one Xbox executive accidentally gave himself a Chinese burn. It’s not clear what action Microsoft will take if Sony fail to capitulate but one eyewitness reported seeing an original Xbox being loaded into a makeshift catapult.

Developer Digital this week released a trailer for Ruiner, a game they’ll be publishing this September. Developed by Reikon Games, the game casts you as a disgruntled ex-HBO employee who makes it his mission to ruin people’s enjoyment of the network’s popular fantasy show, Game of Thrones.

The stealth strategy game has you sneaking into people’s houses just as the show is about to start, before loudly informing them that Sansa Stark is in fact three badgers wearing an elaborately constructed costume. Or that Jon Snow is actually the illegitimate son of the Channel 4 newsreader of the same name. You then have to flee before the offended viewer can clobber you with a household object.

The special edition of the game will come with a show-accurate model of Robot Legs Ned Stark.

This week has seen the leak of Nintendo’s secret business plan, which was found beneath a pile of discarded Virtual Boys. The business plan explains not only how Nintendo has managed to make so much money, but also why the company’s consoles are so hard to come by.

It’s long been rumoured that Nintendo has been holding back vast quantities of the NES Classic and the Nintendo Switch, but this leaked document reveals this is not the case. Instead, the company retained a mere 10 NES Classics and 20 Nintendo Switches, listing them on eBay at vastly inflated prices, due to their intentional rarity. Nintendo then purchased these consoles back off themselves, typically using the eBay account “DefinitelyNotReggieFilsAime”, and re-listed them, repeating the process until they were 19.83 billon yen in profit.

Backers of Star Citizen, the oft-delayed massively multiplayer space-sim reacted positively to the announcement that the game will feature accurate face recognition technology. As demonstrated at this year’s Gamescom, players will be able to use a webcam to have their expressions mapped onto their in-game characters, in real time. While there’s been no official announcement, it’s hoped that Chris Roberts, the creator of Star Citizen, will make the face recognition demo program publicly available.

“Man, I hope that he lets us play with the demo. I’m so stoked for this. I’m looking forward to loading it up, plugging in my webcam and watching my avatar ask Chris Roberts where the hell my game is,” explained disgruntled backer Will Simons.

This sentiment was echoed by a number of would-be Star Citizen players such as Maun Shurray who, posting on the unofficial Star Citizen forums, stated, “Best of all, you can be anyone you like. They’ve even got Liam ‘Game of Thrones’ Cunningham in there. Imaging seeing your voice come out of Davos Seaworth’s mouth as you complain about the utter shambles that is Star Citizen‘s development cycle.”

Star Citizen is expected to be released mere days before our Sun reaches the end of its natural life.

Next week’s predictions: Secret of Manamana to be bundled with Muppet-themed Nintendo Switch, all copies of Mass Effect: Andromeda to pop out of existence as if they had never been and Giant Haystacks to be a pre-order bonus for WWE 2k18. 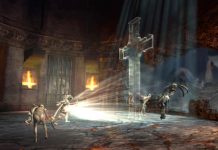 8 Popular Video Games Based on Books