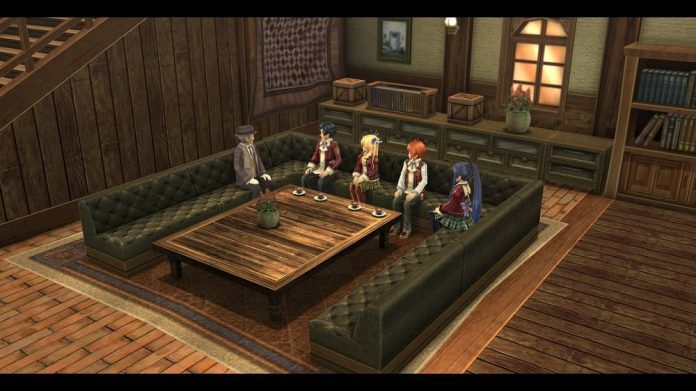 It’s hard for me to pin down exactly why that is, but it’s something to do with how painfully innocent they are. I’m too resigned to the horror of the world to accept the naive worldview that anime stories sometimes rely upon. The cutesy, bright and cheerful characterisations just burn holes into my retinas with how sugary and twee they are, and from a narrative perspective JRPGs have a tendency to break the players’ immersion by over explaining every single plot strand to the point of insulting your intelligence. I like to call it death by exposition. That being said, it’s not that they’re bad games or anything, it just boils down to what your introduction to RPGs were.

My RPG adolescence was filled with games like Fallout and Deus Ex. So when it comes to JRPG games… I just come from a different world altogether. With that in mind then – yes, I was worried about playing Legend of Heroes: Trails of Cold Steel. In the opening prologue the dialogue seemed to drag on forever, the gameplay was streamlined and on rails, and the combat was insultingly simple. It seemed like it was going to represent the things I loathe about JRPGs. But after spending quite a lot of time with the game I actually think it just about manages to get away with it. But not by much.

Trails of Cold Steel is a charming and lighthearted story of eight gifted recruits at the Thors Military Academy in the mighty Erebonian Empire. They’re thrust into a new, experimental class of talented students called class VII, where it quickly becomes clear they are anything but typical students. Not only do they need to focus on school life, their grades and their military training, they also have to navigate their own awkward teenage emotions and attempt to traverse the minefields of each other’s social backgrounds, too.

You see, the world of Trails of Cold Steel is made up of Industrial Revolution era class politics, where the lower classes and upper classes are segregated and split apart based on economic background and neither side particularly likes the other as a result. This exists within a world of Imperial super powers that enjoy a tense but nonetheless stable sense of peace – sound familiar? 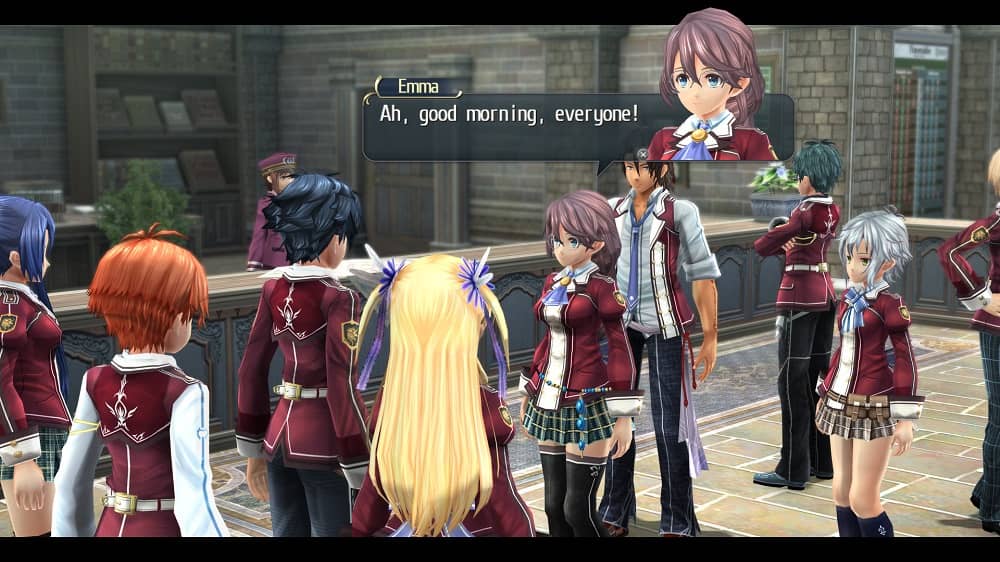 Even the visual design of the games many citizens, buildings and locales hark back to early 20th century European Imperial empires. That makes it sound like Trails of Cold Steel is going to be a dismal trawl through politically charged rhetoric – the kind of dull, ill-informed pseudo-politics that video games attempts all too often but almost always fails to portray with accuracy, but actually that’s not the case. Sure, it plays it safe with the politics by giving these big topics a bit of a schlocky, pulpy treatment but I think this actually works in its favour reasonably well. It adds more to the world than just your usual tired anime tropes.

But then again, on first impressions, the cute character design and high pitched American voice acting is enough to turn my cynical black heart to ash by the sheer power of cringe alone. But Trails of Cold Steel really made me want to persevere. It pushed past my natural cynicism and really won me over. Each character has their own unique story and personality, and they’re not just archetypes to aid the player in playing the game, they’re written with real warmth and character, and early on the story sets up several sticky situations and awkward in-fights for you to carefully feel your way around.

Not all of these new recruits really like each other, and Trails of Cold Steel actually changes to take that into account as the game goes on. It’s good stuff. The world they’re running around in is also a vibrantly detailed and lavishly colourful depiction of early 20th century Europe, sort of similar in vein to Valkyria Chronicles. Rolling green hills, clean pastel coloured townships and turn of the century brickwork are emphasised by crisp lines of detail and it looks great, even taking into account the game’s age. It’s nice to see lots of bright colours used in such a wonderful way.

This is aided in large part thanks to an incredible port by the eponymous Durante – famed for his work on the original Dark Souls port for Steam – which updates the original PlayStation 3 version of this game on to modern PC standards. Multiple resolutions and a decent amount of configuration options mean that any old machine should be able to run Trails of Cold Steel at a decent frame rate, all the while maintaining the consistently pretty art style that makes the world look so good. It won’t win any awards for fidelity but that’s fine – Trails of Cold Steel looks great regardless. 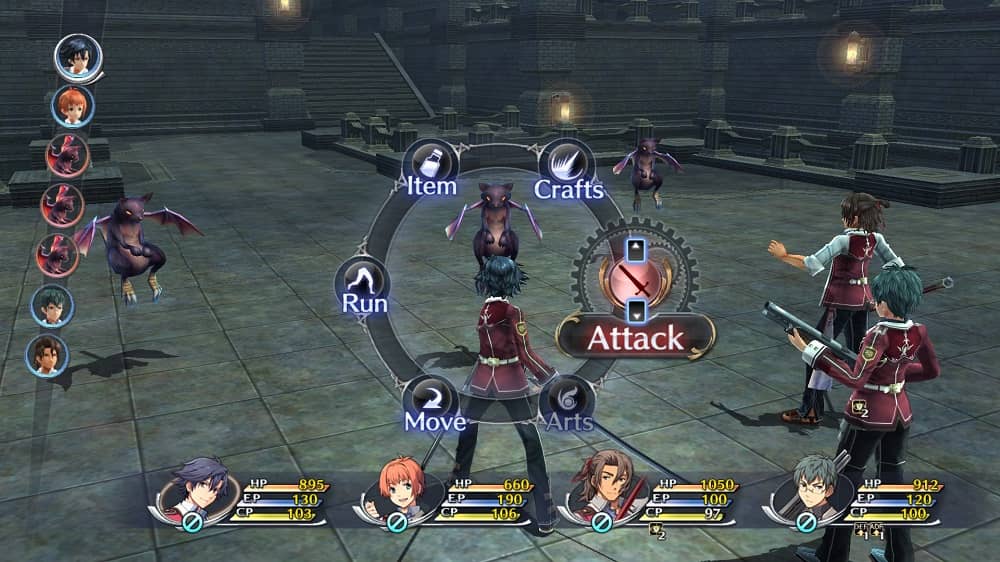 Once you’re past the relatively on-rails prologue section, the game thankfully opens up with hub areas that you’re free to explore and discover at your own discretion. You have a list of requests to see to – some essential, and some not so essential – with some time to hang out with your class mates. The narrative eases up its chains on the player too, giving you some tasks to look into and then pushing you out of the door to explore on your own. This is where Trails feels best – the reigns of the narrative no longer yanking you through streamlined story segments, nor is it needlessly labouring you with plot details that you don’t need to hear.

When you’re given tasks in which you are free to investigate in your own time, playing Trails of Cold Steel is an absolute blast, and its easy to rack up hours just wandering around and getting a sense of the world all on your own. But it still occasionally tugs on the leash at inopportune moments – desperate to tell you some minor detail or labour the same idea again for the 6th time in an hour – it never wants you to be without a clue or without direction, but sometimes, that’s really what I want.

In those moments the story feels so painfully spoon fed that it’s hard not to have your intelligence insulted. ‘Yes, I know’ you’ll groan, wishing the story would stop getting hung up on making sure you understand everything. Perhaps it’s more of a trope leftover from anime, of which this game is clearly influenced, but it often felt like no matter how far you get away from the monstrously overbearing story, it constantly tugs the leash and draws you back into its oppressively expositional arms. And that’s a problem with JRPGs at large – it’s not necessarily the bright colours and squeaky, cutesy voices – it’s the dismally exhaustive narrative that drowns the player in exposition.

Combat, when you are allowed to partake in it, is your standard turn-based RPG fair. You take turns to move or attack the enemy, with the enemy doing the same – you know the drill. In a lot of ways, this is where Trails of Cold Steel is, thankfully, faithful to its genre – the classic JRPG. It’s nothing too original, bar a few interesting ideas sprinkled into the mix, but having the tactical freedom to use your characters strengths to best your foes is a nice break from the exposition heavy chapter introductions. 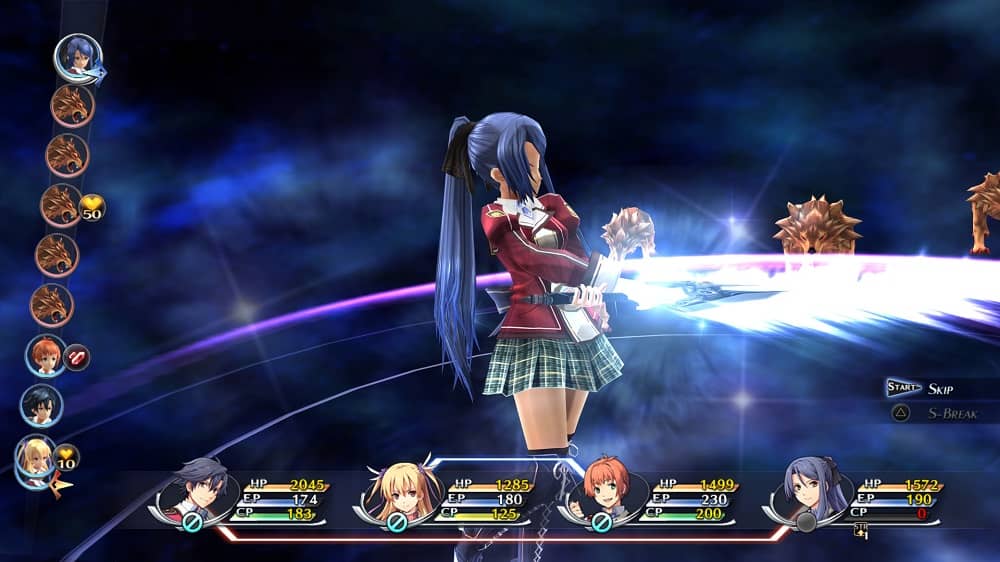 Combat often centres around working out your foes’ weak spots and exploiting them as much as possible. A lot of the early game monsters, for example, aren’t too fond of being burnt to death apparently (who’d have thought?). Neither do they like being hit by slashing physical attacks, so you can use that to bleed a lot more damage than you typically would have by employing a combination of both. Failure to keep an eye out for these weaknesses can often mean a lot of unnecessary problems for your band of plucky classmates. This is perhaps Trails Of Cold Steel’s strength; you might get part way through the game just spamming the same attacks, but if you want to really navigate all the challenges the game throws at you then you’ll have to understand the nuances of your enemies to survive past chapter one.

You can also use your party’s friendships to your advantage, too. Socialising with your classmates deepens your bond with them, which in turn will influence some actions within combat. This is a wonderful addition that makes getting to know the quirky cast of Trails of Cold Steel feel really worthwhile. Banter shared between two pals in the midst of a fight will raise a smile more often than not, and if you manage to unbalance a foe with a well-placed attack your buddy will jump in to deal some extra damage with you. This means that some of the friendship links you’ve set up within your party really start to pay off.

Links are levelled up both in and out of combat, mostly by spending some quality time with them on your free days. This is one of the few ways in which Trails of Cold Steel is happy to let systems and story exist peacefully together rather than sending you to the RPG cut scene gulags. You can work away at developing your friendships with the game’s frankly charming cast of misfits safely away from combat, so that when they do get into scraps they’ll lend a hand. Not only does that help give combat encounters a bit more depth as you work towards building up a succession of attacks to unbalance a particularly nasty foe, but it also contextualises the backstories of each of your classmates and enables you to visualise each of their story arcs in relation to yourself.

Trails of Cold Steel ticks a lot of boxes of what I dislike about JRPGs, but despite my issues I’m more than happy to say that I enjoyed my time with Class VII and would happily recommend it to anyone looking for a genuinely well made, if slightly limiting, JRPG. I have some serious reservations with the storytelling, and the often cringe-inducing anime tropes are enough to make you want to rub salt in your eyes, but Trails of Cold Steel still manages to be an impressively entertaining ride. This is a game with a long, arcing story that takes some awkward, colourful teens through their turbulent teenage years with a fun and vibrant world to explore, charming characters to befriend and a turn-based combat system with a surprising amount of depth once you look beneath the surface.

Legend of Heroes: Trails of Cold Steel is available on PlayStation 3, PlayStation Vita and PC. We reviewed the PC version.