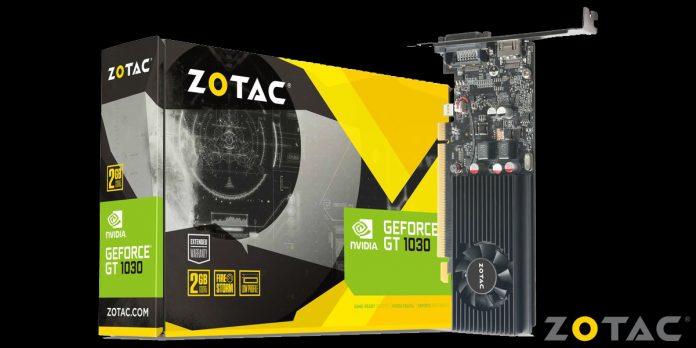 Talking to most PC gamers, they’d have you believe you need to spend at least £200 — probably more — on a graphics card for it to be anywhere near decent.

Sure, a lot of powerful graphics cards will take a significant chunk out of your bank balance, but budget options do exist — and ones that are surprisingly decent, at that.

Zotac recently sent us a brand new NVIDIA GeForce GT1030 to try. Retailing at around £70, the 1030 is the true budget option in NVIDIA’s core range, which goes all the way up to the £800 1080Ti. You don’t need to be a genius to work out that the higher the price and the better the model, the more powerful the graphics card is going to be. Being at the true bottom end of the scale, I didn’t think I’d get much out of the 1030. Maybe a slight improvement over my processor’s on-board graphics, but nothing that could handle any game that was more intensive than, say, something like Undertale. Happily, I was proved quite wrong.

While the GT1030 isn’t going to set the world on fire in terms of graphical performance, it surprised me just how well it handled the few test games I threw at it. For £70, it really is a true penny-pinching option. Knowing this, you can build a viable gaming PC that’ll run the majority of the latest games just as good as a PS4 or Xbox One for around £300.

My current work PC is a bog-standard office PC — an AMD A8 processor, 8GB RAM — with a GTX 1050 stuck in it. It’s no powerhouse, but it does the job nicely. I can run pretty much any game I want on high (okay, some I have to turn down to medium, like the recent Agents of Mayhem) with a solid 40-50 frames per second. If you’re a person who values framerates into the 100s, playing every game on “ultimate” and having the option to tamper with 4K and VR, then obviously, a 1030 is not the graphics card for you. But if you’d like the option to play games on your run-of-the-mill home computer without breaking the bank, then it makes for a serious contender.

I tested three games, all with built-in benchmarking tools: Dirt Rally, Tomb Raider (2013) and Grand Theft Auto V. I ran them all at 1080p, with settings first on medium, and then turned up to high. I even tried Tomb Raider on ultimate, with the fancy ‘TressFX’ hair options turned on. I was sure the 1030 would completely bottle there, but no, it held its own. In fact, all three games were completely playable on ‘medium’ settings, and Tomb Raider and Dirt Rally run smoothly on ‘high’. Here’s my results, with the GTX 1050 for comparison:

And here’s the average FPS of each title on both graphics cards, in a graph form. Just because. I don’t get to make graphs very often these days. Humour me. 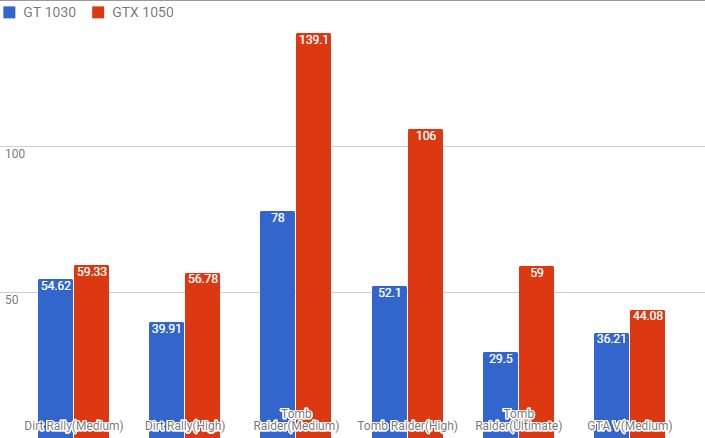 This EuroGamer report from 2014 states that the console version of Tomb Raider runs at an average of 29.98fps on Xbox One, and 53.36 on PS4. So the fact that a £70 graphics card can keep up with – and in some case outperform – the latest consoles – is pretty impressive.

For the record, I tried running each of the three games on the on-board graphics for means of further comparison. Tomb Raider wouldn’t even boot; the menus of Dirt Rally were so painstakingly slow to navigate that I couldn’t even get to the benchmarking tool; and while GTA V, surprisingly, did load, once I’d started the benchmark it was clear it wasn’t going anywhere: the counter proudly displayed ‘0.2fps’. An extra £70 for a 1030 then, even if you’re not going to play games all that often, is definitely worth it.

It’s interesting to note that Tomb Raider was the only game of the three where the GTX 1050 made a significant improvement. Whether the marginal increase in performance is worth the extra £40 or so is down to personal preference — and it’s also worth considering the possibility that my basic processor could be throttling my performance capability anyway. But still, the fact remains that the GT 1030 — a graphics card for £70 — can run the majority of games at 1080p and a solid framerate, even when coupled with a very basic PC model. Couple it with an i3 or i5 processor, and those results will likely be even better.

If you’re on a very tight budget and thinking of dipping your toe into PC gaming, I’d highly recommend looking at a GT 1030. Coupled with an entry level PC that can be purchased for around £200, you can grant yourself the ability to play the vast majority of PC games with no problem. Of course, if you’re a PC gaming veteran or want to be able to enjoy ultimate settings on every game, this clearly isn’t the option for you. But you have to pay a damn sight more for the privilege.