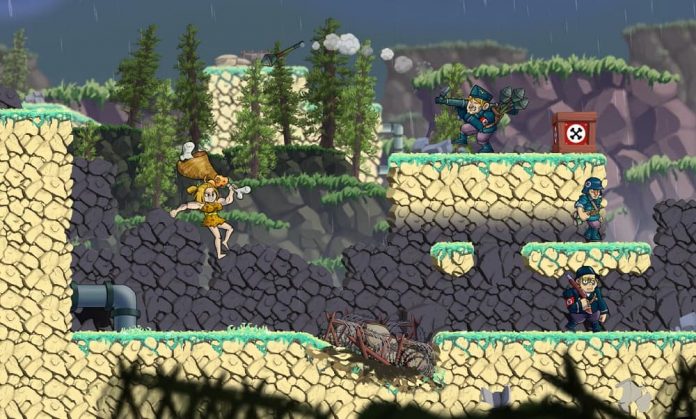 Caveman Warriors was a game I was rather excited to play after watching its zany Kickstarter trailer.

Promising good old-fashioned 2D platforming gameplay for up to four local players, it looked and sounded the part, but after playing the thing all I can do now is shudder at the thought of playing it again.

It’s not that Caveman Warriors is totally unworthy of praise; it’s just that it’s so old-fashioned that any fun it provides is short-lived and often turns into frustration. You make your way from left to right, jumping on platforms and dealing with a pleasant selection of dinosaurs, aggressive plants and hostile cavemen/women, but while its foundations are solid, it all just feels a bit cold and heartless. All the ingredients of a great 2D platformer are there, but they’ve just been thrown into a bowl with reckless abandon and hastily beaten rather than being given a gentle stir and a loving knead. 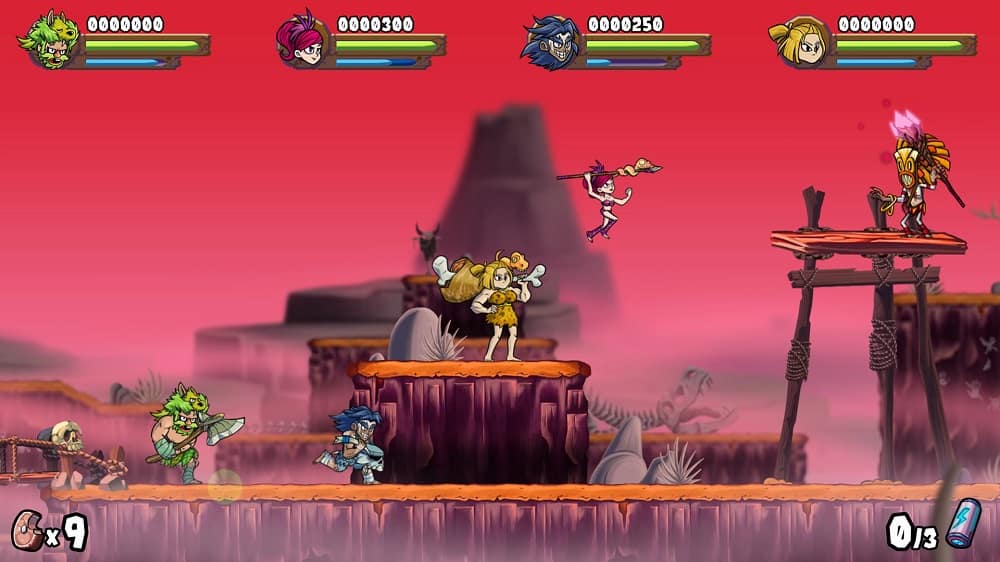 When the coast is clear your caveman/woman moves at a brisk pace and the controls are nicely responsive, but it’s when you encounter danger that problems emerge. Checkpoints are scarce and health pickups only restore a marginal amount of health, making Caveman Warriors a game where you need to be aware of each enemy’s attacks and dispatch them appropriately. It’s all well and good, but it slows the pace of the game down unnecessarily when you’re playing on your own, and when you’re playing in co-op the screen gets so hectic that’s it often nearly impossible to see what’s going on. The result is that you’ll sometimes take damage without even realising it, leaving you dead as a dodo in a flash.

Four cavemen/women are available, each with their own stats, attacks and special abilities. It’s handy, because each level often requires you to make use of certain abilities to proceed, forcing an enjoyable degree of co-ordination when playing in co-op. In single player, you can simply switch between each of the available cavemen/women with the press of a button. It’s a good way to get players to try out new gameplay mechanics, though players will undoubtedly find a favourite character and rush to claim them as their own. Especially seeing as some seem much more useful than others. 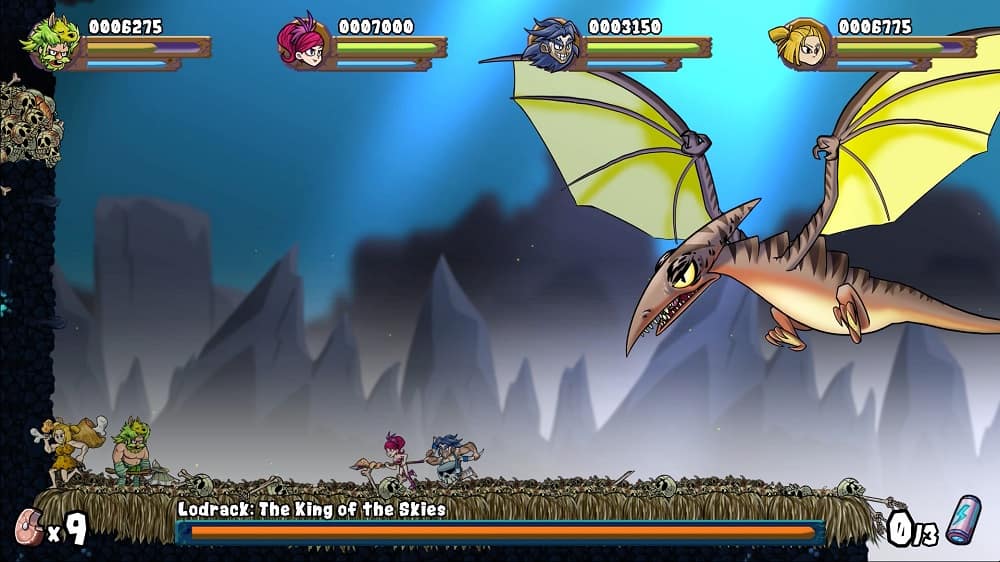 The levels themselves are quite sprawling affairs, full of environmental dangers such as chasms and spikes which are just as eager to kill you as their denizens, though thankfully falling into them doesn’t kill you outright. Their common hostility doesn’t prevent each level from having its own unique theme however, and they are all fairly easy on the eyes. It’s just that you’ll probably get fed up of replaying huge chunks of them when you die and get taken to a faraway checkpoint, often simply because you couldn’t see or comprehend what was really going on.

Those who are persistent will certainly have some fun though, especially when it comes to the game’s bosses which are wonderfully designed. Despite Caveman Warriors’ child-alluring visuals, it’s clear it’s made for the type of gamer who remembers characters such as Chuck Rock, and who laughs in the face of the challenge provided by titles such as Metal Slug. It’s colourful, chaotic and has about as much depth as a small puddle, but for most people it’ll be about as much fun as a wet fart: initially amusing, before giving away to despair and irritation.

Caveman Warriors isn’t so much a bad game then; it’s just one that’s a bit bland and exceedingly niche. While its wonderfully sharp 1080p visuals have their feet firmly grounded in the modern age, many of its gameplay foundations are rooted in prehistoric times. Maybe it’s meant to be that way for nostalgia, but nostalgia only really works in your favour when people already have an attachment to your property/franchise/brand. When it’s something new to the market like Caveman Warriors, it just leads to apathy and disappointment.

Caveman Warriors is available on PlayStation 4, Xbox One and PC. We reviewed the Xbox One version.