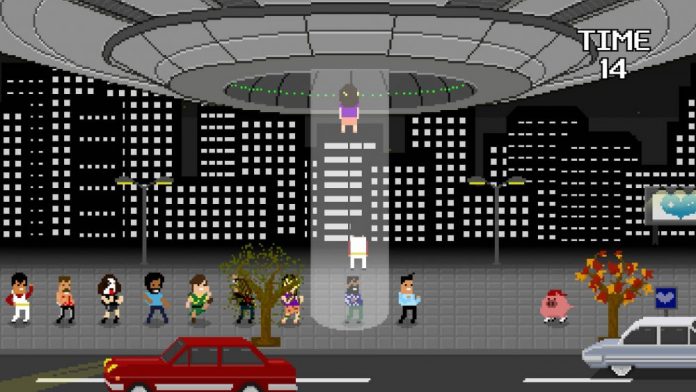 Conga Master is a game about invading people’s personal space long enough until they resign themselves to joining your ever-growing dance line.

While in reality, being forced to conga through a nightclub (presumably against your will) seems like a nightmare scenario, when it all happens within a colourful, pixelated videogame setting, it’s all incredibly good fun. Everyone looks like they’re having a great time; there’s no-one sobbing in a bathroom cubicle because they really don’t want to join the conga. Everyone’s ready and raring to go — well, after you’ve conga-surrounded them in a not-at-all threatening way and made them unable to escape for what must be several minutes — and it’s a jolly ol’ time for all.

Originally released on PC back in 2016, Conga Master has danced its way to console formats, with its latest version, Conga Master Party landing this week on Switch. If you’ve previously played Conga Master, you’ll find all the same content you know and love bolstered with a couple of additional multiplayer modes, new characters, and new levels. And if you’re new to the game, then the Switch version is hands-down the best way to play. 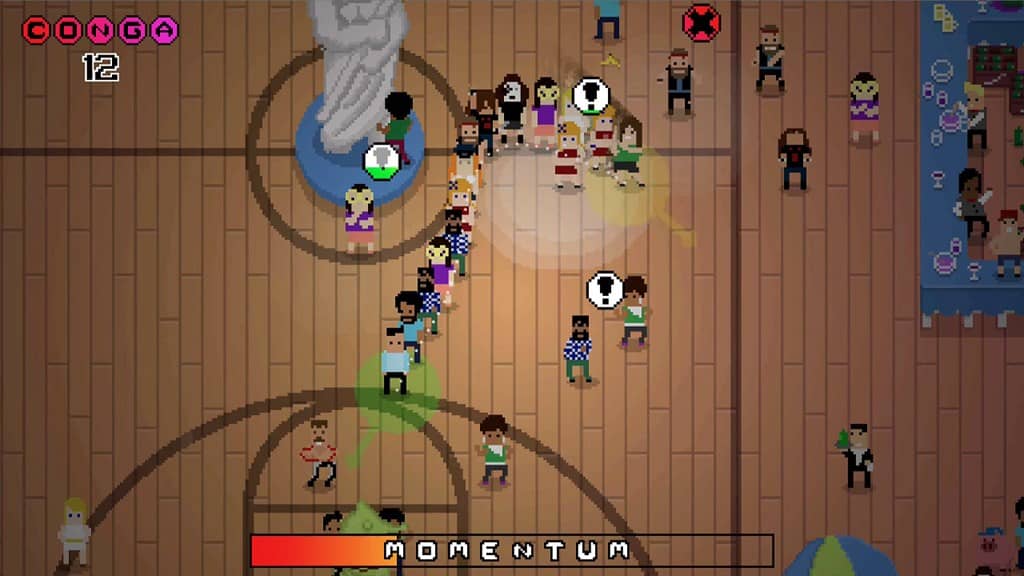 Conga Master‘s gameplay is incredibly simple. So simple, in fact, that it only requires the input of two buttons: on Switch, that’s your left and right trigger. The aim of the game is to form a conga train by dancing near to people until a bar above their head fills and they join your funk train. You’ll conga onwards automatically, and pressing the triggers will simply turn you left and right.

There are obstacles to avoid, too. Janitors will be fervently mopping up the floor and banana peels litter the ground — running into either will send you speeding off course. There are also bartenders wandering around, who’ll make you a little tipsy should you knock into them, making it hard to control your conga-ing for a few seconds. Lastly, big beefy bouncers will be parading the dance floors too, and as the miserable sods are averse to your dance line jovialities, they’ll shove you flying across the room should you conga a little too close to them. You also need to avoid colliding with other partygoers, because, you know, that’s just rude. 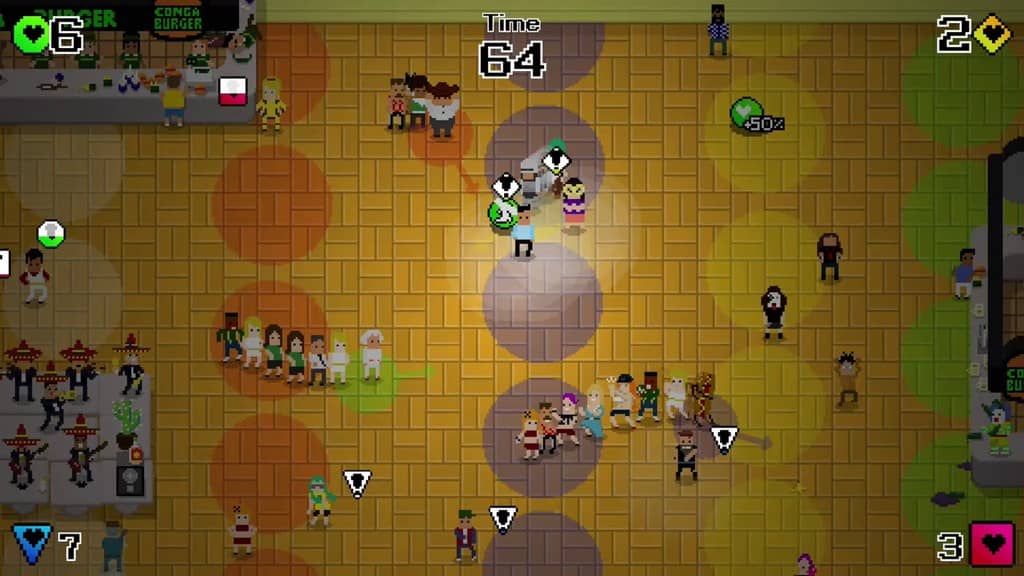 In story mode, you’ll progress through seven levels, each set in their own location. There are four types of dancer, and the aim of each level is to recruit enough of each type to form an ultimate conga line. Once you’ve hit the quota of each type, the exit will open and you can conga your way out. The caveat is, however, you need to keep your momentum going. A ‘momentum’ meter sits at the bottom of your screen, and while ever you’re not recruiting new conga-ers (congees?) that bar will rather quickly deplete. Keeping it topped up means constantly growing your conga line, and scoring combos by recruiting several people at once. It’s easier said than done, and the later levels are fiendishly tricky thanks to dancers being awkwardly spread out around a large area.

It took me two or three hours to work through the story mode, and that involved many, many retries of a couple of the later levels. If you’re already — ahem — a “conga master”, you’ll no doubt whizz through each level in ten minutes or so. For you, then, there is the endless mode, where you can play through any one of the locations with the sole purpose of growing the longest, most impressive conga line known to man. It’s a shame there’s not any global leaderboards here, so you can only battle against your own best score. Still, a little bit of competition with your own consciousness never hurt anybody. 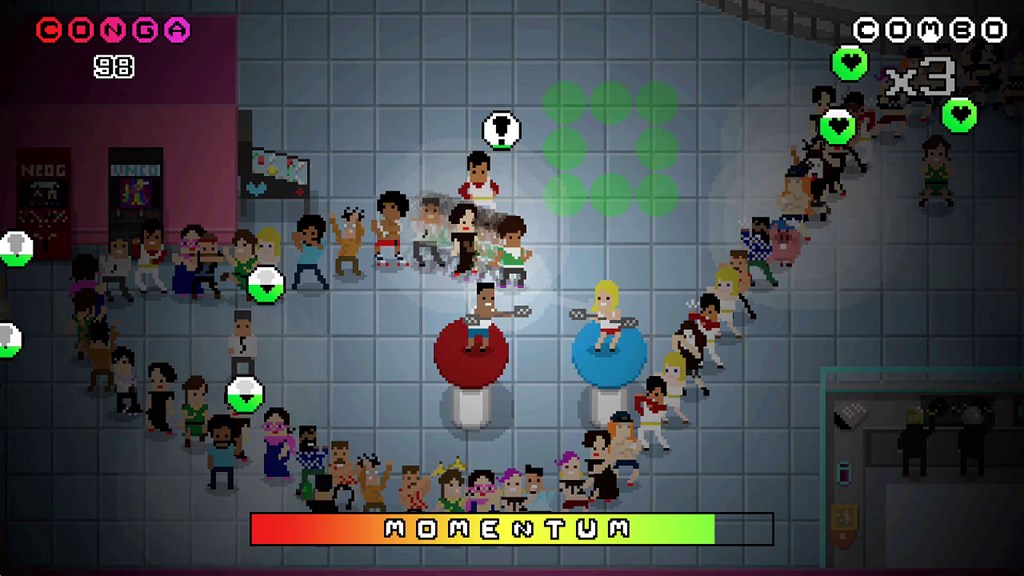 The star of Conga Master Party‘s package is its suite of multiplayer games. The titles alone — blatantly ripped off of a number of popular franchises — will make you guffaw, and with a friend or three by your side on the sofa, they’re all a recipe for a Real Good Time. There’s Cut the Conga, for instance (a parody of popular mobile game Cut the Rope), where up to four of you battle on the same screen to grow the largest conga line, cutting each other’s in half should you cross through them. Or how about Grand Theft Conga — I won’t insult you by spelling out what that parodies — a capture-the-flag style game where you all battle over dancing with the one lone dancer. It’s a little creepy, sure, but it’s great fun.

There are eight multiplayer minigames altogether, and while most of them are fairly similar in their goals — they’re all conga-based, obviously — they’re all pretty entertaining. You may not waste the evening away playing them, but if you have a couple of friends over, hilarity will ensue even if it’s just for 30 minutes or so.

For the lone wolf though, Conga Master’s single player offerings are more than enough to make the game worth buying. Its incredibly simple gameplay means its accessible to anybody, and it’s hard not to be charmed by its cutesy pixel graphics, designed with humour interwoven into every last detail. It’s the perfect pick-up-and-play game, and the Switch’s portable nature means Conga Master Party is right at home.