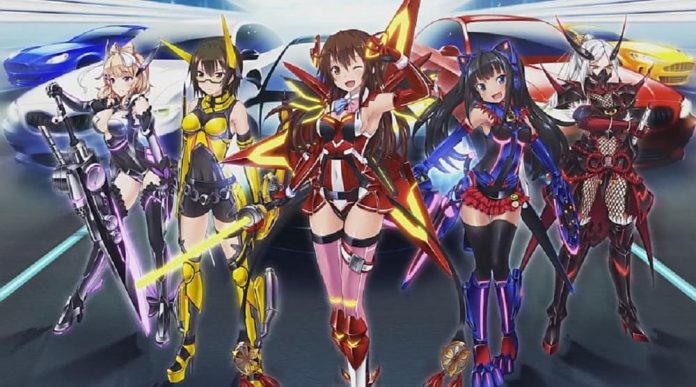 Drive Girls is a game about ladies that transform into cars. Sometimes they fight bugs, sometimes they race each other, yet neither seem to be any fun.

The first time I started up Drive Girls, I wasn’t quite sure what to expect. The trailer showed a buxom anime girl flip, turn into a car and drift into an army of bug-looking robots. A few moments later, her clothes popped off like the cork to a Champagne bottle, as if to celebrate her newfound freedom of attire. It looked like the perfect combination of weird humour and odd eccentricities that could create another classic budget title on the Vita, which still somehow thrives with its library of niche Japanese games.

Putting aside the fact that Drive Girls is a Senran Kagura clone instead of the Japanese, female focused Need for Speed the name suggests, it’s opening hour was enjoyable. The game takes place on Sun Island, a place where seemingly everyone can transform into a car. Our heroine, Lancier, tries to join the city’s Emergency Response Team but gets bamboozled into becoming a Drive Girl instead. Rather than saving people in distress, her job is to now fight off swarms of bug-robots from attacking the city. 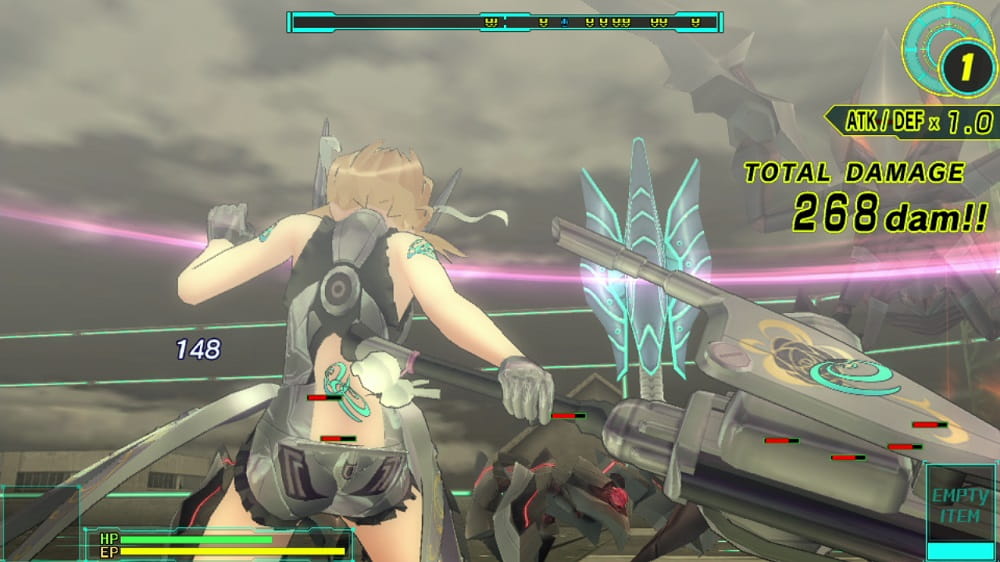 The wacky setup of Drive Girls’ plot is played straight, which I found fairly charming. Unfortunately, it slowly began to wear my patience thin as most of the plot revolves around discovering each of the Drive Girls’ backstories. Of course, they’re all dreadful. Along with the aforementioned Lancier, you are accompanied by Regalith, Galaxa, RR Thirty-Five, and Seven. All five of which feel paper thin, sticking to their respective tropes. Even weirder still, the tone of the game seems to bounce around a lot more than it should. While it’s obviously a comedy, there are some serious moments too, but all I could think about was spamming the continue button to get to the next stage.

I suppose I should also note that each character seems to represent a real world car to some extent, at least I think they do. Lancier being a Mitsubishi Lancer, Regalith a Buick Regal, RR Thirty-Five a Nissan GT-R, and Seven a Mazda RX-7. I couldn’t really figure out what Galaxa was supposed to be, but if it’s any consolation, the game focuses more on the girls than it does the cars. I would assume it’s because the licensing fees are simply outside of Drive Girls’ budget, but there’s never an explicit mention of a car maker in the entire game. It seems much more concerned with the girls’ boobs than their brands. 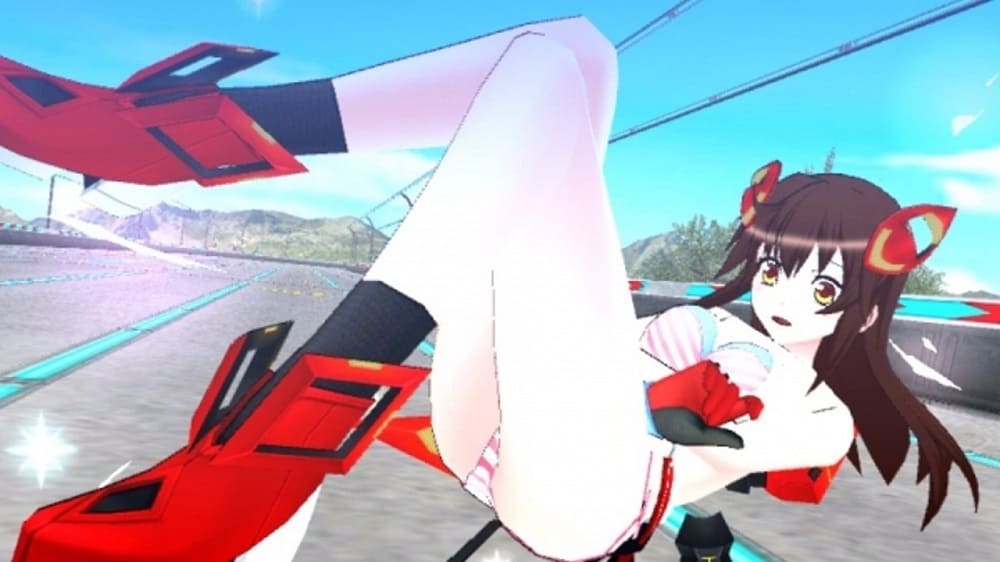 So the characters and the plot are bad, sure, but that’s probably not the main focus of a game called Drive Girls. The campaign stretches across 24 missions, each of which being playable with one of the five Drive Girls. Each stage works simply enough, usually requiring you to defeat a specific boss or a certain number of enemies. There isn’t a ton of variation between bug-bots, most of them looking fairly similar. Yet, Drive Girls pulls through with an interesting fighting system to do combat with.

When in… girl mode? I’m not really sure what to call it. Let’s say girl mode. So, when you’re in girl mode, you have light, heavy and charge-up attacks at your disposal. With the gear meter, you’ll also gain power over time until you reach “over-drive” mode, which lets you attack without expending energy. Depending on the Drive Girl you’ve chosen, you’ll either be quick on your feet and can jump between combos fluidly, or will hit with more impact but sacrifice your speed.

The system is fun if you stick to the way the game wishes you to play, but I found myself cheesing my way through multiple campaign missions with relative ease. It wasn’t until about an hour-in where I had to change up my strategy, yet even still, the entirety of Drive Girls is easy enough to coast through. Things get much more interesting when you turn into car mode of course. Control is finicky and you won’t be able to dole out as much damage, but it’s impossible to resist the urge of drifting and sliding your way into enemies. 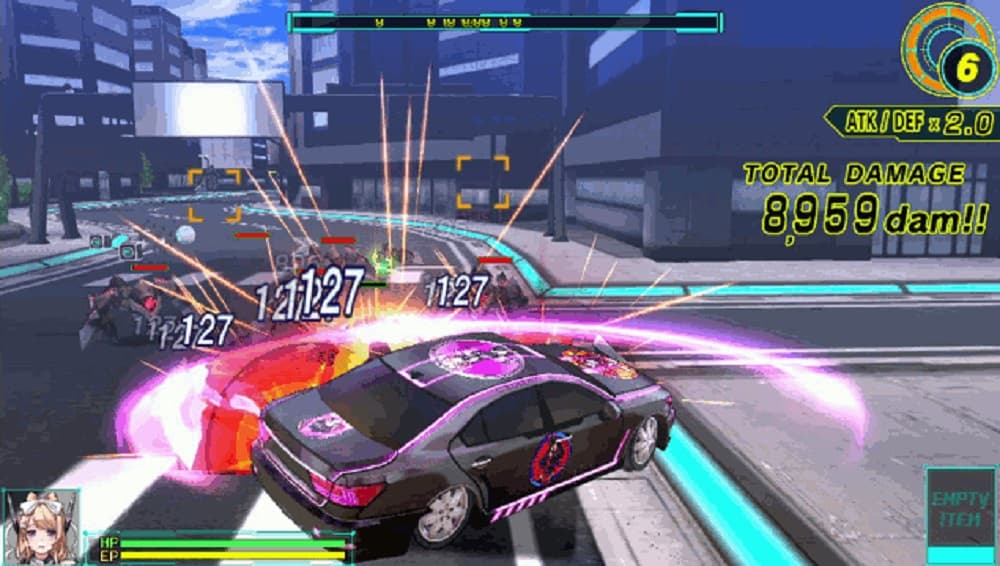 It became pretty clear a few hours in that I was having more fun laughing at the game than actually playing it. My Drive Girl, constantly shifting into a car and smashing into the boss before getting cut down to a sliver of health, her clothes being shredded to their bare essentials, never failed to amuse. Yet, I’m not sure this is what Drive Girls wanted me to do. Its characters were annoying and wooden, and its fights felt repetitive. The fun I had with Drive Girls was forced, and of course, that kind of fun can’t last long.

All in all, I’m not really sure who Drive Girls is for. It’s too short and generic to satisfy most fans of the genre. It fails on nearly every level, never able to outlive its initial gimmick. The game leaves its one joke of “ladies, but also cars” stranded amid a desert of awkward anime tropes and reiterated levels forcing you to relive the same Drive Girls gameplay loop forever. It’s not that Drive Girls is simply repetitive, it’s just somehow boring. And that’s not something I thought I’d say about a game where women transform into cars, fight bug-robots and lose their clothes. 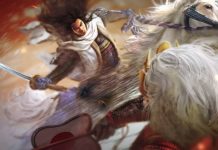