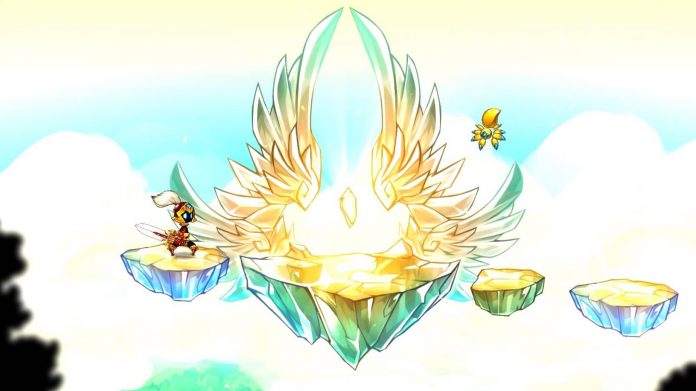 After reviewing the first episode of Pankapu, I was interested to see how the second and final episode of the game would bring the conflict in the dream world of Omnia to a close.

Having now spent around eight hours traversing through forests, caves, futuristic-looking areas and the like, my opinions remain largely the same as they did from first exposure. Aside from some difficulty spikes in late-game boss battles, Pankapu consistently presents the player with a charming world and some excellent level design, and tight controls that lend themselves to some genuinely enjoyable platforming. 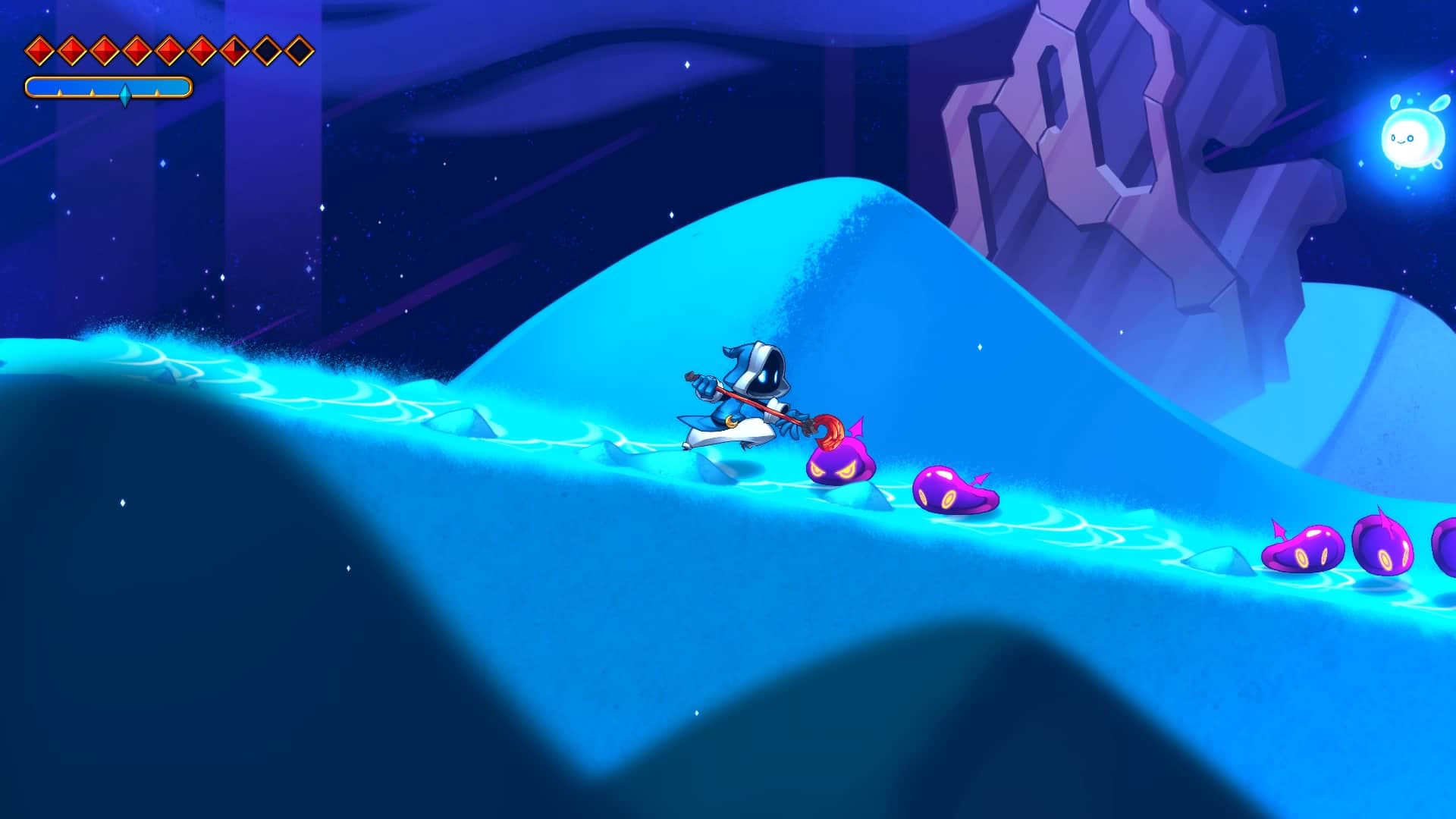 In my previous review, I described Pankapu’s narrative as two intertwining stories – one following the dreamkeeper Pankapu as he seeks to purse the nightmare creatures from the world of Omnia, and the other telling the story of the young child Djaha’rell. Pankapu’s quest is told to Djaha’rell through the narrator’s storytelling, and flashbacks to the young boy’s past are shared as Pankapu locates upgrades throughout the game.

I will admit that, while I was left a bit disappointed by the lack of answers provided by the unclear ending, I can still appreciate the style of narrative direction that Too Kind Studios set out to achieve by going the route that they did. It’s hard to explain all of this without going into spoiler territory, but in the overall package, the gameplay steals more of the player’s attention anyway. As a whole, however, the narrative does a serviceable job of bridging the gap between platforming sections.

And platforming sections are where Pankapu absolutely shines. With mildly floaty jumping and tight precision on movement allowing for fine-tuning, positioning the little dreamkeeper on each platform is a delight. I was even more enthralled by the satisfying level of difficulty in some of the platforming sections in episode two. 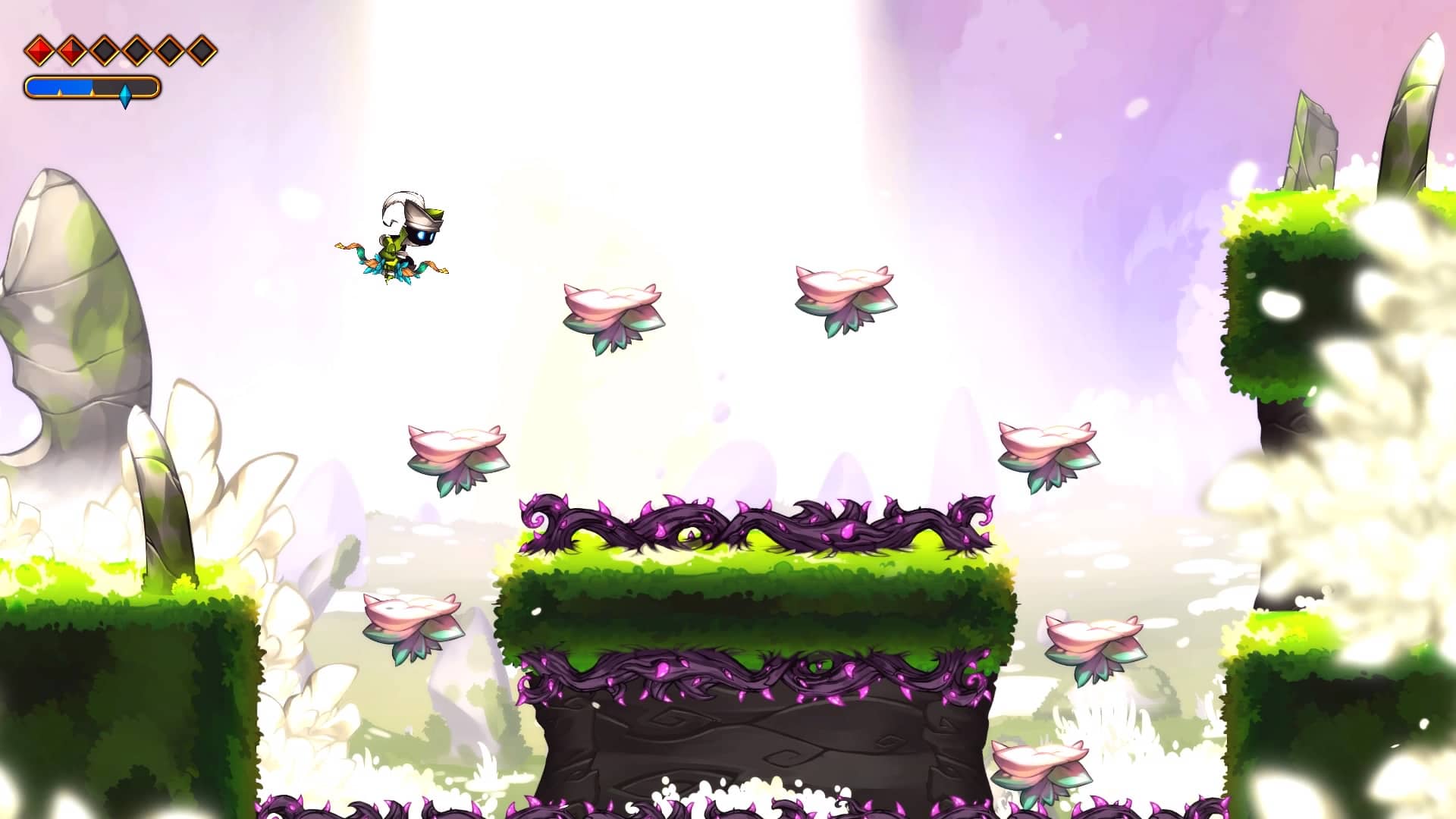 As someone who grew up on the platforming greats of the past, I was pleasantly surprised to experience some sections that genuinely challenged me. As a gameplay mechanic, Pankapu is able to shift between three different forms – known as Aegises – that alter styles of movement and combat prowess, and the platforming will at times have the player shift between Aegises mid-air to reach faraway platforms. The steady flow of unlockables and upgrades for each Aegis also encourages return visits to each level to locate remaining upgrades and little Mudjin creatures to increase Pankapu’s max health. And with such great level design, returning to levels is far from a chore.

The Aegises also make combat much more engaging. With enemies that can only be taken down in specific ways (often requiring a skill from a specific Aegis), hacking and slashing may not get you as far as you might initially think. Between the sword-wielding Bravery, the nimble bow-user Ardor, and the time-master Faith, the player has a great deal of variation in how they choose to deal with each encounter. 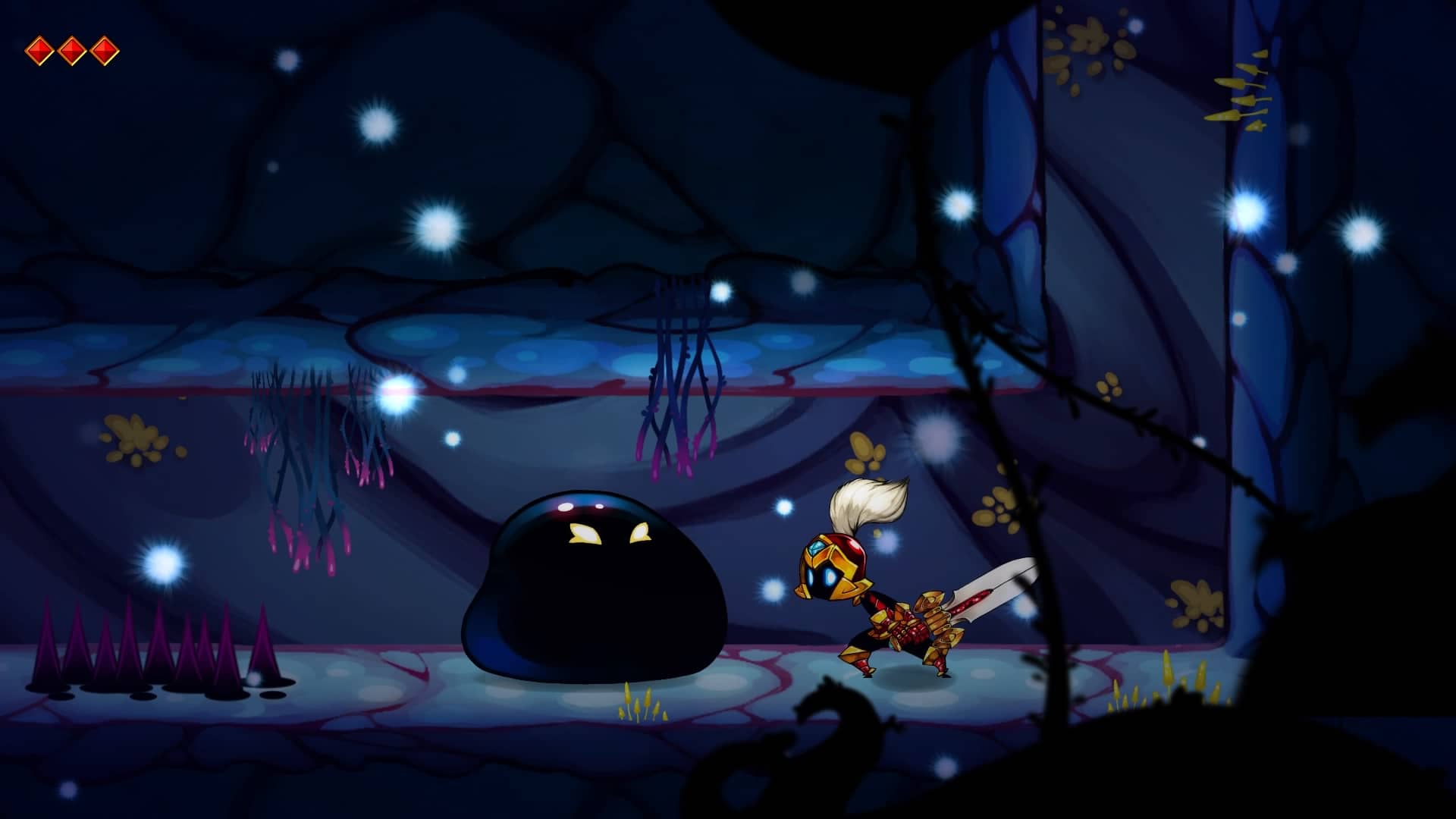 To allow for even more diversity in combat, Pankapu allows the player to augment each of the Aegises with one of four Nebulas – modifiers that provide unique effects to each of Pankapu’s forms. The earth-based Suwata Nebula allows for area-of-effect attacks in the form of thorns shooting out of the ground, while Timako lessens damage in exchange for greater damage reduction, for instance. In a lot of combat scenarios, I found myself swapping between the Ardor Aegis with the Inyan Nebula to inflict fire damage over time and Bravery with Timako to protect myself from incoming damage. Nebulas also modify Pankapu’s special attacks that use up his Anima meter (think magic meter) – changing a massive charge strike to a protective barrier, for example. Needless to say, there are a lot of options here, and that flexibility is very welcome.

One inconvenience that I did encounter, however, was a noticeable difficulty spike in a couple of the late game bosses. I enjoy difficult boss battles very much, but these two instances felt unnatural to the level of difficulty progression that preceded them in the rest of the game. Eventually I did manage to defeat them, but the amount of deaths that took place before achieving victory made the accomplishment feel less rewarding.

Sound and visuals are as charming as ever, with whimsical melodies elegantly guiding me along through the game’s vibrant world. Variation between stages is quite impressive, where even levels next to one another on the world map still feel unique enough to stand out on their own. 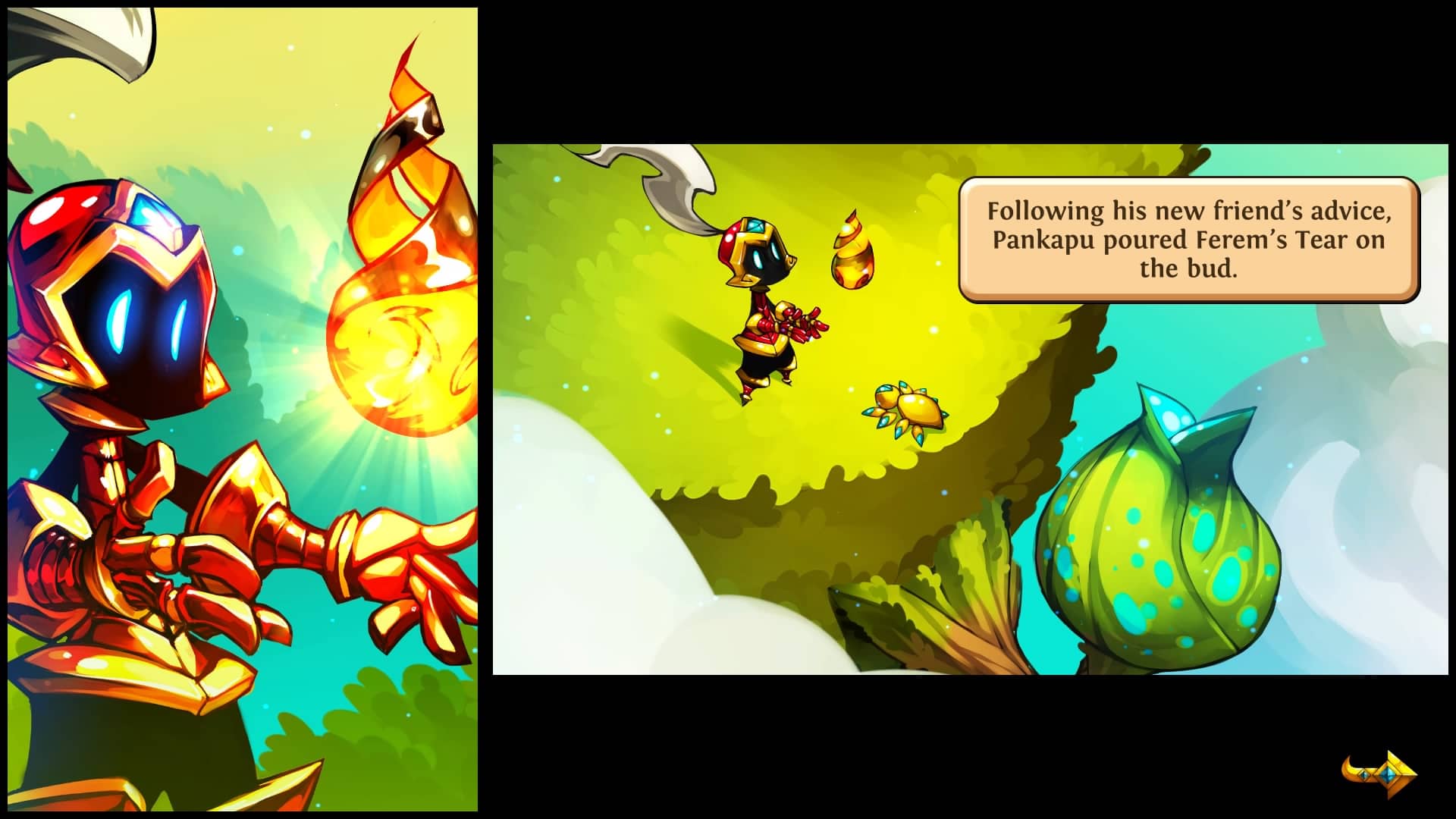 In two instances, I did experience some significant frame rate drops and freezing while on large maps and dealing with sizeable hordes of monsters, but the game corrected itself quickly, back to being perfectly smooth. In my review of the first episode, I dealt with very infrequent freezing on the world map, making me unable to progress to the next level. I’m pleased to say that I didn’t encounter this at all in the finished product, nor did I experience any other bugs or issues.

After experiencing the finished product, I’m pleased to see that Pankapu turned out to be such a charming and worthwhile adventure. It made me reminisce about the platformers of the past in the same manner as Wonder Boy: The Dragon’s Trap, but it did so through the use of an enticing new world, sprawling with secrets and collectibles to discover. Rare difficulty spikes aren’t enough to steal the spotlight away from tight controls, solid level design, and an enticing world to explore. Amidst the plethora of indie platformers that release these days, Pankapu is one of the better adventures to be had.

Pankapu is available on PC, PS4, Xbox One and Nintendo Switch. We reviewed the PS4 version.