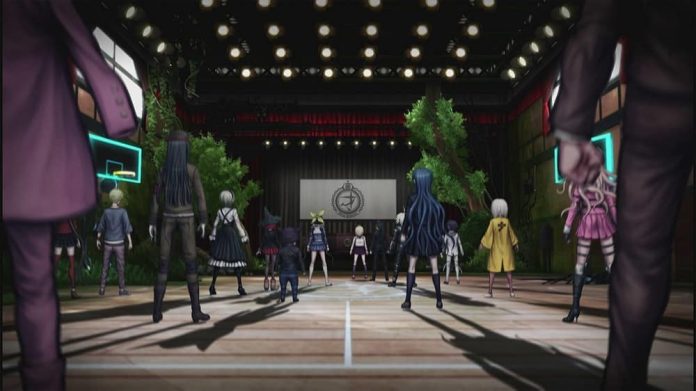 If Spike Chunsoft’s Zero Time Dilemma dials the lunacy up to 11, then Danganropa V3: Killing Harmony sets fire to the speaker, shovels the ashes into a rocket and launches it into the stratosphere.

I honestly have no idea what’s going on at Spike Chunsoft, I can only imagine they’ve inadvertently channelled some insanity-inducing Lovecraftian entity. How else could you explain the massively deranged state of Danganropa V3: Killing Harmony. This is a game which smashes together Battle Royale and Phoenix Wright: Ace Attorney then hooks the resultant monstrosity up to a Red Bull filled drip-bag. But despite being mad as a fish, Killing Harmony nevertheless manages to be a brilliant, stylish spectacle.

The premise behind Danganropa V3: Killing Harmony is fuzzy at best, not least because it takes great pleasure in confounding your expectations and generally messing with your head. Though if you haven’t tackled previous entries in the series, fear not; Killing Harmony requires no knowledge of the other titles. The game begins with you, as one of several teenage prodigies, waking up in an abandoned high school. Normally, this’d be the cue for a survival horror outing, you and your fellow students fleeing from a range of gruesome monstrosities, but the horror here is far more human. 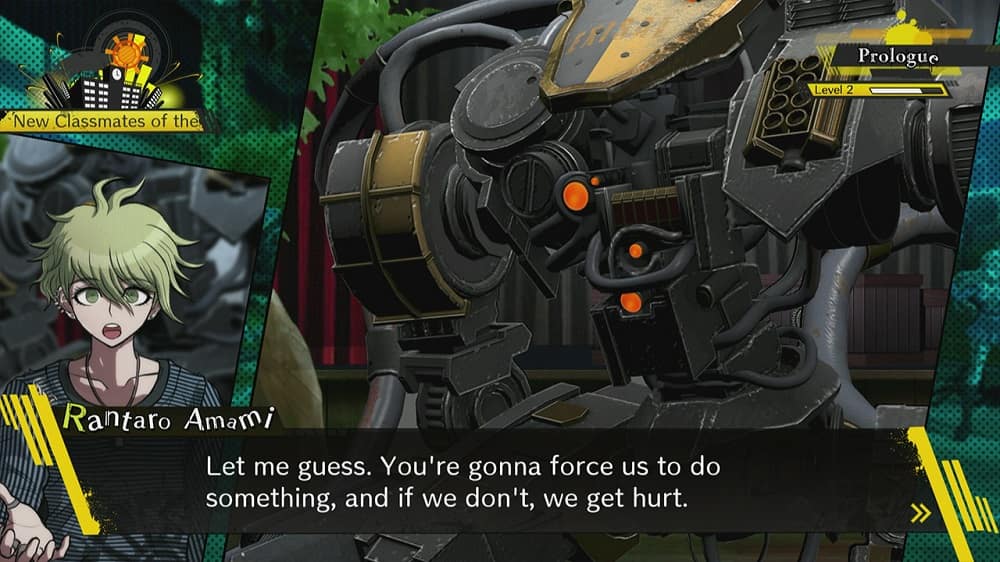 Under the watchful eye of Monokuma, a sadistic robot teddy bear, you and your temporary allies are charged with covertly slaughtering each other until only two remain. Once a death has occurred, the remaining students have to conduct a “class trial” to expose the murderer. Succeed, and they live a little longer. Fail, and the murderer walks free while his or her fellow students are all executed. Well, in theory, anyway. In actuality, Danganropa V3: Killing Harmony is a visual novel, and, as such, won’t let you venture too far off the beaten path. Nor can you engage in the slaughter yourself, so you can return your Beat Takeshi autographed frying pan to the cupboard. But Killing Harmony is so crammed with intrigue and so utterly, utterly bonkers that you really won’t care that you can’t get your hands dirty.

Instead, you’re primarily tasked with investigating the school, with the dual objectives of discovering a means of escape from this dayglo hellhole and gathering enough evidence to expose the latest murderer. Yes, it’s point-and-click time, but to its credit, Killing Harmony takes the grind out of investigating by utilising two simple mechanics. Firstly, the game won’t let you leave a room until you’ve investigated the relevant nooks or engaged in certain conversations. Secondly, and this is an immensely useful feature, holding down a button on your joypad will highlight the areas you can interact with, removing the need to sweep your cursor around the screen. 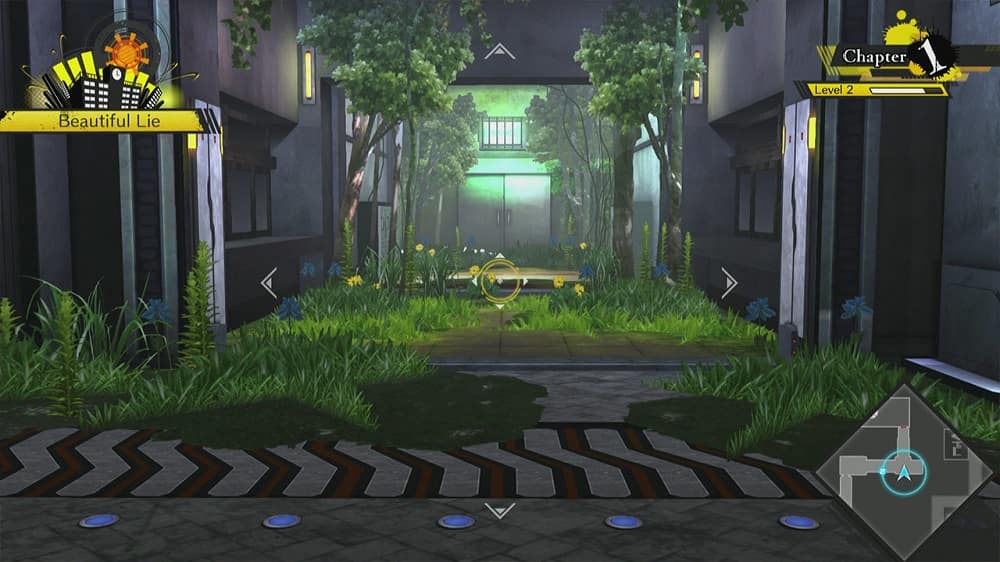 Chipping away at the truth, or one version of it, is a big draw, but Killing Harmony really comes into its own when you advance to the class trials. These ludicrously hyperactive and ridiculously entertaining sections require you to point out contradictions and engage in a number of odd mini-games in order to underline your deductions. They’re also against the clock, which, coupled with the game’s upbeat soundtrack and relentless visual assault, ensure that the tension level rarely drops. Failure is an option in class trials but Killing Harmony is fairly forgiving, allowing you to continue without losing much progress. However, the fact that you’re dealing with up to fifteen simultaneous testimonies means you’ve got to actually think and can’t just spam each possible response.

There’s a glaring contrast between the game’s subject matter and its gaudy, gloriously deranged presentation, which sees your investigative efforts frequently interrupted by Monokuma and his robotic progeny. But Killing Harmony’s over-the-top tone works in its favour, making the execution scenes all the more harrowing. One minute you’re smiling at the sight of teddy bears roaming around in robotic exo-suits, the next you’re watching in horror as one of your classmates is executed in a stylishly animated yet utterly brutal manner.

While the game borrows heavily from Phoenix Wright: Ace Attorney, it doesn’t share that title’s penchant for moustache-twirling, breathlessly evil baddies. Killing Harmony’s criminals are the same classmates you’ve spent the last few hours getting to know, and their motives are often entirely understandable. They may have dispatched another student, but your glee at having proven their guilt and navigated the trials’ many twists and turns may be soured when they explain their reasoning. 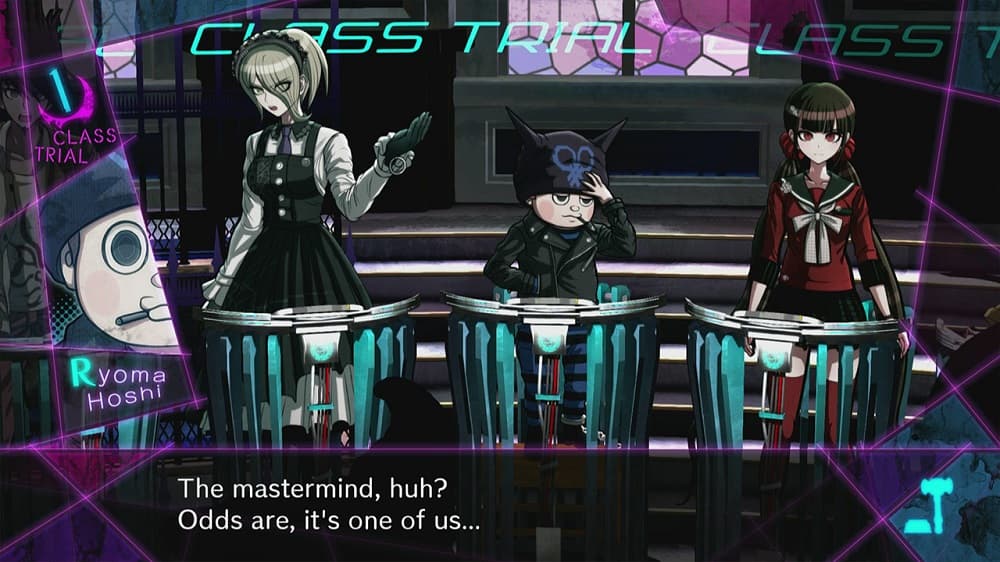 Killing Harmony’s narrative is undeniably convoluted and requires you to suspend your disbelief on numerous occasions, but despite its absurdity, is is utterly compelling. Your classmates are a quirky bunch but Spike Chunsoft have, with a one or two exceptions, avoided rolling out the usual anime cliches. You’ll grow so attached to your comrades and their idiosyncrasies that losing even one of them will be a real hammer blow.

There are moments when Killing Harmony stumbles, with some of the investigation sections going on a little too long. Anticipation turns to irritation as you wonder just when you’re going to get to deliver a semi-legal smack down, conveniently forgetting how badly the last courtroom tussle went for all involved. But for the most part, the game maintains its pace and keeps you hooked until – multiple twists and several unforeseen fatalities later – you hit Killing Harmony‘s shocking final act.

Despite its garish, over-the-top veneer, Danganropa V3: Killing Harmony is an emotional, involving, brilliant game that will yank out your heart and run it over with its brightly coloured tricycle.