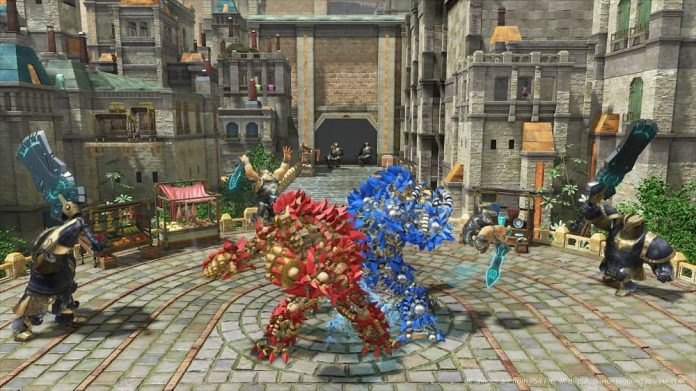 A launch title for the PlayStation 4, I quite enjoyed Knack.

It wasn’t a sentiment shared by many. While technically quite impressive, its art style was admittedly bland and the gameplay an acquired taste. Despite its lukewarm reception, however, somehow a sequel was greenlit. And so here we are with Knack 2, a game that addresses some of its predecessor’s problems while not feeling that far removed from it at all.

Knack 2 reunites us with the equally lovable and ugly Knack and his woefully forgettable human friends, once again saving the world from goblins. For the most part, little has changed – it’s still a linear platforming adventure game with lite God of War-style combat and a passable plot – but this time there’s a little more depth and variety to the gameplay. 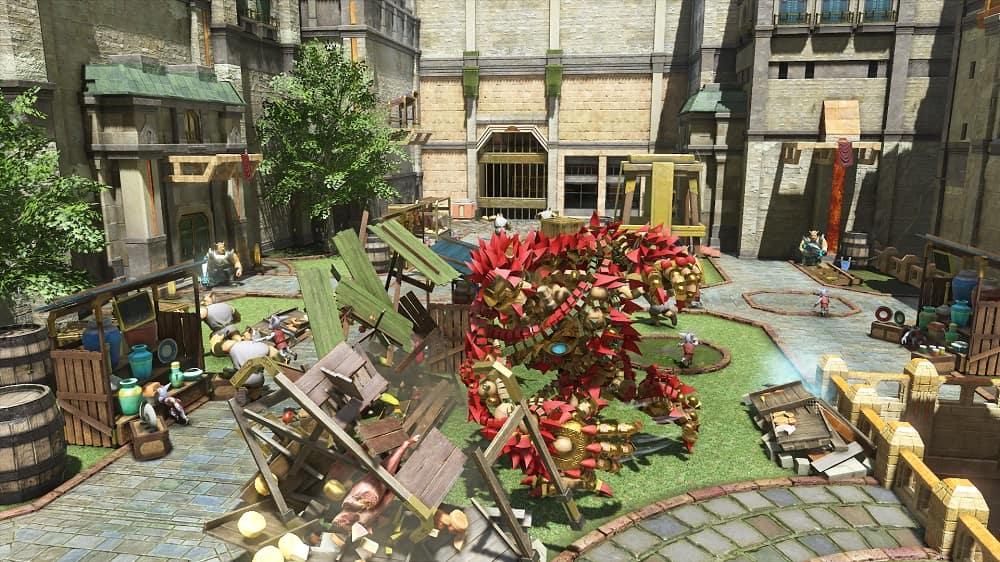 The introduction of skill trees is perhaps the biggest change. While playing Knack 2 you acquire orbs by defeating enemies and destroying specific containers, and once you’ve collected enough to fill a gauge in the bottom left-hand corner of the screen you gain a skill point. Unfortunately, you need to complete one skill tree before being able to move onto the next, which makes your development pretty linear, but it still affords you a little bit of freedom while drip-feeding you with new abilities and status upgrades.

Your dodge manoeuvre can be extended, for instance, and you can learn new moves like a fast punching technique reminiscent of E Honda’s one hundred hand slap from Street Fighter 2. It brings a bit of variety to the combat, making it much more interesting and rewarding than that of the original Knack, though the sheer volume of it means that, eventually, boredom still does set in.

Knack 2 is one of those games that just feels too big for its own good. A single playthrough on normal difficulty is likely to take you about 10 hours, but you’ve pretty much seen everything the game has to offer after about two hours of play. Every level is the same: you run around beating up bad guys, switch between the large and small variations of Knack to negotiate tedious platforming sections, and grin and bear some uninteresting quick time events. You may gain some new skills along the way, but they never add any real excitement to the gameplay. 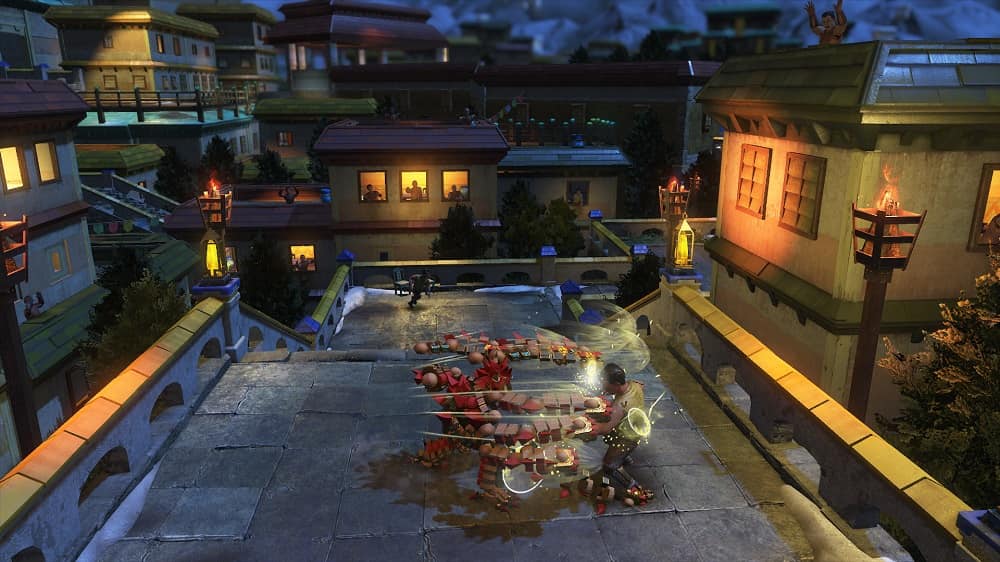 Meticulous players may eke some fun out of Knack 2 by doggedly searching for the secret areas that are well-hidden within levels, but like in the first game, it becomes a bit of a slog. Your efforts are rewarded with either pieces of gadgets or precious gems, and while gadgets are fairly easy to complete, finding enough gems to unlock alternative Knack variations will take multiple playthroughs. At least this time there’s more incentive to go back and play through the game more than once though, thanks to a handy world map that makes jumping into previously completed levels a doddle, and a huge number of challenges to complete to unlock some extras.

One area where Knack 2 has been dramatically improved for the better is in its implementation of co-op gameplay. It still allows for a second player to drop in and out at their leisure, which is good, but this time both players get to control their very own fully-featured Knack. With player one taking control of a red Knack and player two taking control of his blue brother, cutscenes and QTEs see them joining together as one which is rather a strange sight to behold, but it does allow for some couch co-op fun. The camera can be a pain at times when playing in co-op though – it’ll randomly choose which character to follow and warp the other player to them if they stray too far away, or sometimes just obscure an important ledge as it tries to keep you both on screen. 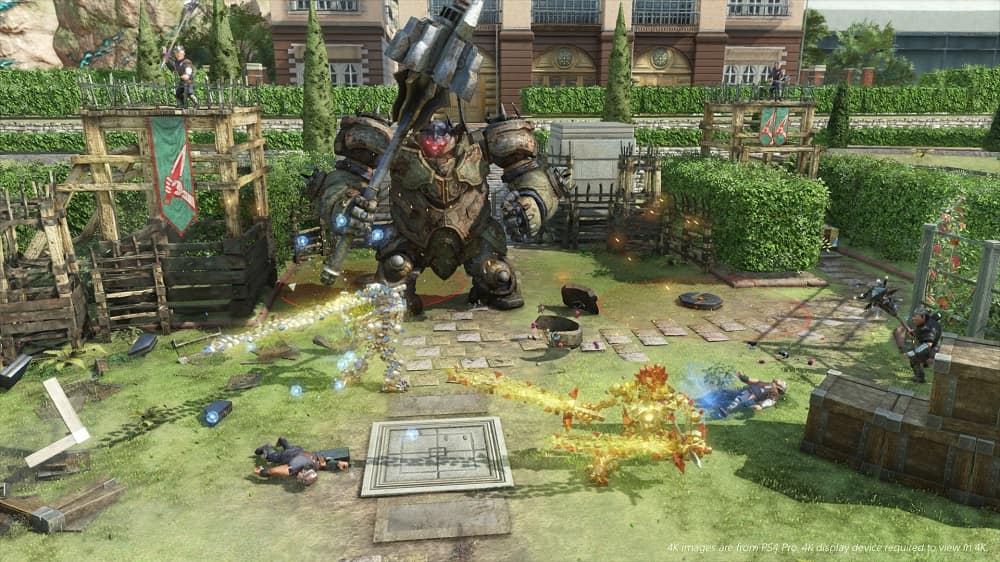 As a sequel, Knack 2 achieves what it set out to do: right some wrongs and be a better game than its predecessor. The fact of the matter is though, it’s still nothing special. Knack himself is a unique fellow – and rather likeable in his mute, small form – but the story, world and supporting characters that surround him are just dull as dishwater. The gameplay, too, is rather stale. There’s just nothing here that grabs you. The platforming is merely serviceable, and the combat is scrappy, repetitive, and at times, irritatingly unbalanced.

As a launch title, Knack was okay. It was a good display of the power of the PlayStation 4 for anyone that had the determination to sit through it. Nearly four years later, however, Knack 2 just doesn’t do enough to make its existence worthwhile. It can no longer get by as a technical showcase, and the gameplay hasn’t been improved enough to make it stand out out amongst other, more accomplished platformers. You might just have some fun playing Knack 2, but at the back of your mind there’ll always be a sense of déjà vu alongside the incredulous thought that a sequel to Knack actually exists.

Knack 2 is available on PlayStation 4.