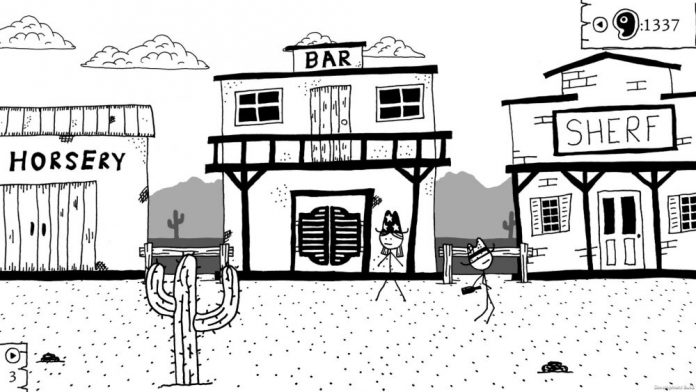 I wouldn’t have thought one of the most enjoyable games I’ve played this year would feature line drawings and stick men, but here we are.

West of Loathing is a simplistic 2D adventure RPG, telling the story of a young farm girl “heading west” in search of a better life. It’s brilliantly funny, and has some of the best comedy writing I’ve seen in a game in a long time. It’s also completely black and white, and the most complicated character model in the game is a stick-man skeleton.

It’s this overly basic style that makes West of Loathing work so well, though. When it’s stripped of any awe-inspiring graphics, a game has to rely purely on engaging gameplay and writing to be enjoyable – and boy, does this deliver. It only takes a few seconds with the game for its incredibly intelligent wit to shine through. Developer Asymmetric has managed to cram some kind of comedy into almost every line, yet it never feels forced or over the top. 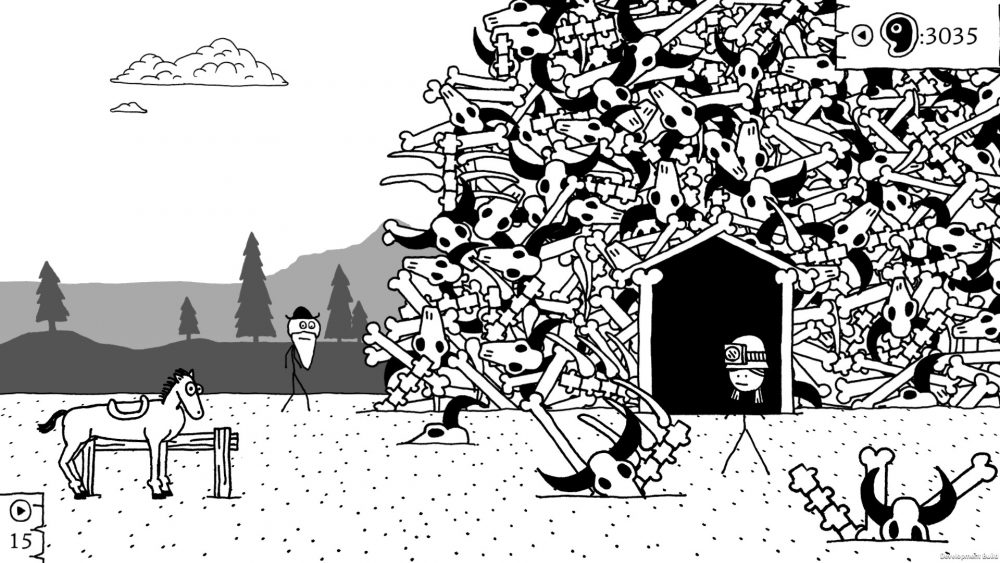 And actually, its stick figure art style isn’t to West of Loathing‘s detriment, either. It’s very charming – on paper, a game made up of nothing but hand-drawn black and white stick figures may sound like a recipe for disaster, but in action, it’s executed with such style that it just works. Somehow, the stick figures ooze character, and although fairly limited in variety, the locations are quirky and inviting to explore. I’d really like to see more games try to achieve something similar.

In terms of gameplay, West of Loathing is very typical of an adventure-RPG. Well, kind of. It toes a fine line of being a genuine RPG and being a parody of one. It balances this carefully, never being condescending or derisive; rather, it’s an ode to the RPG games that have come before it. There are plenty of quips in there, ragging on overused tropes of the genre, and there are lots of little nods that any avid gamer will get a kick out of. There’s even film and music references in there. Hell, even 80s band The Bangles gets a poke. Nothing is safe, and that’s just one of the many things I love about this game.

West of Loathing is, in a sense, open world. There are main story missions to complete, but along the way you’ll pick up a wealth of side quests, all that involve you visiting new places, collecting items and completing tasks. There’s a lot of turn-based combat thrown in too. As you play, you’ll learn new skills and find new weapons and equipment to make yourself more powerful, as well as gaining XP that can be spent on levelling up certain skills. The combat is never particularly taxing, but that certainly doesn’t stop it from being fun. Constantly finding new ways to best your enemies – sometimes even without combat, should your intimidation skills be up to scratch, for example – keeps the fights feeling fresh, and their simplicity means it’s always fast-paced and enjoyable. 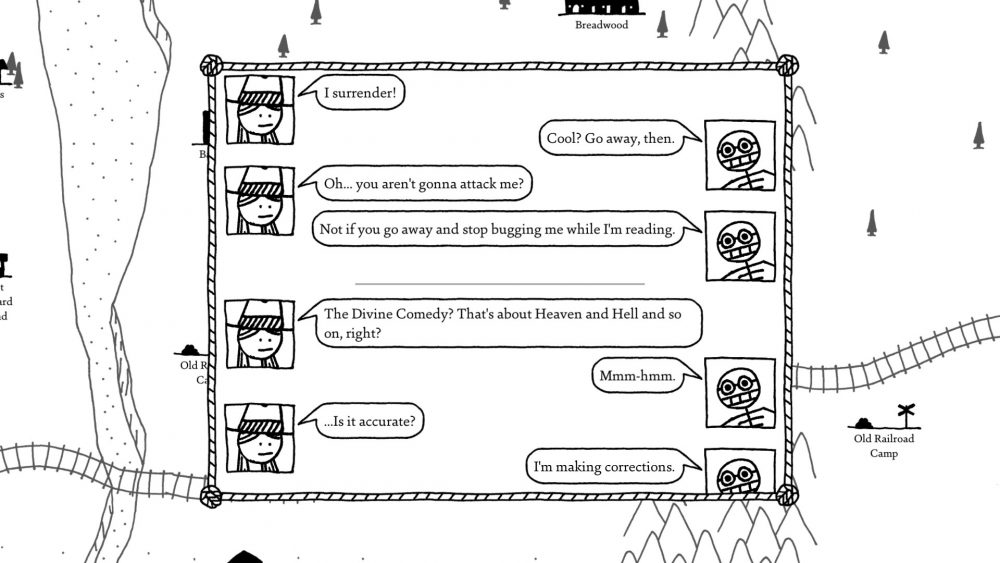 The missions themselves can get a little repetitive, but that’s the nature of the game – and all the games that West of Loathing is playfully aping. You’ll spent a lot of time darting backwards and forwards on the map, but as you do, you’ll keep on discovering new locations (and in turn, even more missions and quests to complete). There are a lot of fetch-type quests, and while most are fairly straightforward, a few actual brainteasing puzzles have been thrown into the mix to keep you on your toes.

But regardless of how repetitive you find the tasks that West of Loathing throws at you, its the game’s constant quick wit that will keep you hooked. It doesn’t matter that you’ve had to return to the main town half a dozen times to pick up new quests, because every time you do there’s a new dialogue exchange, and something new to make you chuckle. And make you chuckle it will. I can’t overstate just how well-written every line of dialogue is. With no voice acting in the game everything is text-based, which means there’s a lot of reading to be done, but when it’s this funny it really isn’t a problem.

When something like West of Loathing comes along – something completely unique and ‘out there’ in its style – it can go one of two ways. It’s either a complete disaster, or it’s a true gem among the rough. Asymmetric’s wonderful little game definitely falls into the latter category here. Their gamble to make a stick figure-led game has paid off massively. From the charm that oozes out of the hand drawn simple animations to the writing that is absolutely on point from start to finish, West of Loathing really is something quite special.

West of Loathing is available on PC. 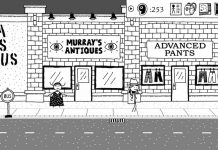