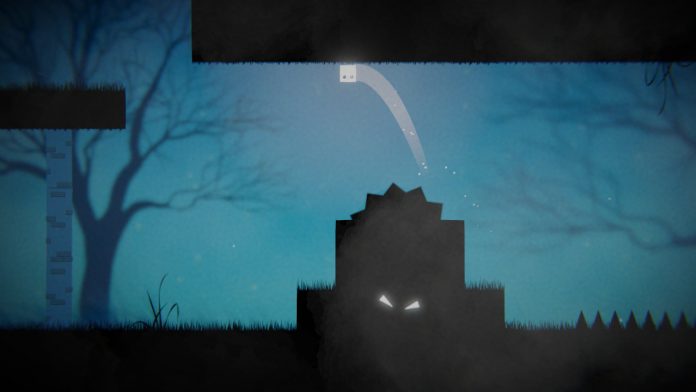 Upon booting up 36 Fragments of Midnight, I was initially quite pleased with what the game appeared to offer.

I was greeted by a charming silhouette art style reminiscent of Limbo and the like, some soothing piano music at the title screen, and a cute little protagonist in the form of a luminescent box with eyes. Unfortunately, it didn’t take long at all for my intrigue to transform into disappointed disinterest.

And then I beat the game in around five minutes. With no replay value, all I can do is play the game again.

Each attempt at completing this bite-sized game begins the same way: on-screen text prompts the player to locate and collect 36 star fragments that are scattered throughout the procedurally-generated game world before returning to the starting point. Hampering the progress of Midnight, the aforementioned luminescent box with eyes, are the standard obstacles found in most platformers these days – spikes, lasers, moving saws, and the like. Starting fresh scrambles the game world in a manner that initially seems promising, but before long I noticed similar patterns in the appearance of map sections. The areas surrounding each star fragment aren’t even randomly generated at all, so even if adjacent sections of the game world are different, the process of obtaining each fragment remains the same. It all adds up to equal some boring and repetitive platforming. Midnight’s platforming repertoire is also quite limited, forcing the player to make due with only movement, single jumps, and double jumps. That being said, what the player can do feels good, with movement and jumping feeling snappy and responsive.

To collect all 36 fragments, you won’t only be moving horizontally to different map sections, but also vertically. Herein lies another issue with 36 Fragments of Midnight’s design: moving to a new map from the top or bottom of the screen is a jarring process, and no insight is given to the type of platform you’ll next come into contact with. It could be safe, or it could be spikes – you don’t know until the map moves, and by then it’s too late to do anything about it. I also soon realised that the enjoyable piano music from the title screen was only present in one other location – the game over screen. While actually searching for star fragments, the only sound effects you’re likely to hear are the sounds of wind blowing with the occasional sprinkle of noises resembling chimes. It leaves the game world feeling vapid and empty.

Given that 36 Fragments of Midnight can be completed in as short as five minutes or so and that every subsequent playthrough is just doing the same thing over again, there really isn’t anything justifying the price of admission. Everything here (which isn’t much) suggests that you go elsewhere to get your platforming fix.