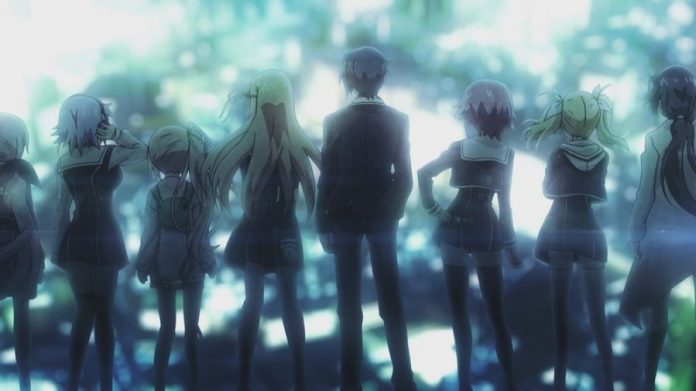 Chaos;Child has a complex, compelling story to tell but keeps stopping to remind you what it had for dinner.

Chaos;Child is not an easy game to like. There were times, particularly during the game’s first few hours, that I wished I’d received a physical rather than digital copy of the game, just so I could hurl it out of the window. This visual novel, centred around a serious of mysterious murders, disregards the cardinal rule of “show, not tell”.  Instead, it subjects you to protagonist Takura Miyashiro’s endless and overly verbose internal monologues, assuming that you’ll be absolutely riveted by what he has to say. As a result, the plot moves forward at such a slow pace that frustration and boredom set in.

The game’s problematic pace is particularly evident when you watch the (much shorter) animated series of Chaos;Child. It takes the show a single line of dialogue to establish that a character spends the bulk of her time playing an online game and that she becomes frustrated when she loses. The game, on the other hand, allocates five minutes of back-and-forth to driving this one point home, a point that’s barely relevant since the character’s role in the game is so minimal.

That’s not to say that Takura or his fellow high school students are an uninteresting lot. It’s easy to dismiss them as stereotypes but as the game progresses they grow beyond their perceived roles. I felt thoroughly ashamed for writing female student Nono off, based on the fact that she’d managed to curry favour with the whole school. Instead, she’s revealed to have real depth and shares a history with Takura that makes her one of the few characters you can rely on. So much so that you’ll wish that she, rather than Takura, was the protagonist.

Chaos;Child does pick up when you hit the five hour mark. It remains a relatively non-interactive experience, being a visual novel in the truest sense, and the pacing issues never really go away. But the game’s pleasingly convoluted plot starts to draw you in, Takura shifting from the role of protagonist to potential victim. The murders that he has been investigating, as president of his school’s newspaper club, take on a disturbing and potentially supernatural twist.

Suddenly Chaos;Child is more Saw than Scooby Doo as Takura starts to question just who he can trust and who is potentially a part of the game’s unfolding machinations. Yet he continues to subject you to his views on anything and everything, slowing the game down to the point where you’ll wish there was an option to skip his internal monologue entirely. But you do discover more about his past and start to gain an understanding of the traumas he’s been subjected to.

Takura’s flawed nature is further borne out by the game’s delusion system. Your role in Chaos;Child is largely to click on the “advance dialogue” button, but you’ll periodically be given the option to watch Takura’s delusions, little vignettes that offer his skewed, fictional, perspective on a particular situation. These range from the overtly sexual to the downright disturbing or, in some cases, both. I did a double take when one supposedly “positive” delusion showed me Takura spiking his female friend’s drink. The fact that his friends are totally unaware of his delusions makes them all the more chilling. 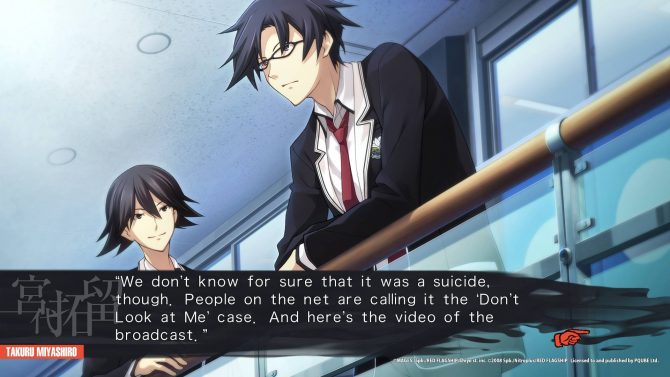 Equally chilling is the art style used during the game’s more gruesome moments. Chaos;Child opens with a brilliantly brutal scene which sees a live streamer cutting “cheese”, blissfully unaware that he’s hacking into his own arm, leaving him slumped over his computer, his contorted face gazing into the camera. Yet moments later the game switches from the realistic style used in this scene to a more conventional anime-style aesthetic. Witnessing that scene, then being greeted by a character who has eyes as big as dishpans, is a rather jarring experience.

There’s nothing fundamentally wrong with Chaos;Child being a pure visual novel, rather than an investigation game such as as Ace Attorney or Danganronpa. However, the lack of any distractions make you acutely aware of that you’re getting seven hours worth of plot padded out to thirty hours of playtime by the addition of bloated dialogue or wholly extraneous scenes. More if you count the alternate endings, though you’ll need a superhuman amount of patience to plough through the game a second time.

In fact, if you’re at all lacking in patience then Chaos;Child isn’t the game for you. At its core, it’s a smart murder mystery with a cast of engaging, sympathetic characters, enough shocking, unpredictable twists and a story that will take you to some very dark places. But tackling the game can be like wading through treacle; almost as if the game doesn’t trust you to “get” it unless it explains everything in explicit, unnecessary, faintly patronising detail. Ultimately, if you’re already a fan of lengthy visual novels then Chaos;Child is worth investigating but if not, this isn’t the game to introduce you to the genre.

Chaos;Child is available on PS4 and Vita. We reviewed the PS4 version.