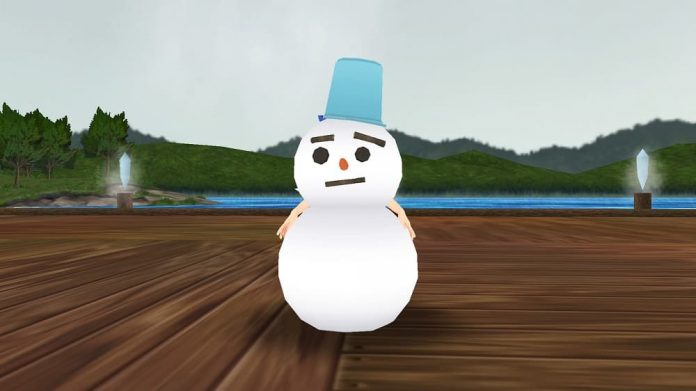 When you find yourself asking, “is this game a joke?” within minutes of booting it up, you know there’s something wrong.

Though to be honest, in the case of Touhou Kabuto V: Burst Battle, a simpler question would be to ask what’s right with the game, and the answer would be pretty much nothing.

I thought there was something fishy when I set the game to download. Clocking in at less than 1GB, “that’s awfully small for a 3D fighting game priced at around £30”, I thought. The second warning sign was when I entered the game and found a text box on the main menu that was in Japanese; the important stuff was in English, sure, but sat right there on the left-hand side was a box full of Japanese text that I discovered takes you to a Japanese website. First impressions were not good then, but I was yet to experience the real disappointment of Touhou Kabuto V: Burst Battle – the actual gameplay.

Jumping straight into Story Mode, I was greeted with some admittedly nice artwork that served as a backdrop for the game’s dialogue, then, out of nowhere, I was in my first battle. My first instinct was to reel in horror at the game’s visuals – to call them PS2 quality may be flattering. In fact, I quickly had my colleague check that this was indeed a new game and not some sort of remaster or re-release. It really is a new game released in 2017, but boy, you’d never think that by looking at it.

But, you should never judge a book by its cover. Touhou Kabuto V: Burst Battle may have looked like a game that was 15 years out of its depth, but that didn’t necessarily mean it wouldn’t be fun to play. It was good thought while it lasted, as after only a few minutes I had ascertained that the game really did play as bad as it looked. Touhou Kabuto V: Burst Battle is a fighting/shooter hybrid, where characters do battle with a variety of ranged projectile attacks and both their fists and feet in small arenas. You can jump and dash to avoid attacks and manoeuvre around your opponent and use standard, charged and special attacks to deal damage to them. It’s something that can work well when pulled off correctly – Senko no Ronde is proof of that – but here, it’s about as far away from fun as you can get.

Character animation is kept to a minimum, so much so that sometimes characters look like they’re gliding over the floor as they attack. The game’s camera is useless, often failing to give you anything that resembles a decent view of the action. Hit detection is woeful, leaving you never quite sure if your attacks are hitting the enemy or if theirs are hitting you. And mechanic-wise, the game has no real feel or nuance to it. It’s sterile, incomplete and just broken. It’s not entertaining to play even in the slightest. If you somehow find some fun in Touhou Kabuto V: Burst Battle’s abysmal gameplay, though I don’t know how, you’ll find that there are plenty of modes for you to tackle; story, arcade, score attack, vs online and more. There are also eight fighters to get to grips with, each as basic and badly animated as the last. Honestly though, I can’t stress this enough: you really shouldn’t be tempted.

It’s been a while since I’ve played anything quite as bad as Touhou Kabuto V: Burst Battle. A title with no redeeming features whatsoever, please, for the love of god, spend your money elsewhere if you’re even considering picking this up.