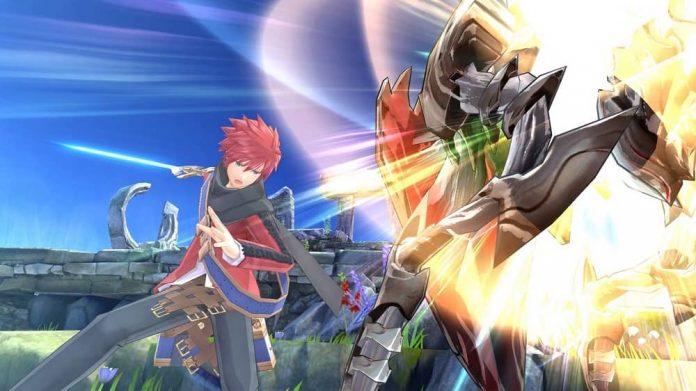 Not everyone may be familiar with the Summon Night games, which is a real shame.

The strategy RPG series has historically been more than niche here in the west with only a handful of games being released in English. Gaijinworks, the localisation team run by former Working Designs head Victor Ireland, had localised Summon Night 5 back in 2015 and quickly got to work on its sequel, Summon Night 6. After unfortunate delays, the most recent mainline Summon Night game has finally arrived. While the release comes over a year-and-a-half after the original Japanese release, there is enough heart, whimsy, and charm to make it as fresh as any of its contemporaries.

For a series that’s been around as long as Summon Night, it can seem a bit intimidating jumping head first into the latest release. Summon Night 6 handles that predicament by setting the game in the new world of Fillujah, a place where everyone is accompanied by their own flying companions and objects fall from the sky. Following three new main characters in Raj, Amu, and Ist, the game introduces enough new lore that forces the learning curve to bend for both new and returning players alike.

However, as you take control of new characters, the rest of Summon Night 6’s cast feels like a who’s who of series regulars as they literally fall from the sky throughout your adventure. Sometimes the fanservice is charming with returning favourites interacting with one another like some sort of series-wide celebration. Yet, the game’s pace can make it feel a bit overwhelming for the unfamiliar. 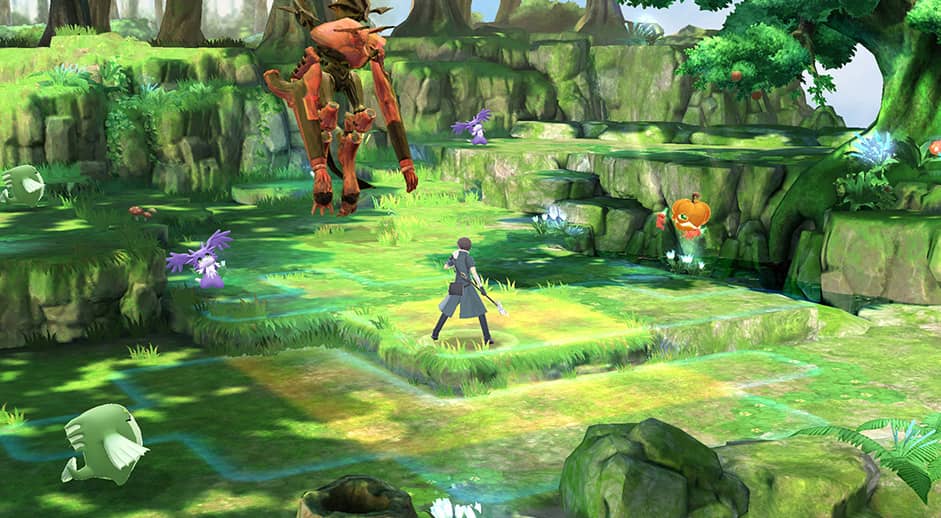 The premise sets up an interesting character study for the three main characters, all of whom have existed their entire lives in isolation outside of their friendly floating companions. As they begin meeting Summon Night’s other returning characters, each act and behave in interesting ways. However, the game leaves most of the more interesting character exploration for its “night conversations”, a series staple where main characters can choose to have a more intimate one-on-one conversation with other characters. Doing so will add affection points, which makes the night conversations feel even more impactful than many of the game’s other path-altering decisions.

In fact, most of Summon Night 6’s overarching elements fall short in comparison to the smaller, more touching moments between two characters. Never stepping into uncomfortable territory, Summon Night strikes that rare balance between overtly childish and objectively inappropriate that most games outside of Nintendo’s house seem to miss. While occasionally its tone can make light of more serious events in the story, its brevity and sense of charm is refreshingly heartwarming.

It is hard to ignore, however, that for all its emotional interactions, a large part of the Summon Night experience involves slogging your way through mountains of dialogue. Presented in the series familiar visual novel-like style, it’s disappointing that Summon Night 6 doesn’t take advantage of current generation hardware. While it may be just a minor annoyance most of the time, depending on how long you spend your time in the world of Fillujah, it can quickly become an exercise in patience.

Luckily, the game does allow you to skip past dialogue portions should you find yourself itching to get back to the action, but of course doing so means you may miss out on important portions of the story. Since Summon Night is known for its multiple branching pathways, this latest instalment boasting over a dozen possible routes to take, skipping even the most mundane conversations can come back to bite you. 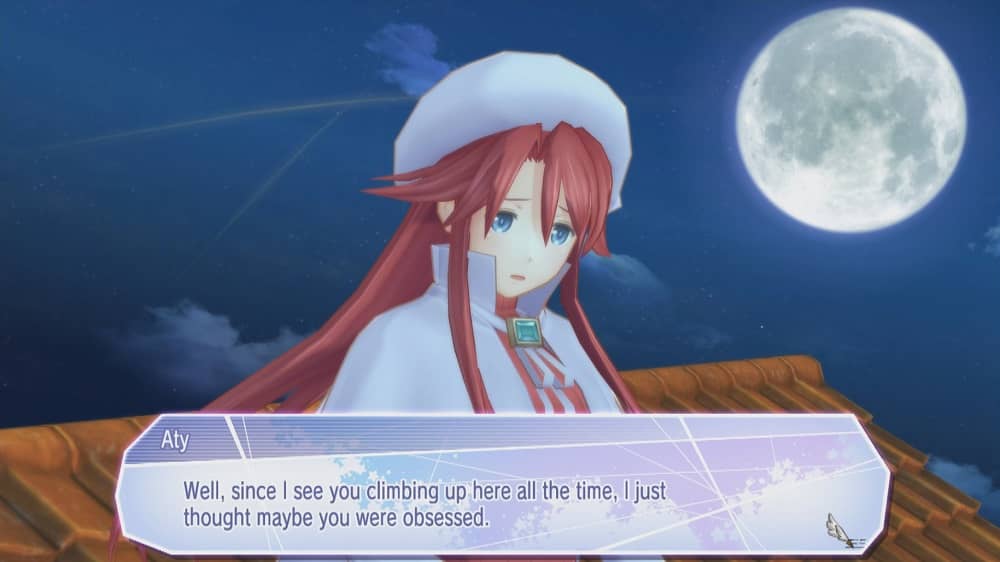 When not conversing with one of the game’s numerous characters, progression through Summon Night 6 can feel a bit dated. With different events spread out onto the overworld map, you can choose between side and main events to progress the story. Some events are simply having conversations in particular locales while others have you facing off against a number of enemies. While the beginning hours of the game may feel like there is quite a bit of hand-holding, the game eventually opens up allowing you to craft new items and weapons, fight enemies off the beaten path, and explore more of the world. It’s unfortunate, however, that traversal in Summon Night 6 is restricted to pointing the cursor to a different part of the map, making most of the game feel more distant as a result.

Of course, Summon Night is also known for its turn-based strategy combat system, which is back and as impressive as ever. Taking turns, players manoeuvre characters around 3D arenas like pieces on a chess board. Anyone familiar with strategy RPGs will know what to expect, for the most part. Movement doesn’t take up a turn and attacks can usually be countered by both your characters and their enemies. Characters can also team-up for chain-attack combos if they’re positioned correctly, letting you double down on damaging your foes.

Summon Night‘s staple summoning mechanic also makes a return, which allows you to call various creatures to your aid for attack and support purposes. With a bestiary as long as any pokedex, Summon Night 6 has tons of variety in its wacky summons. Pulling from the entire franchise’s history using both new and returning creatures alike, it’s unfortunate that the game doesn’t put more of an emphasis on collecting them aside from showing you a long list of ones you still have yet to find. 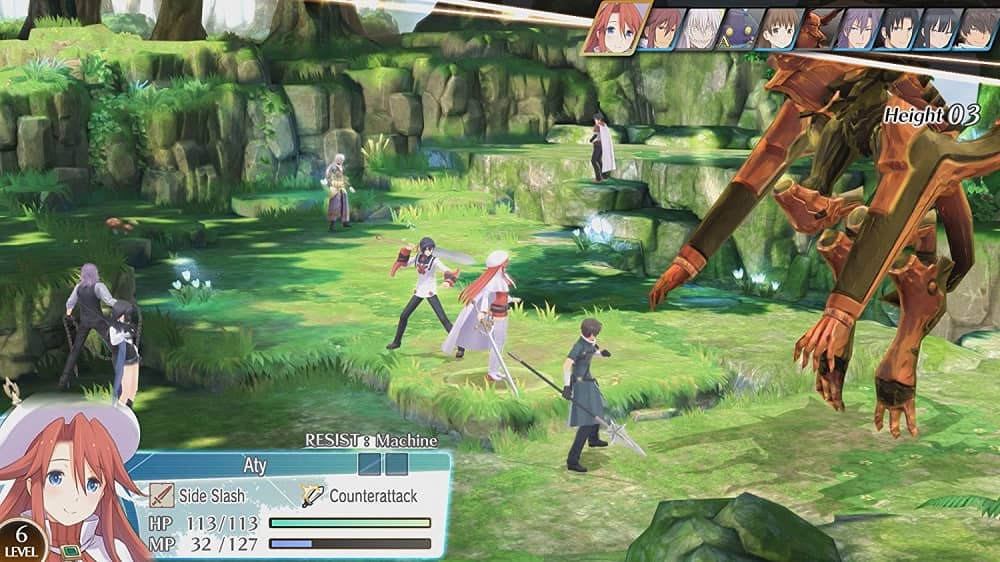 Like any strategy RPG, fights in Summon Night 6 can often become long, drawn out affairs. Be prepared to sink a lot of time into fighting enemies, most especially some of the harder bosses in the game. Although the game’s large list of characters can make total defeats more rare, each fight usually has particular success and failure parameters that can add another layer of complexity to each battle.

That said, while fights may at times be tough, the game always offers you the proper tools for each encounter. You can view how much damage you’ll perform before you attack, the percentage chance of a successful counter-attack, and so on. When failure comes, which hopefully isn’t that often, you’ll know that it’s on you, not the game. It turns defeat into a teachable experience forcing you to rethink your strategy for the next time. Never gratuitously difficult like so many other games these days, it understands the meaning of difficulty and uses it accordingly.

Although the franchise’s original developers Flight Plan silently closed their doors back in 2010, the series has survived by being passed along from developer to developer throughout the years. You’d expect a series would falter and crumble under those conditions, instead it seems quite the opposite. As Media.Vision’s first crack at the series, Summon Night 6 is a surprisingly solid entry in the series. While we were unable to get our hands on any of the physical packaging that Gaijinworks is known for, their localisation efforts shine through clearly. While strategy RPGs may be harder to come by these days, Summon Night 6 is a thirst quenching oasis for any genre-loving desert travellers.