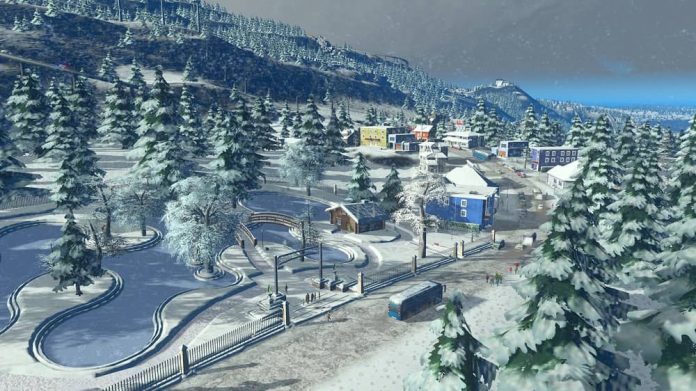 Winter is coming. Not because Ned Stark couldn’t keep his stupid mouth shut but because I’ve grossly underestimated my city’s power needs.

In fact, having tackled Cities: Skylines‘ latest piece of downloadable content, I honestly think the headless corpse of Sean Bean could have better handled the situation. Snowfall, despite sounding like an Adele song, adds several new features to the city-building sim. A few of these features are obviously winter-related, while others are just useful additions.

The most significant change, the one that nearly brought doom to my beleaguered metropolis, is that as the temperature drops, your citizens’ electricity use will increase. Sadly, there’s no option to go to door-to-door, screaming, “Don’t touch that thermostat!” in their faces, which leaves you with one of two options. Either ensure you’ve built enough power stations to cope with the the increased demand, or set up your own city-wide heating system. But as appealing as the latter option is, it’s not cheap. Cities: Skylines often puts you in the uncomfortable position of having to jettison your ethics in favour of economic wellbeing and if anything, Snowfall makes you even more likely to throw your principles to the icy winds.

Should you be fool enough to tackle Jack Frost head on, Snowfall offers a number of starting locations that are already frozen over. My foray into building a frosty metropolis didn’t end too well, though if you’re a veteran Cities: Skylines fan looking for a challenge, these sub-zero scenarios fit the bill nicely.

Despite its icy moniker, Snowfall doesn’t force you to engage with its new weather systems (which also includes rain and fog, though those are also available through a free update). I spent a couple of hours joyfully messing about with the DLC’s other additions, most notably trams, though my citizens were doggedly insistent on still requiring roads; don’t these philistines know it’s the Space Year 2017? Other features include new parks and new landmark buildings.

Snowfall doesn’t radically alter the way Cities: Skylines plays, but it sports a range of tweaks, features and extras  that make the game a more enjoyable experience. If you’re just getting started with the game you might want to wait until you’ve got a handle on the main game before letting this DLC throw a snowy spanner into the works. If, however, you’re feel you’ve exhausted all Cities: Skylines has to offer then Snowfall may breathe a little more life into the game.