I don’t know about you, but when I buy an expensive piece of hardware I like to try and keep it safe.

In the case of something that needs to be plugged into a power outlet like a TV or games console, that means plugging it into a surge protector, because…. well, it just seems like the sensible thing to do. You wouldn’t want a power cut or lightning storm to destroy hundreds of pounds worth of equipment, would you? It turns out, however, that in the case of an Xbox One S or Xbox One X, you shouldn’t.

Did you know that your Xbox One is designed to be plugged directly into a wall outlet? Check out our console power guide here: https://t.co/lGymrPOQEV

The Xbox Support twitter account revealed that the Xbox One is in fact designed to be plugged directly into a wall outlet, with the official Xbox support pages providing more light on the matter. Apparently both the Xbox One S and Xbox One X have built-in surge protectors, and as such, should not be connected to yet another surge protector. It may work totally fine if you do – hell, I’ve had my Xbox One S connected to a surge protector for over a year without any issues – but there is a chance that your console won’t be receiving all the power needed to fulfil its potential. 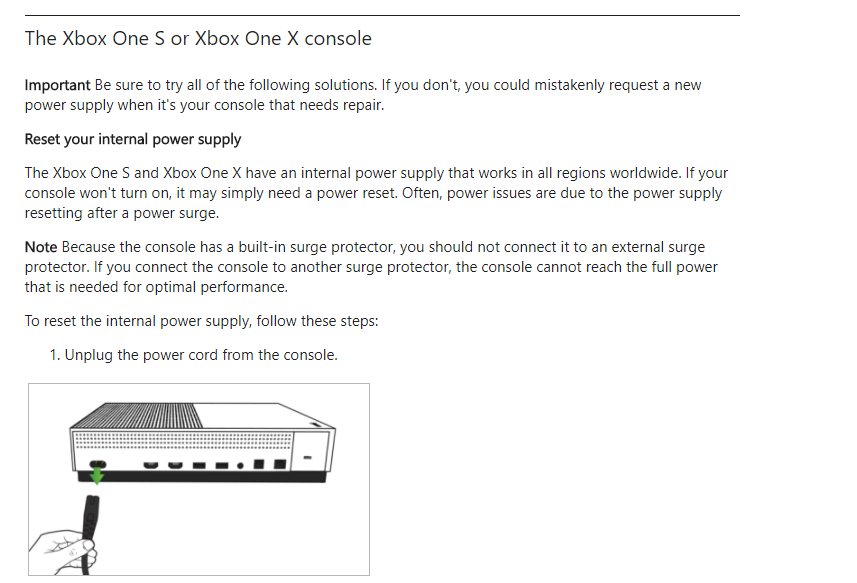 So, there you have it. By trying to protect our hardware we might have all been putting it in danger. Who’d have known? If you do have your Xbox One S or Xbox One X connected to a surge protector, you know what to do. Go and remove them, now.