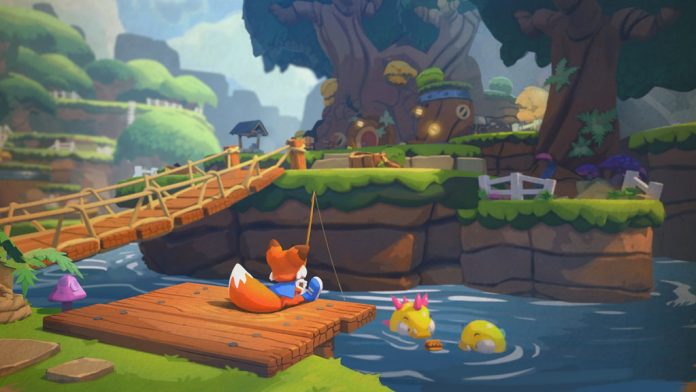 I’m not referring to those who have a duty of care to an individual, rather the fantasy variety who end up protecting the Sacred Stone of Thyyxyyxs. These thundering imbeciles are hoodwinked into stepping up to protect some ancient relic, dooming themselves to a life of misery and solitude. And if they do manage to breed before they’re slaughtered by some evil overlord, the duty of protecting the item in question is passed down to their children, crushing any dreams they may have had of living their own lives. All because their father never once thought of bricking up the Unholy Arch of Zantar.

Super Lucky’s Tale’s furry star has the unenviable misfortune of being related to just such a guardian. The titular Lucky’s life takes a turn for the worse when his globe-trotting sister discovers the fabled Book of Ages. Rather than sealing it in concrete and dropping it into the deepest part of the ocean, she decides the best course of action is to bring it home. Lucky is subsequently sucked into the worlds within the book, along with a gang of ne’er-do-wells who were trying to steal it. As Lucky, you must conquer these foes to stop them stealing the Book of Ages… from… within the book? No, it doesn’t make sense to me either and I’ve readily accepted that a mushroom-munching plumber can possess people with his hat. 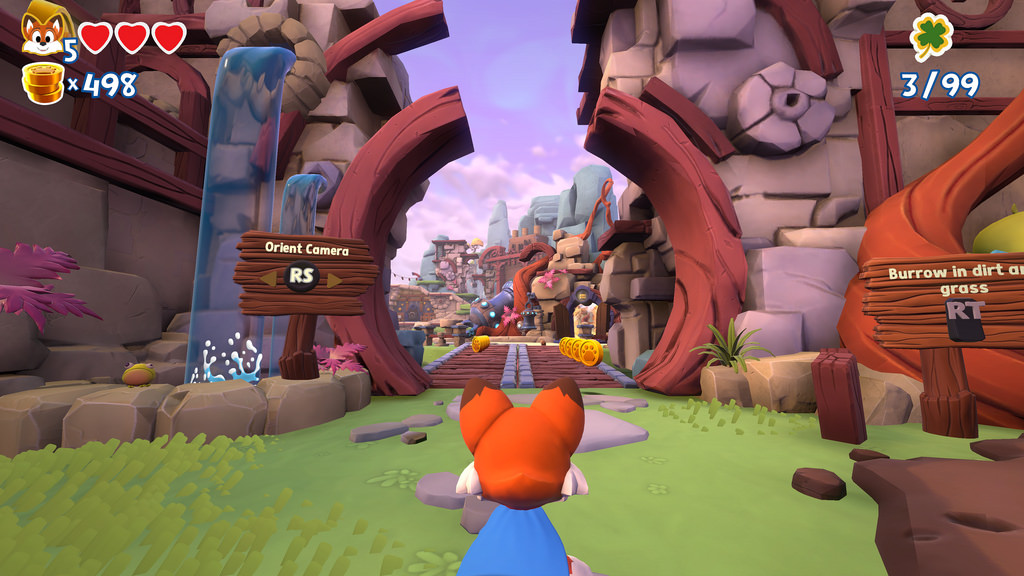 Cue a platform-hopping adventure starring one of the most appealing platform protagonists this side of the Kirby games. Lucky’s sunny outlook on life is apparently undiminished by his current predicament, his smile rarely waning even when you fail to make a jump and send him plummeting into the abyss. He also moves in the most adorable fashion, running around on all fours rather than walking upright and inflicting horrific damage upon his spinal column. Even without the graphical boost that the Xbox One X offers the game, Super Lucky’s Tale is a visual treat; each world is draped in colour, even the obligatory “spooky” level and each of the quirky characters, friend and foe alike, are smoothly animated. Super Lucky’s Tale’s respectable draw distance helps you appreciate the environmental features that adorn each level, such as malformed trees and strange stone faces.

Despite the game’s title, Lucky doesn’t have any actual superpowers, his moves being limited to jumping on his foes, slapping them with his tail, or diving underground. Land an attack and you can gracefully bound onto the head of another foe, then another; successfully chaining hits is remarkably satisfying. However the in-game camera does occasionally make it difficult to distinguish whether you’re on target or not. The game is generous with its lives system, but every so often you’ll die merely because of the camera’s foibles.

The game occasionally throws in a side-on 2D level to mix things up, but mostly you’ll be roaming around around 3D environments, flicking switches, leaping across platforms and leaping on enemies. And despite the camera problems, it’s fun — up to a point. Unlocking a new area becomes cause for celebration as you venture through each glowing portal. What oddities will you face? Robots? Moles? Robot moles? Cannon fodder aside, the game sports four boss fights which, while a little similar in style, are suitably taxing. Super Lucky’s Tale is hardly innovative but it is quirky and challenging enough to hold your interest. Until, that is, the game pulls the rug out from under you. 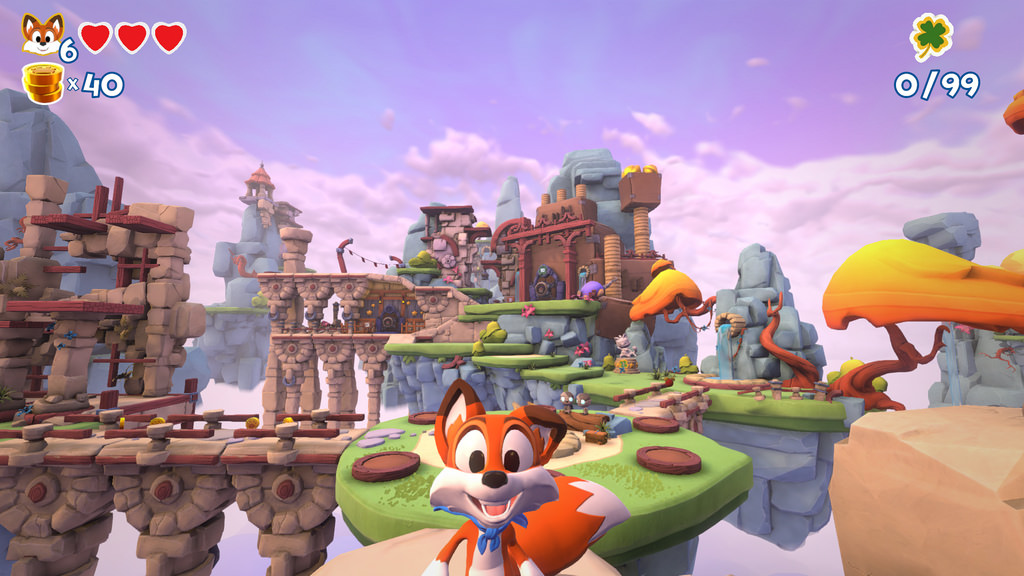 Super Lucky’s Tale isn’t a particularly large game; there are four worlds, with about eight shortish levels per world. However, the game’s designers have chosen to pad it out in a manner which will have you cursing every furry creature within a hundred miles. Most of Super Lucky’s Tale’s levels are locked and can only be opened when you’ve gathered the required number of lucky clovers. This isn’t a problem until about halfway through the second world whereupon you discover you’ve not got enough clovers to progress, each portal cruelly barred. You’re therefore forced to revisit levels you’ve already completed, farming clovers by emptying the level of golden coins or collecting the letters L, U, C, K and Y.

Many games offer rewards for replaying levels and uncovering the secrets therein but in most cases these rewards are strictly optional. That’s not the case here; at one point, I had to earn an additional ten clovers before Super Lucky’s Tale would allow me to proceed. And no matter how much you may have enjoyed bounding through Super Lucky’s Tale’s levels the first time around, revisiting them quickly becomes a tedious endeavour which sucks all the joy out of the game.

I can see why Microsoft put its faith in Super Lucky’s Tale, making it an Xbox One console exclusive and giving it Xbox One X support at launch. Its cast of oddball characters lends the game real charm and while it’s far from revolutionary, there’s definitely fun to be had here. But the game is so wilfully and bafflingly intent on blocking off said fun that you’ll need all the persistence of a bin-raiding fox to reap Super Lucky’s Tale’s rewards.

Super Lucky’s Tale is available on PC and Xbox One. We reviewed the Xbox One version.