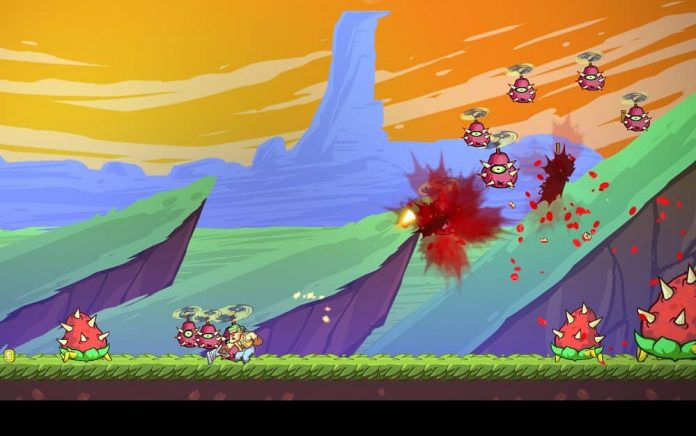 Its colourful presentation looks like the love child of Guacamelee and a higher-resolution version of Mutant Mudds. With no ammo restrictions or reloading, bullets are constantly flying and there is little reason to let up on the trigger until the last enemy falls. Metal Slug shines through as a heavy influence, and that alone had me intrigued. Unfortunately, I soon found myself losing interest.

You see, when the opening section ends, Greedy Guns shifts from shoot ‘em up style gameplay in favour of being a Metroidvania-style adventure, tasking the player with navigating through mostly linear corridors and combat instances as mercenaries on the lookout for alien artefacts. Enemies are reasonably varied and will, more often than not, catch you off guard if you run in guns blazing. For all that the game encourages fast-paced action, it also finds ways to reward careful precision. The ability to play two-player locally alleviates some of that demand for precision in favour of a bit more run-and-gun gameplay – just don’t expect a walk in the park. Movement feels tight, and responsive double jumping allows for quick evasion of enemy bullets. Considering that some battles take place in restricted spaces, this is absolutely necessary, and the game finds success in this respect. Unfortunately, it’s hard to offer aiming the same level of praise.

While fighting hordes of enemies in the air is satisfying because it doesn’t require overwhelming amounts of accuracy, fighting enemies on the ground is less of a treat. Regardless of whether you play as Bob or Kate, each of the two mercenaries practically hug the ground with their shortness. As such, aiming between horizontal eye-level and the ground is inconsistent and frustrating, made even more so by the lack of sensitivity in aiming. Mouse and keyboard player may feel differently, but for controller folk, the fact that aiming does not adjust from subtle taps on the control stick is unacceptable in a game that expects more precision from the player.

In order to get any sort of response, I had to push my right stick to the farthest point it can go in any one direction. Considering that shooting makes up the majority of the time spent – hell, the word “gun” is in the name of the game if that’s any indication – this comes across as a glaring oversight by developer Tio Atum. Those willing to look past this, however, will find enjoyment in Greedy Guns’ wide array of weapons. Shop terminals appear periodically throughout the game’s stages, allowing you to spend all the money you earn from exploding every alien who dared to cross your path. From the rail gun and grenade launcher to the unapologetically-named Contra gun, mixing and matching to fill each of the two weapon slots becomes essential in dealing with different waves of enemies.

Greedy Guns does little to advance the Metroidvania genre, though its shoot ‘em up instances and satisfying soundtrack are undoubtedly charming. It’s just such a shame that the aiming controls manage to feel so unresponsive at times, and those times are when precision is paramount. That being said, I’m sure that many fans of Metroidvanias will be willing to overlook this flaw and find some simple and flashy fun as they’re tearing through extraterrestrials on the hunt for fortune.