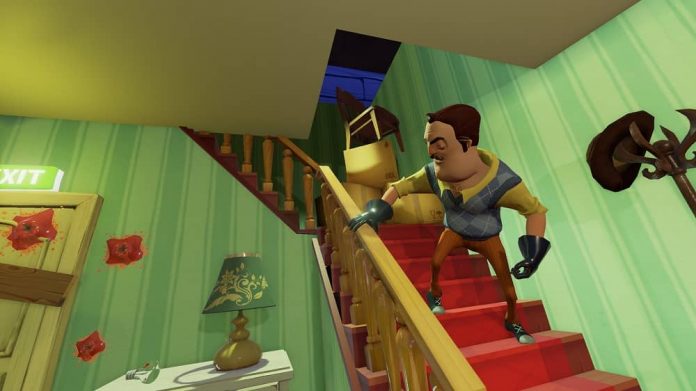 A game about sneaking into your creepy neighbour’s house to find out what nefarious crap he’s secretly up to? It’s a simple but solid plot. Couple that with lovely, cartoonish visuals and the promise that the AI learns from you, so every time he catches you he gets a little smarter, and it sounds like it could be something truly unique.

Demos and early builds of Hello Neighbor have been kicking around since last year, and a couple of members of the team checked it out — to fairly positive results. Unfortunately, the finished product — released last week — is something of a different story. 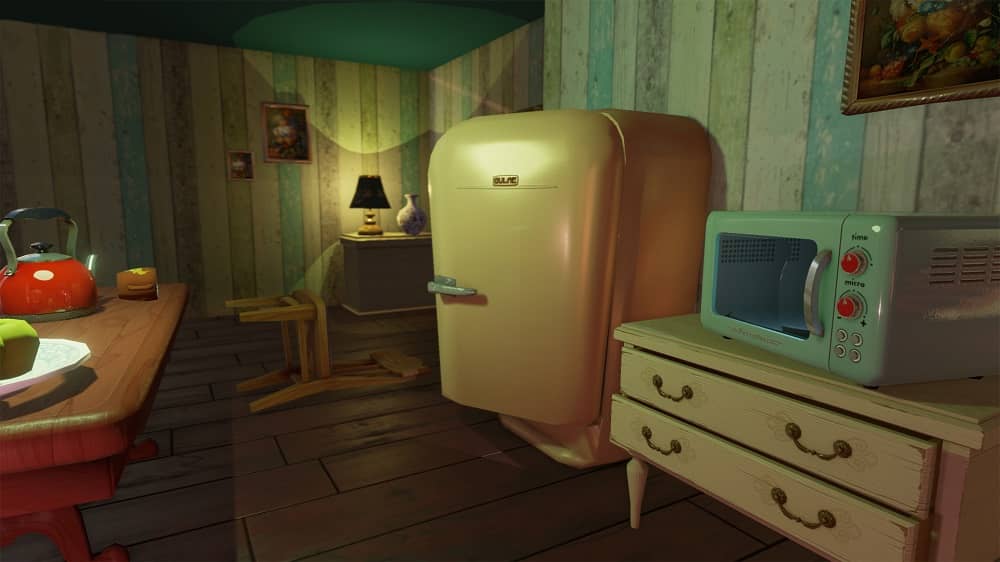 It only took a few minutes to realise that Hello Neighbor wasn’t quite what it was cracked up to be. Dropped into a first-person view on top of a street, the game gives absolutely no guidance as to where you need to go or what you need to do. It’s not too much of a problem initially — there are only two houses you can go in (your own, and your creepy neighbour’s) so you can’t exactly get lost. What you can do inside those houses, however, is another matter altogether, and trying to figure it out is akin to solving a badly-designed obscure point-and-click game from the 90s.

From the half hour or so that I could manage with the game, I’m pretty sure your own house in the game has no purpose. There didn’t seem to be anything to interact with in there — at least not in the first act of the game, anyway. The neighbour’s house is where everything happens. It’s pretty clear what the end goal is — there’s a locked door; we need to get behind it — but quite how we go about that is as clear as mud.

I’m not entirely sure how you’d figure it out without a guide. Hello Neighbor has no form of HUD, and there’s no indication of what objects you can and cannot interact with. Even the ones you can interact with leave a bit of a question mark at times as the controls are clunky and occasionally unresponsive. I sometimes had to click on an object several times from different angles for the game to register my intent. Couple this with the fact that you have no idea what objects you’re meant to be interacting with in the first place, and it’s a recipe for pure frustration. 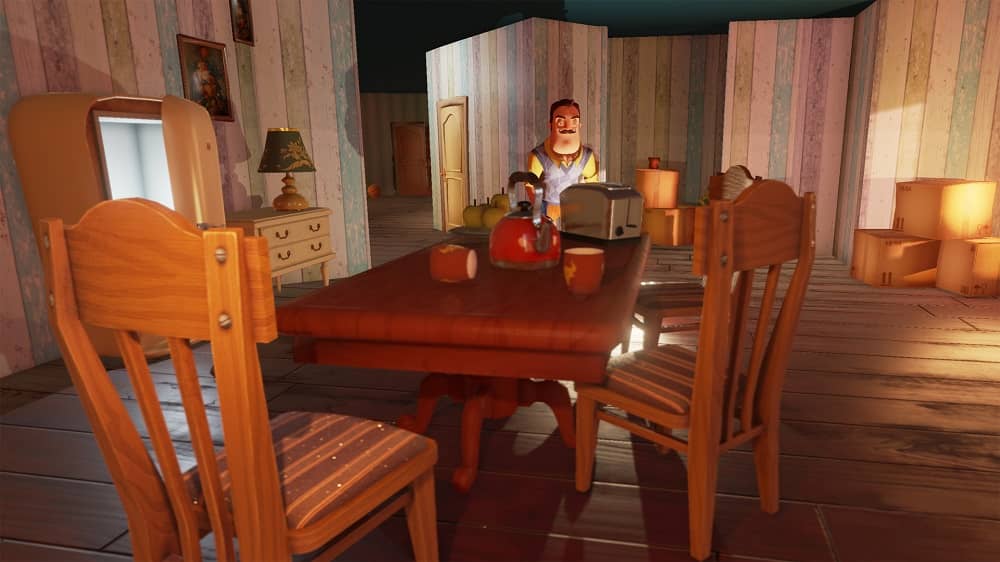 It seems that Hello Neighbor allows you to solve puzzles in a number of ways, which is nice, but each way seems just as obscure as another. The first segment of the game, for example — and forgive me for spoilers here, but hey, if you want to play it for yourself you’ll likely find yourself looking it up in a walkthrough anyway — requires you to get up on the roof. OK, that’s made fairly obvious due to the fact there’s a well-placed shelving unit just waiting for you to climb it, propped up against the side of the house. But once you’re at the top, you need to get something else to make the final jump. Turns out there are some boxes at the back of the yard, which can be added to your inventory. Great. Grab a few boxes, and back up the shelving unit we go. Only… trying to place the boxes meaningfully is easier said than done. Being able to place them strategically is near-on impossible thanks to the imprecise controls — you’ll need sheer dumb luck.

And that’s only the start of proceedings. Once you’re up there, that’s when it starts feeling more like a ridiculously difficult point and click adventure. Interacting with a picture on the wall will reveal a hole to climb through – yet the picture is one of a dozen or so in the room and gives no indication that you can interact with it. Later, you’ll need to use a bizarre-looking magnetised device through a keyhole in order to retrieve an object from a locked room. It’s the sort of stuff that sounds straightforward enough once you know what to do, but I can’t imagine having logically come to any of the conclusions the game expects you to make. At least, not without spending a couple of hours painstakingly attempting to interact with everything. 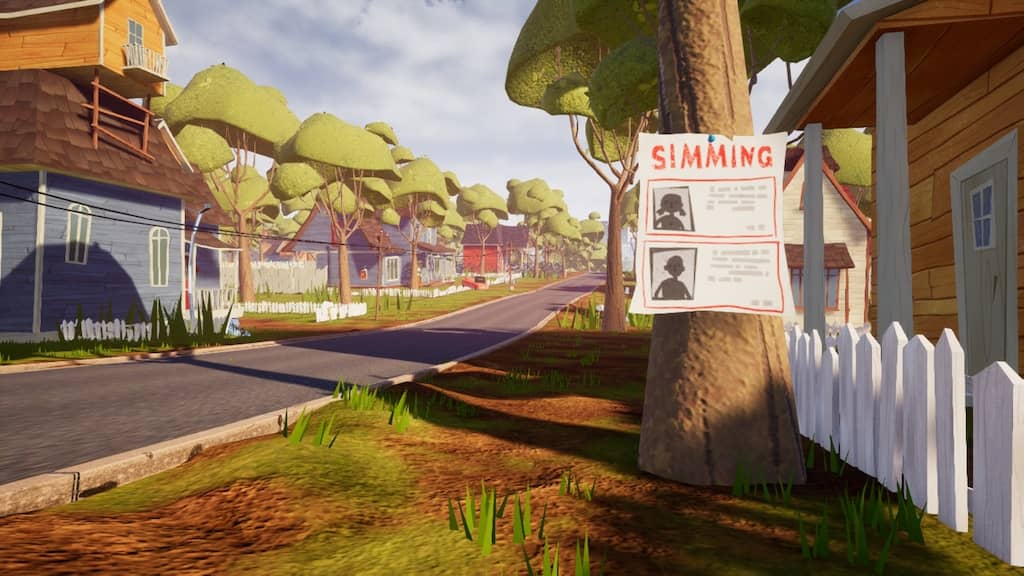 Alas, solving puzzles is merely the icing on the cake. The sponge of the game is surely the sneaking and stealth aspect, which, putting it mildly, leaves a lot to be desired. The art of sneaking is tedious at best; you don’t have much room to explore or hide – being boxed into a fairly small house means your chances of being caught are forever high. There’s not enough space to plan strategically as the game intends you to do; mostly, the best strategy you can have is to just Go For It. Besides, getting caught isn’t exactly a massive deal, anyway.

Hello Neighbor is touting itself as a horror game, but the only thing that’s horrifying about it is the sheer frustration you’ll feel. Sure, the first — and maybe even second or third time — the neighbour catches you is a little exhilarating, but that thrill soon wears off. If he catches you, his face will fill your screen, and it’ll fade to black. That’s it. You’ll be plonked back outside the house and sent on your merry way to try again. Once you realise that nothing “scary” will happen, all sense of fear or dread flies out of the window.

There’s a bunch of glitches, too. Several times I got myself stuck in a wall, and I even somehow got catapulted through the air by some kind of mysterious force. (I tried to recreate that one to no avail; it’d have been a useful trick on getting up onto the roof.) Overall then, Hello Neighbor is just Not That Good.

It’s a shame, because as I say, the game’s premise is extremely promising. The basic  idea of sneaking into a neighbour’s house to see what evil shit he’s getting up to is an age-old recipe for a timeless thriller, and to be able to get to do that in a video game is, on paper at least, brilliant. But for Hello Neighbor to be that game, it’d probably need to be remade from the ground up.