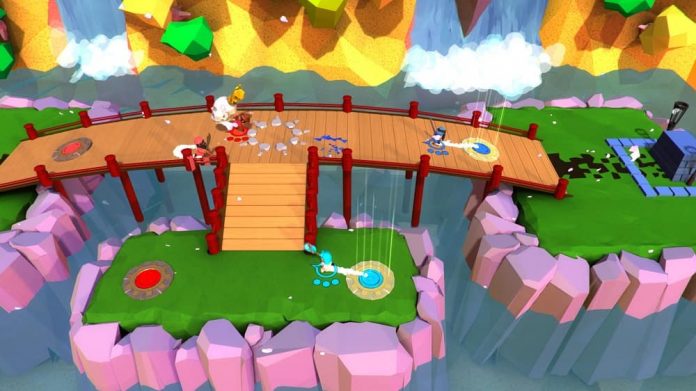 It was probably just over two years ago that we had our first game of Oh My Godheads.

Huddled over a PC in the dingy lighting of the Birmingham NEC, myself and Kim took on two strangers in a couple of matches, and if I remember correctly, we kicked their asses. And now, after nearly an eight month stint in Early Access on PC, we get to do it all over again. Well, if we were in the habit of inviting strangers into our home, that is.

Available on PS4, Xbox One and PC, Oh My Godheads is a hysterical local multiplayer game for up to four players that is sure to having you laughing out loud and cursing at everyone in the room. Four multiplayer modes are included, each offering their own team-based challenge, though there’s also a single player trials mode full of challenges to help you brush up your skills (and also unlock a Godhead). 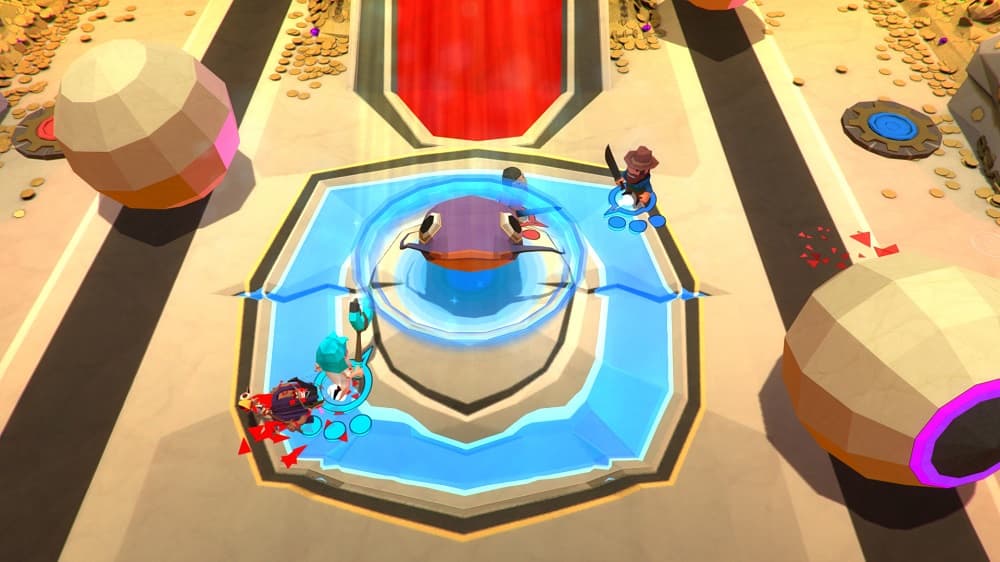 Capture the Head is perhaps Oh My Godheads’ most entertaining offering, tasking each two man team (ideally, you can play one-on-one or even three-on-one if you really want to) to grab a mythical Godhead from the centre of the map before delivering it to their base to chore a point. To succeed, players will need to work as a team, throwing the Godhead to one another and also taking the opportunity to attack the opposition when possible to momentarily take them out of the game. But there’s also another complication: the Godheads themselves have their own personalities that can make carrying them more than a little bit tricky.

The Bastet Godhead, for example, will randomly reverse your movement controls, while the Agyo Godhead will explode if you hold it too long. Overall there are 10 Godheads, each with their own quirk, and so to win you need to be aware of their powers and formulate a strategy to get them to your base accordingly. It’s silly, it’s fun and it rewards efficient teamwork. To me, they’re all the things that make a local multiplayer game great. 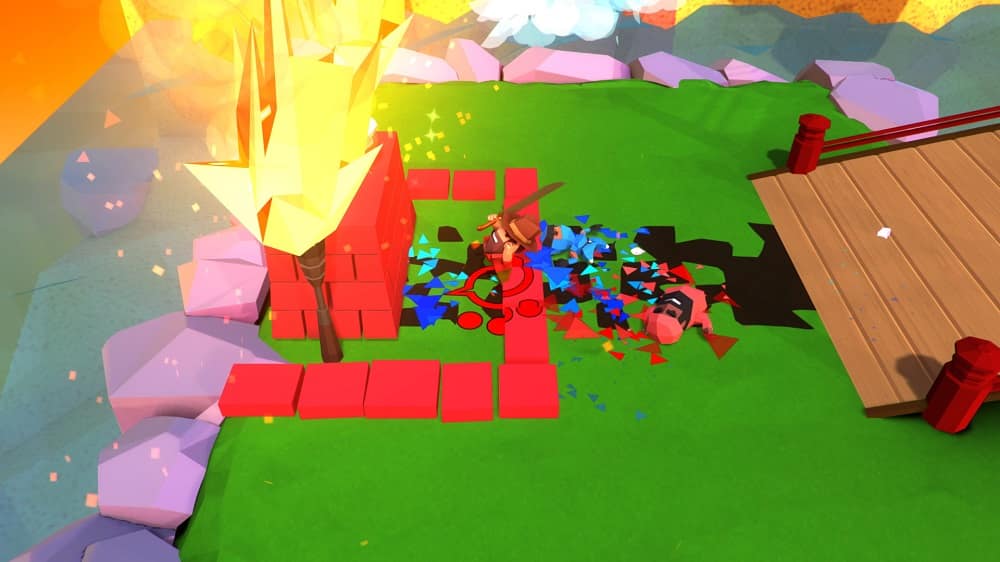 While Capture the Head is the best of what Oh My Godheads has to offer, it doesn’t mean that its other multiplayer modes aren’t entertaining in their own right. King of the Head is largely similar to Capture the Head, but with the aim of keeping hold of a Godhead for a specified amount of time rather than taking it to a base. Again, it rewards teamwork and knowledge of the Godheads and how they’ll affect you. The last two multiplayer modes are more just about outright war, though.

Headhunters is basically deathmatch, with individual players or teams slashing and charging at each other in order to score points, while Last Man Standing gives the round to the last player or team who’s left alive. In both of these modes the Godheads are exchanged for pickups, giving players a temporary edge over their opponents. The action is fast-paced and chaotic, but more importantly it feels balanced. I’d choose to play Capture the Head or King of the Head personally, but if you want simpler, more combat focused gameplay, Headhunters and Last Man Standing fit the bill.

Responsive controls ensure that Oh My Godheads’ gameplay doesn’t frustrate, while a wealth of content gives the game a surprising amount of longevity. There are 10 maps to battle across, set in places such as Mexico, Egypt and Japan, eight characters to play as, and 10 Godheads to gain mastery of. Match setting can be customised to your preferences, and A.I. players can be added into games if you don’t have three other humans close by. Of course, Oh My Godheads isn’t half as much fun when playing against the computer, but at least the option is there. 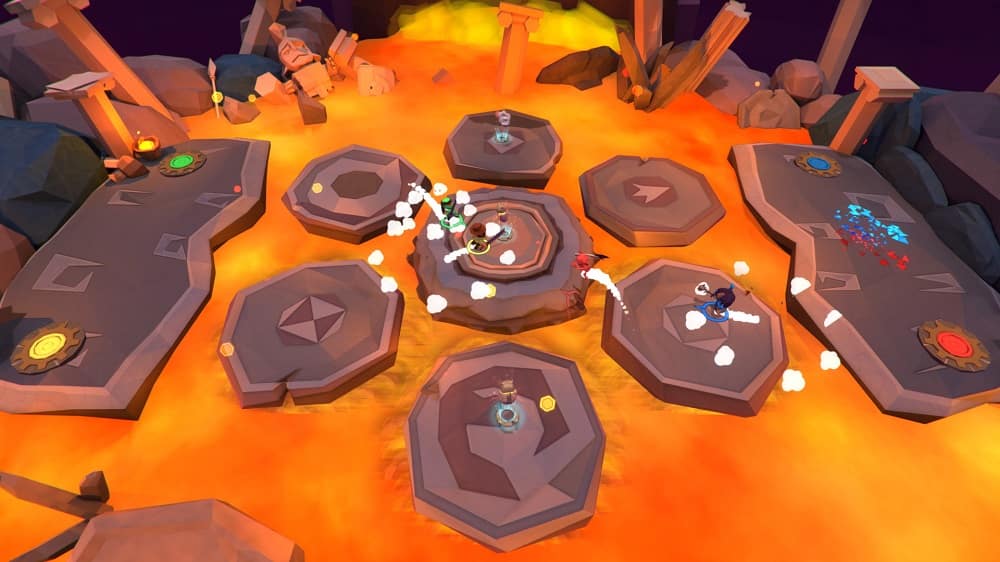 Low-poly environments and characters keep Oh My Godheads feeling light and playful, but the game does offer a level of competition that can see the action get rather heated. There’s a real flow to the gameplay, and being denied a point at the last second in Capture the Head and King of the Head will have you eager for your opponents’ blood. It’s easy to pick up, but rewards skillful and tactical play, and I think that is what will give Oh My Godheads legs.

It’s a shame that there are no online gameplay options – that, I feel, would make Oh My Godheads a commercial hit – but even just as a local multiplayer only game it deserves success. Oh my Godheads is without a doubt one of the most original, polished, balanced, and entertaining local multiplayer games I’ve played all year, and so if you’re the type of person that has friends around on a regular basis for some gaming action, it deserves your attention.

Oh My Godheads is available on PlayStation 4, Xbox One and PC. We reviewed the Xbox One version.