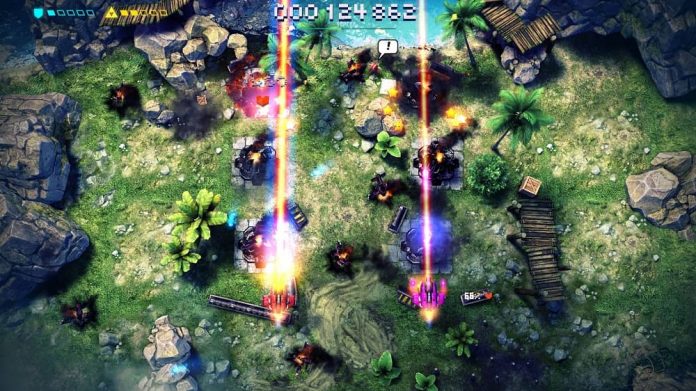 Let’s forget about loot boxes for a minute and focus on the bigger problem: games are often like drugs.

They draw you in, promising you a good time, and after your first hit – BANG! – you’re hooked. Minutes quickly turns into hours, hours into days, as you sit there, staring at the screen. You try to gather the will to put the pad down and walk away but you can’t; you just can’t. “One more go!” you tell yourself, but you know it’s not going to happen; you know that an hour later you’re still going to be glued to the screen. But unlike actual drugs, you can be confident that in the end everything will probably work out okay – you’ll either just get bored or complete the damn thing and be done with it.

Sky Force Reloaded is one such game that should come with a health warning, because it’s terribly addictive. Unfamiliar with the Sky Force games until I picked up Sky Force Anniversary in a sale a little while ago, I knew what I was letting myself in for with its follow-up, but to be honest I was more than willing to let myself be consumed by it; the rogue-like arcade shooter action of its predecessor was some of the most thrilling gameplay I’d experienced in years. And while Sky Force Reloaded is essentially more of the same, it features enough new content and features to make it an absolute blast for both those who are new to the series, and those who have poured countless hours into the entries that came before it. Throwing you straight into the action as soon as you begin the game, you start out with a souped-up ship that easily takes care of any small fry in your path. It’s when you encounter your first boss, however, that you’ll suffer a humiliating defeat. With your ship wrecked it’s time to start the game proper with a basic replacement, and from then on it’s all about the grind.

Sky Force Reloaded has more than 13 vertically scrolling stages for you to shoot your way through, but until you’ve seriously beefed up your ship’s defences and armaments you won’t be making any real progress through them. Your advancement through Sky Force Reloaded is controlled by your acquisition of two items – stars and medals – as they’re what you need to buy upgrades and unlock new stages that offer greater rewards.

Medals are awarded for completing stages and meeting certain criteria – usually destroying all enemies, saving all the stranded humans and avoiding taking any damage – while stars are collected within the stages themselves as you destroy enemies and random objects in the environment. Collect all four medals initially available on a stage and you’ll open up a harder variant with yet another four medals to attain. And once you’ve got those you’ll unlock the hardest version of the stage available with yet more. With greater challenge comes greater reward, with both your score and number of available stars being multiplied to entice you to not rest on your laurels. And since death has no real repercussions other than taking you back to the mission select screen, you may as well take the risk. And so the gruelling yet utterly addictive cycle of Sky Force Reloaded’s gameplay begins: you take on stages, gain stars, upgrade your ship, redo stages to gain medals, unlock harder stages, gain more stars and so on.

It perhaps feels easier to amass stars in Sky Force Reloaded than it does in Sky Force Anniversary but that’s no bad thing. Besides, I daresay that Reloaded gets a bit trickier towards the end of its campaign so it all evens out. Though other additions to Sky Force Reloaded seem to steadily give players a helping hand, and also tailor their experience to their own tastes a little.

There are a range of objectives to meet, with prestige being awarded when you do so that allows you to unlock a number of helpful technicians. Gringo Starr, for instance, will fill a random crate with loads of bonus stars for you to collect, while Burton Panic will bestow you with random power-ups. Only one can be selected at the start of a mission, but they offer a helpful bonus that you’ll appreciate.

A card system has also been implemented, granting you the chance to unlock a wealth of temporary and permanent perks. Cards appear randomly as you play, but only by successfully completing the stage you’ve found them in will you actually add them to your collection and be able to make use of them. Temporary cards offer 15 minute boosts, increasing such things as your firepower or the number of stars you can collect, while permanent cards offer benefits such as reduced upgrade costs or the use of shield generators within levels. Collecting cards is a slow process, but if you want to speed it up you can spend stars to use a card radar. It’s rather expensive and only has a 60% maximum chance of working, but if successful it’ll tell you exactly on what stage and difficulty a card will appear. Rounding out Sky Force Reloaded’s bevvy of new features is the introduction of multiple ships for you to use, each with their own little quirks. You’ll have to find all their parts before they’re added to your fleet, but they grant a small degree of gameplay variety while also providing some bonuses along the way. I quickly ditched my starting ship for one that had 50% more health and only 10% less speed, but also made use of a ship that featured an increased card drop rate yet only a tiny amount of health. You’ll be glad to know that your upgrades are carried between any ships that you unlock too, allowing you to swap between them at your leisure.

I’ve already sank more hours into Sky Force Reloaded than I care to mention, yet I feel like I’ve still only just scratched its surface. It’s a game that I’ll return to time and time again, steadily upgrading my ship and attempting to master the fiendish later stages. The grind will be a problem for some, sure, but for most it will be a harmless hook that draws them into some brilliant vertically scrolling shooter gameplay, backed up with a solid soundtrack and eye-catching visuals. Sky Force Reloaded is indeed like a drug, but it’s one that provides high upon high. And even though you’ll often literally crash, you won’t feel anything but the urge to jump right back in again.

Sky Force Reloaded is available on PlayStation 4, Xbox One and PC. We reviewed the Xbox One version.