Over the years there have been some great gaming franchises that for some reason or another have seemingly been dropped.

Sales perhaps dried up for many for them, making it not commercially viable to keep them going. For many though, you kind of get the feeling that the developer just didn’t know what to do with them or that they simply just forgot they existed.

Here are ten game series that we’ve absolutely adored at some point or another, but now they lay dormant. We dare say some of them will be revived in the next few years at least, but we don’t hold hope for them all.

The original Suikoden and its sequel stand among the best JRPGS of all time. Honestly, they are brilliant, and if you’ve still got a PS3 or PS Vita you should check them out on the PlayStation store as they’re cheap as chips.

Unfortunately many of the other Suikoden games weren’t quite as good, but 2006’s Suikoden V came pretty darn close. That was essentially the last of the ‘proper’ Suikoden games, though, with 2008’s Suikoden Tierkries for DS and 2012’s Genso Suikoden: Tsumugareshi Hyakunen no Toki for PSP being spin-offs that just didn’t capture the series’ magic.

When it comes to Suikoden we’d gladly sacrifice an arm and a leg for another mainline release. It doesn’t need to have fancy graphics or anything like that, Konami. All we want is a classic JRPG with a gripping political story and 108 wonderful characters to recruit. Is that too much to ask for?

It’s been 6 years since the release of the fantastic Touch My Katamari on PS Vita. Sure, there’s there’s been a couple of releases on iOS and Android since then, but we don’t count them because… well… they’re mobile games.

We’ve spent countless hours over the years rolling up toys, food, people and even buildings in order to please the King of All Cosmos, and it’s always been a pleasure. The graphics are colourful, the music is quirky, and the whole premise is just so bizarre that’s it’s hard to not be drawn into the crazy action.

Will we ever get a new Katamari game on console? We don’t know. But we’d sure as hell love one. Make it happen please, you beautiful Bandai Namco people.

Strolling through the streets, beating up goons as Axel or any of his violent like-minded friends was always a blast. And their soundtracks – holy hell their soundtracks – they were sublime. We’ve got Yuzo Koshiro to thank for them, and I doubt we’ll ever stop listening to them.

Unfortunately the series just stopped after 1994’s Streets of Rage 3. There’s been rumours over the years that SEGA tinkered with the idea of taking the series into the realm of 3D but nothing has ever come to fruition. And while countless other side-scrolling beat’em ups have reared their heads, none of them have ever quite matched up to the Street of Rage series’ greatness.

What would we like to see? A 2D Streets of Rage revival with stunning artwork, a brilliant electronic dance soundtrack and maybe even branching paths. It’ll probably never happen, but we can dream.

There’s been a wide variety of Castlevania games over the years. Straight up platformers, 2D action RPGs and 3D adventure games included. And while some of them turned out to be a bit rubbish, most of them were absolutely brilliant.

Castlevania: Symphony of the Night, for example, is perhaps one of the greatest games ever made, while Castlevania: Lords of Shadow proved to be a great 3D reimagining of the series. Ever since the poorly received sequel to that title, however, talk of any more Castlevania games has ceased.

While we loved Castlevania: Lords of Shadow and its sequel, what we’d really like to see is the revival of the 2D Castlevania games. The Switch would perhaps be a great place for them, with digital releases on PS4 and Xbox One, too. Think Castlevania: Dawn of Sorrow or Order of Ecclesia, but darker. It’s unlikely to happen, but at least we’ve got Koji Igarashi’s Bloodstained: Ritual of the Night to look forward to.

We remember playing Shinobi on the Master System when we were just young’uns. But it was Shinobi 3: Return of the Ninja Master on Mega Drive that truly planted the series in our hearts, though.

Since then there’s been a few Shinobi releases, such as the series’ first foray into 3D simply titled Shinobi for PS2, and also Shinobi 3D for the 3DS, but none of them have captured the magic of the earlier games.

For a modern day revival we’d like to see Shinobi go open world. Imagine, you could play once again as Joe Mushashi, using his ninja skills to scale buildings, sneak around undetected and eliminate foes with well-aimed shurikens. And when the shit hits the fan, you could call upon your magic abilities to give you the upper hand. That’s something we’d certainly like to play.

At one point in time, Project Gotham Racing was Microsoft’s premier racing title, but then Forza Motorsport came along and it was quietly sidelined. Plus, Bizarre Creations, its developer, was acquired by Activision.

In the Project Gotham Racing games, finishing ahead of the pack wasn’t the be-all and end-all – it was about earning Kudos by driving with style. In fact, many of its events weren’t even races; rather, obstacle courses. All of the Project Gotham Racing games were visually impressive, which makes it a shame that none of them are currently playable on Xbox One. Though it’s probably because of licensing issues.

With Forza Motorsport and Forza Horizon both currently being churned out once every two years, there’s probably no place for a new Project Gotham Racing game in Microsoft’s eyes. But hopefully the series will make a return at some point.

As a series, Silent Hill peaked at its second instalment. But that doesn’t mean that any releases since then haven’t had their merits.

In 2014, however, P.T. was released on the PlayStation store. It was a playable teaser which upon completion revealed Silent Hills, a new entry in the series being developed by Kojima Productions. Just a year later though, Hideo Kojima left Konami under a dark cloud, and Silent Hills was cancelled.

God knows if a new Silent Hill game will ever see the light of day, but it’ll be a damn shame if the series is well and truly dead.

Sure, there’s plenty of fighting games released these days, but how many of them star characters that all suffer from zoanthropy? I’ll tell you. None.

Four Bloody Roar games were released between 1997 and 2003, and while they weren’t quite as good as the Street Fighters and Tekkens of their days they put up a bloody good fight. Mechanically it played like a toss up of them both, but its twist was that its characters could turn into beasts on command to gain the upper hand.

Apparently Bloody Roar 5 was in production, but got shut down following the closure of Hudson Entertainment in 2011. A year later Hudson Soft merged with Konami, meaning that they probably now own the property. As such, there’s probably not a chance in hell that a new Bloody Roar game will ever see the light of day.

Technically, the Spyro the Dragon series is still going seeing as Skylanders was a reboot of it, but we’d like a proper new Spyro game to go at.

It’s not out of the realms of possibility – the recent remaster of the original Crash Bandicoot trilogy was hugely successful, showing Activision that there is still a market for traditional old-school platformers. Whether it will actually happen though remains to be seen.

If there was a new Spyro the Dragon game we’d like them to keep it simple and free of any toys-to-life nonsense. All we want is to able to control cute little Spyro throughout a beautifully constructed world full of platforming, puzzles and combat. That would be real good.

Full of amusing British humour, the Fable series has provided us with hours upon hours of engrossing action-RPG adventuring over the years.

A remaster of the original Fable called Fable: Anniversary was the last proper release in the series, with the online co-op focused Fable Legends cancelled in 2016 alongside the closure of Lionhead Studios.

Fable fans can currently play Fable Fortune, a collectable card game that began development before the closure of the studio, but other than that, signs that the series remains alive are scant. Well, until recently, anyway.

In the last few weeks there have been rumblings that Fable 4 is in development, with Forza Horizon devs Playground Games possibly at the helm. We can’t say if the rumours are true or not, but they definitely make sense. I guess we’ll just have to wait and find out for sure. 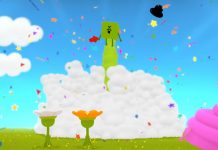