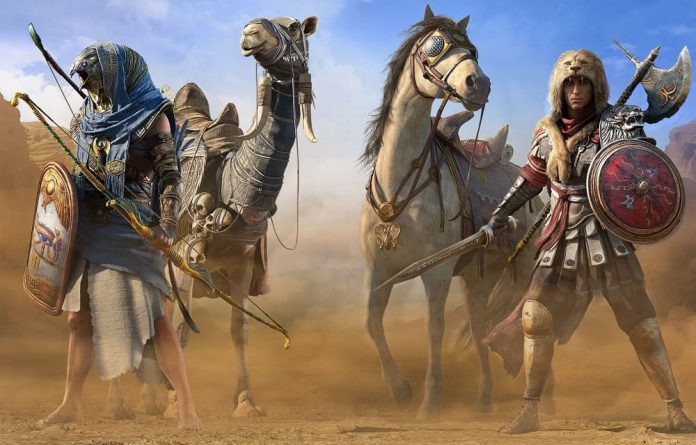 The world of Assassin’s Creed Origins is massive, yeah? And the best way to see it is on the back of horse. Well… usually it is.

I was on an adventure. Nearly at the end of the story, I still had more than half a dozen areas on the map left unexplored. It was time to see all of Egypt and there was only one thing for it: Bayek and his trusty horse — who I named Brian — butt to saddle, on an epic journey across desert, mountain and town. We were going to see everything.

And we did. For a bit. Brian stumbled once or twice and neighed in protest a few times as I tried to make him go up or down inclines that were a little bit too steep, but for the most part, we trundled along, finding new towns, discovering the odd bit of treasure and engaging in one or two bouts of fisticuffs as we progressed.

But somewhere along the way, my poor equine friend must have lost the will to live. You see, we’d reached an especially mountainous region of the Egyptian countryside. I wasn’t paying attention to the terrain in front of me, too busy taking in the scenery. I didn’t see that we’d approached a HUGE MASSIVE CLIFF EDGE. So I kept on going, spurring Brian onwards.

Either he didn’t see it either, or he just stopped caring about living by this point. Normally, horses pulls back when you reach a ledge – just to remind you that, y’know, horses can’t fly. But not this time. Brian just kept on going, right over the edge and into the abyss.

I’m sorry, Brian. I promise I’ll take more care of you and be more aware of my surroudings next time. I hate to imagine the giant THUD you made as you landed on the sand hundreds of feet below that cliff. RIP.

The Cinematic Trailer for Assassin’s Creed Valhalla is Here

The Next Assassin’s Creed Game is Valhalla, Full Reveal Today