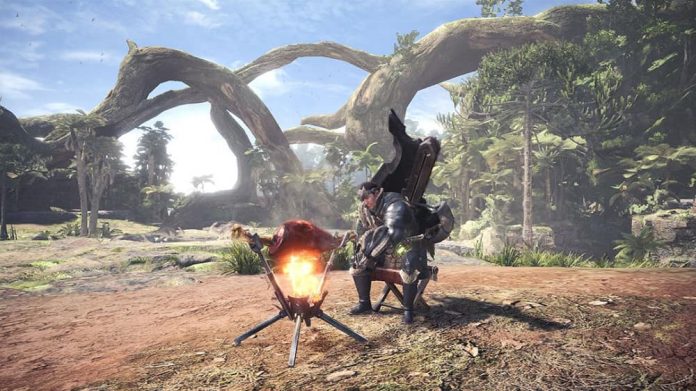 Managing your stamina is important in Monster Hunter World.

Run out and you may find yourself at a disadvantage; your character may become immobile for a few moments while they try to catch their breath, for instance. But by consuming a well-done steak, you can gain a considerable stamina boost that will give you the upper hand. The trouble is, getting a well-done steak can be tricky.

You should automatically have the spit roast equipment that you need to cook a well-done steak on you whenever you’re out in the field, but to begin cooking you’ll also need some raw meat. To get that, you’ll need to kill some of the docile monsters found throughout the lands, such as the dinosaur-like creatures that you find near the southern camp in the Ancient Forest. Once you’ve got some raw meat, equip the spit roast and press X on Xbox One or square on PS4 to start cooking.

Once your character has begun rotating the meat over the heat, how well it is cooked will depend on when you press B on Xbox One or circle on PS4 to stop. Do it too soon and the meat will be raw. Too late and it will be burnt. To get it well-done you need to stop cooking when the timing is just right.

Some people may be able to get it right by looking at the colour of the meat, but I think it’s easier to time the cooking of the meat to the music that plays while you’re doing it. Try cooking some meat a few times and work out at which point during the music you need to stop cooking to make sure it’s well-done. I’ve found that it’s when the second little ditty starts near the end of the track, if you understand what I mean by that.

Once you’ve cooked your well-done steak make sure you equip it for use before tucking into it by pressing X on Xbox One or square on PS4. Yum, yum!

How to Capture Monsters in Monster Hunter World

How to Mount Monsters in Monster Hunter World