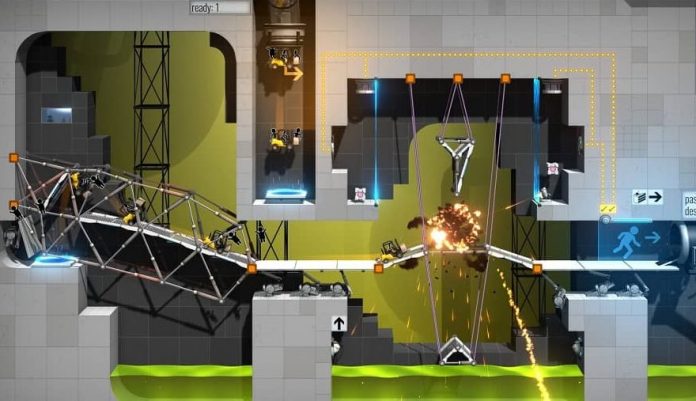 Bridge Constructor Portal has taught me that not only is burning your bridges a bad idea, plunging them into acid or exposing to gunfire is equally hazardous.

In fact, Bridge Constructor Portal sets you up to fail time and time again — and it’s all the better for it. I went into the game expecting that I’d be confidently admiring the sheer perfection and god-like symmetry of my creations. Half an hour later I was hunched up in my chair, watching my shamefully shoddy construction groan and creak as a lone vehicle painfully inched its way across. Against all odds, the plucky forklift-that-could reached the safety of the exit and, buoyed by my success, I sent a further five vehicles across. The five soul-shattering splashes that followed, however, made me realise I probably wasn’t cut out for a career in bridge construction. 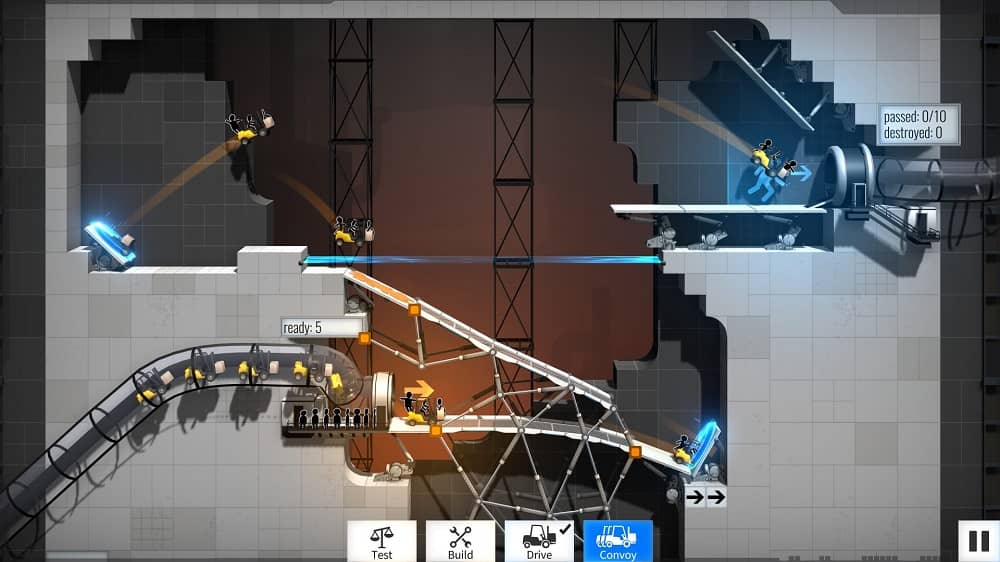 Like its predecessors, Bridge Constructor Portal charges you with creating bridges that are capable of supporting vehicles as they drive from one side of the level to the other. The snag is that while you have an unlimited supply of ropes and girders, you can only anchor your creation to certain specific points in a level. Bridge construction becomes a precarious affair as you attempt to create a structure that, for the most part, supports itself. The game offers plenty of useful hints, such as telling you to use triangles to strengthen your creation but if you’re a newcomer to the series, trial-and-error will be your cruel, unforgiving teacher.

And then there’s GlaDOS. Bridge Constructor Portal sports the general aesthetic of Valve’s action-puzzler series, yet GlaDOS herself takes something of a back seat. Voiced by series regular Ellen McLain, the testing-obsessed robot is acerbic and quick-witted as ever, advising you, for example, that you will be listed as the “cause of death” employees’ death certificates. But since she serves only to introduce each level, the game lacks the antagonistic interplay that made Valve’s own Portal games such a joy. Instead it’s Portal’s other trappings that lend Bridge Constructor Portal its appeal; once you’ve mastered the basics of building a bridge that doesn’t kill every single person who drives across it, the game tasks you with tackling additional hazards. 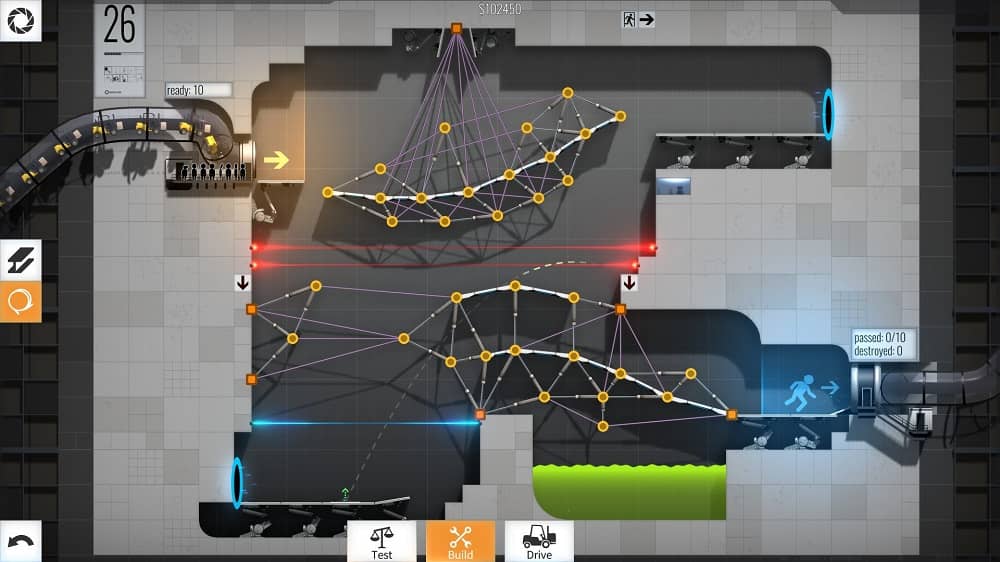 Whereas Bridge Constructor’s levels were largely open, Bridge Constructor Portal’s test chambers are far more convoluted. And while you can’t create your own portals, you’ll be required to employ them to negotiate each level. Speed is an important factor here: fail to build up enough velocity and even if your test vehicle exits a portal it may just plunge into the acid that, more than often than not, covers the floor of each test chamber. Each new obstacle brings with it a whole new series of challenges. Enough, in theory, to keep you hooked although whether Bridge Constructor Portal can maintain momentum through its sixty levels remains to be seen.

Bridge Constructor Portal is an odd mashup, but it works. Despite my initial misgivings that it sprung to life merely because Valve had to do something with the Portal franchise, it’s a fine, budget-priced puzzler that I had a lot of fun with. It’s certainly taxing and you will fail far more times than you succeed. But finally getting your creation to hold together (untidy as it may be) and wrapping your head around the game’s more challenging levels is genuinely rewarding.

It’s not Portal 3, but don’t let that stop you from giving Bridge Constructor Portal a go; chances are you’ll be… GlaDOS… you did.*

*Hey, at least I didn’t say anything about cake.