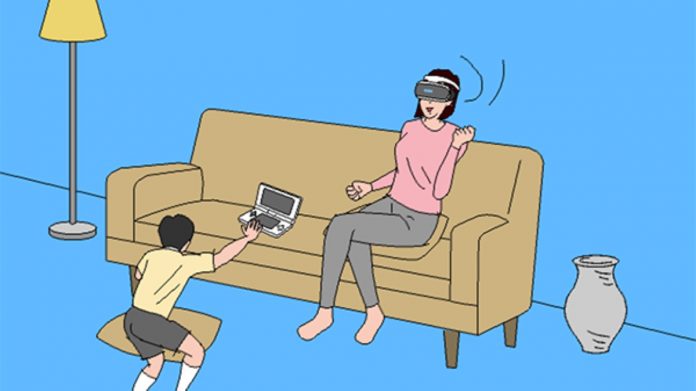 Mom Hid My Game is a Switch game about… well, your mom hiding your game.

You’re a young kid, and all you want to do is play your 3DS-like gaming device. But your gosh-darn mother keeps hiding it in the weirdest of places. Underneath grandpa? Check. Inside a plantpot? Check. Inside an elephant? Check. Through simple point-and-click style puzzles, it’s up to you to figure out how to get your game back without your mom — or a ninja or a snake — catching you.

It simulates escape-the-room style Flash games of the mid-2000s, with plenty of humour and clever puzzles thrown in. With 50 levels to play through, there’s nothing enormously taxing so you’ll probably be done in an hour or so — but you’ll struggle to put it down until you’ve completed them all. Most levels are pretty straightforward, and involve searching the environment for objects that can be used to solve a small puzzle in the environment — using a ladder to reach a high area, for example, or using a broom handle to reach something under the sofa. There are a fair few red herrings though — sometimes, items are placed to catch you out. Pick up mom’s wallet and she’ll leap on you for thieving faster than you can say, “but I was just looking!”

Mom Hid My Game is at its cleverest, though, in the levels that forgo the regular conventions of the game. Most levels can be completed with touchscreen controls, or by using the analogue stick to control a cursor. Once or twice, however, you’re tossed a curveball that requires you to think outside the box and use the d-pad or move controls. It’s simple but effective — and unless you keep your mind open to all the functions of your Switch, the game’s likely to catch you out. Don’t worry too much about getting stuck, though: a hint system is readily available should you get stuck on any level. In the form of a simple game of pairs, find two matching hint cards to get a very helpful piece of information. The more difficult levels will have two hints available. It makes a change than having to rely on a Google search to find solutions.

Aside from clever puzzles, there’s also plenty of illustrated humour that’ll have you chortling as you play. Fishing your game out of an elephant’s dung, for example, or feeding a pizza to a stone statue. How about making a human pyramid collapse so you can walk past them to get your game out of a cupboard, or strapping mom into a VR headset so you can sneak past her? For an overtly simple game in terms of gameplay and style, the amount of clever and situational humour packed in is pretty impressive. It just leaves you wanting more after you’ve finished level 50. Once you’ve finished the main bulk of the game, it’s not quite all the game has to offer you — a very random minigame opens up after you’ve completed level 50. A gymnastics-themed game that seemingly has nothing to do with the rest of Mom Hid My Game, it has you maintaining momentum while you swing around a pole. It’s not going to increase the game’s longevity much, but it’s fittingly bizarre.

Considering it only costs £4.49/$4.99, there really is nothing to dislike about Mom Hid My Game — especially if you cut your teeth playing random escape the room Flash games back in the day. It’s wholesome, harmless fun — it’s just a shame there isn’t more of it. Mom Hid My Game Again, anyone?

Mom Hid My Game is available on Nintendo Switch.