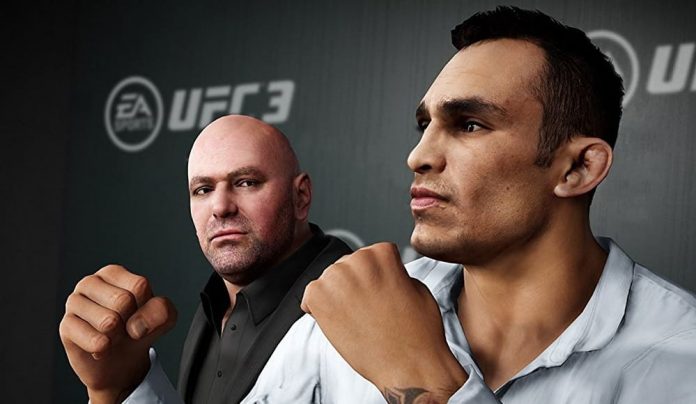 The fighting in EA Sports UFC 3 is the most realistic and hard-hitting I’ve ever experienced in a videogame.

You can see the force put into every punch and kick, and when they connect with your opponent you feel their pain. Blood and sweat sprays from the impact, and signs of wear and tear develop as the fight goes on. After a few rounds, there are bound to be cuts and bruises aplenty, but until one fighter concedes, the show must go on.

EA Sports UFC 3 further develops the gameplay systems of its predecessors, and as a result, it plays exceedingly well. Whether you focus on striking, grappling or submissions to overcome the opposition, you’ll discover a range of combat options that give the action authenticity. What’s more, for the most part, it’s quite intuitive too. 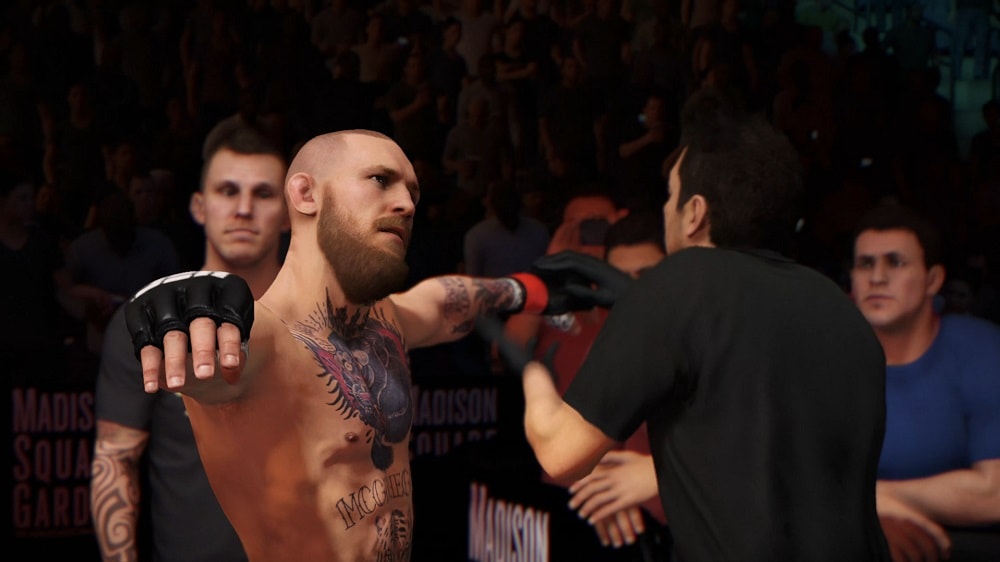 Striking with a range of punches and kicks is easily performed by pressing the face buttons, which can be modified by also holding one or more shoulder buttons and triggers. You can also quite easily block and dodge, with the action only really getting more complicated when it ends up with both fighters grappling with each other on the floor.

Initially, the range of options available when two players find themselves in this situation can be daunting. You’ll be unsure as to how to secure yourself a better position, or simply how to get up. Then you’ll get put into a submission manoeuvre and really find yourself stumped. Luckily there are ample tutorials at hand to get you up to speed, but even then, unless you make grappling prominent in your fighting style, once in a while you’ll find yourself bewildered when brought to the ground. 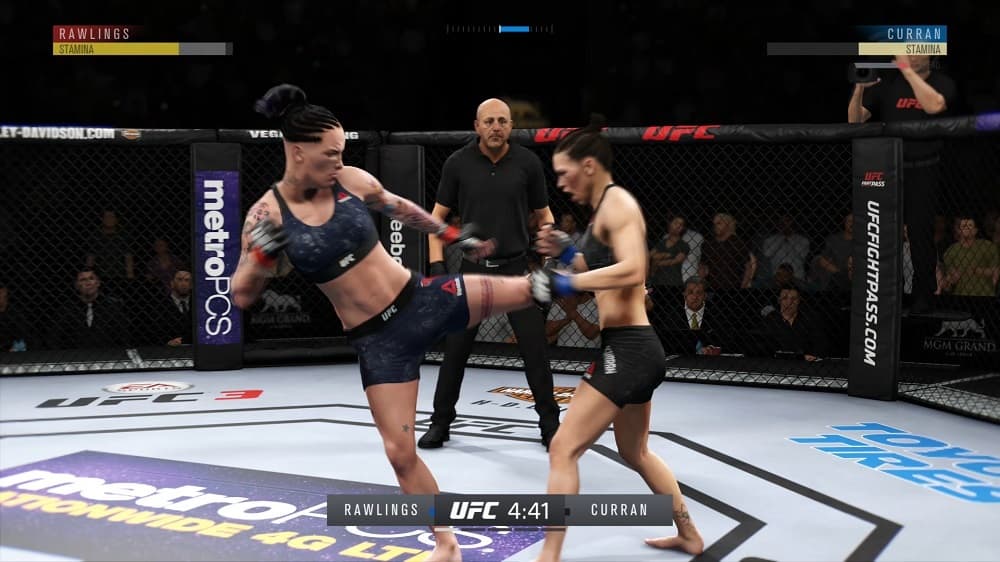 The variety that EA Sports UFC 3 offers its pugilists is to be admired, however, especially when it’s pulled off so seamlessly. Bouts are exciting affairs in which you can never count your chickens – one blow or grapple is all it takes to turn the tide for either combatant. And it always feels believable and fair. A hard-fought victory is just that; you’re never really handed it on a plate, you’ve got to earn it.

It’s just a shame then, that EA Sports UFC 3‘s main mode, its career, is rather dull.

Career mode lets you create your own male or female fighter, choosing their weight class and fighting style before challenging you to become the Greatest of All Time. It’d be fun if it wasn’t for all the busywork that’s involved. Between every fight you’ll have a number of weeks in which to train, learn new moves, engage in PR and do some sparring. While learning new moves and sparring allow you to take part in a bit of action, however, training and engaging in PR have you just selecting options in a menu, repeatedly.

You soon tire of going into each menu time after time, performing the same robotic actions to steadily increase your stats and popularity between fights. If only there were minigames for each training course or some kind of interactivity to the PR actions it would be so much more engaging, but there are not. Therefore, you’re left with a mode that’s entertaining in small doses, but tedious if played in extended bouts. 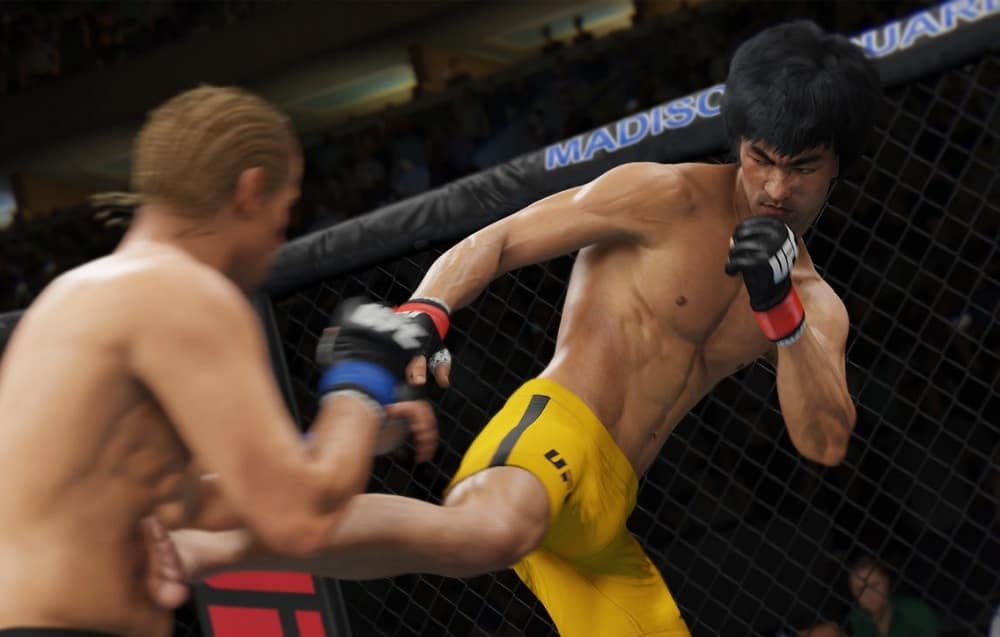 Thankfully, EA Sports UFC 3‘s Ultimate Team mode is a little more interesting. A card-based mode that has you expanding your deck to develop a roster of fighters, Ultimate Team will keep many fans glued to their screens until the next UFC game is released, though it would be a hell of a lot better if you could acquire cards at a faster rate. Getting the best cards is all that matters in Ultimate Team mode – they give you new moves and fighters, enhance your stats, and provide bonuses – but unless you’re prepared to grind for the in-game currency to purchase them in random packs, or buy them with real money, you’re not going to have a great time.

As a result, you’re left with the game’s quick fight, tournament and online division modes to provide most of the fun. Though that’s not bad, as there’s plenty of enjoyment to be had with them. There are a huge number of real UFC combatants included in EA Sports UFC 3, such as Ronda Rousey and Connor McGregor, and you can also put together your own fighting monsters with the game’s robust create fighter option. Taking any of them into matches against the CPU or real people over the internet never failed to put a smile on my face, even when it was being pounded into the mat by a heavy-hitter’s fists. 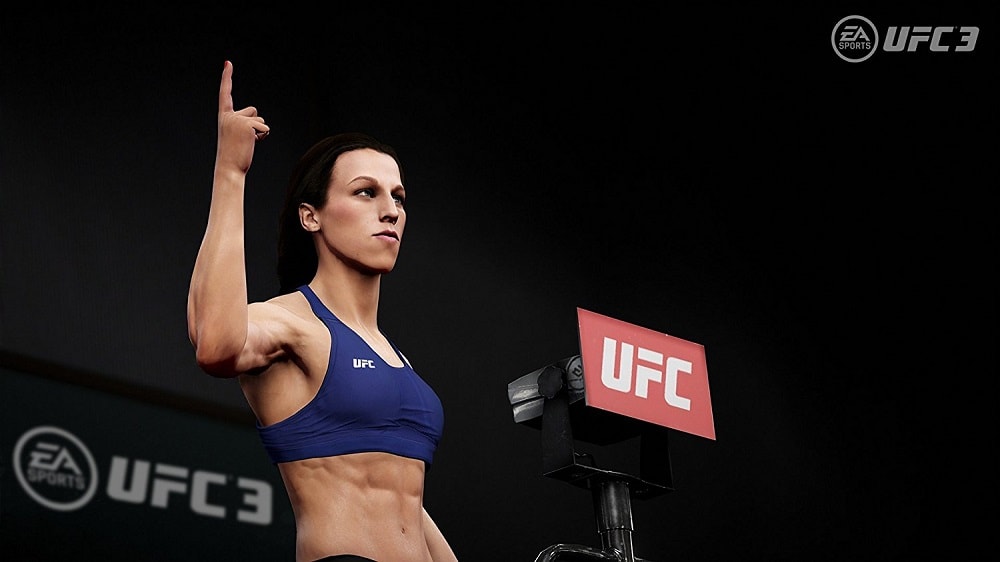 Those who do like to play online will be happy to hear that the EA Sports UFC 3‘s netcode seems solid, and the performance of the game in general is too. Those who are playing the game on a PS4 Pro or Xbox One X have the option to prioritise the framerate or resolution, but in either mode the game remains pleasingly fluid. Considering the detail and brilliant animations on offer, that’s quite an achievement.

Overall, EA Sports UFC 3 is a great game let down by some modes that just don’t entertain as much as they should. If you have the patience to click through menu after menu or grind for cards then this is undoubtedly the best UFC game ever made. But if you want to fight without having to do busywork you’re likely to end up abandoning the career and Ultimate Team modes to focus on those that just let you enjoy the crisp controls, accomplished graphics and exciting combat. Then, you’re sure to be dazed by EA Sports UFC 3‘s authenticity.

EA Sports UFC 3 is available on PlayStation 4 and Xbox One. We reviewed the Xbox One version.