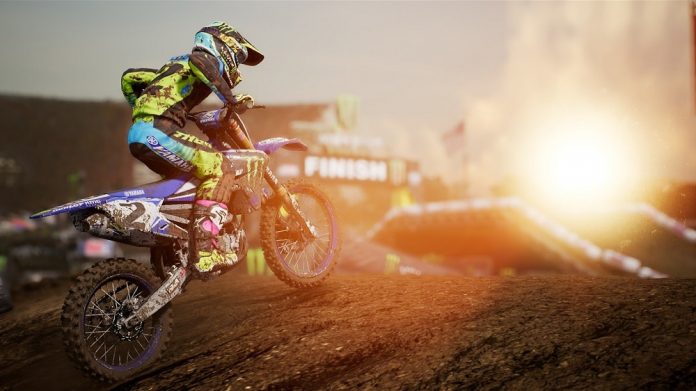 Supercross is one of those niche sports that can easily pass you by unless you look for it.

I have to admit, I don’t keep up with the real-world happenings of the sport, but as a fan of racing games, I always like to get hands-on with the latest Supercross release. They offer something a little different to the likes of Forza and Need for Speed after all, and variety is the spice of life.

Unfortunately, I’ve never played a Supercross game that could be considered essential, and while Monster Energy Supercross is perhaps the best recreation of the sport I’ve ever played, it’s still lacking in some areas – mainly content.

Predominantly a single player experience, though there are limited online options for those who do want to play with human opposition, Monster Energy Supercross plays well but isn’t exactly overflowing with features. Alongside the usual single race, time attack and championship modes, career mode is perhaps the game’s shining jewel, but unless you opt to take part in qualifying sessions, heats and semi-finals before the main events, you’re likely to blast through it in a handful of sessions. Your career plays out as you’d expect; after creating a rider, you choose a free bike and take your pick from either the 250 East or West divisions to cut your teeth in. As you race through events you unlock sponsors that you can sign up with to change the look of your bike, and also provide you with bonus cash at the end of races if you meet their requirements. Win the division, and you can either play though another 250 division or tackle the harder and more expansive 450 division.

Of course, I’m perhaps oversimplifying things. You can, if you so desire, tinker with your bike’s settings to get the best out of it on each track. You can also use the cash you earn to improve its performance by buying new parts, or even buy your rider some new gear. None of that feels important, however. It doesn’t feel pivotal to your success. It’s merely there to give you something to do inbetween races. Luckily, the on-track action is filled with enough thrills and spills to keep you going back for more.

Monster Energy Supercross is perhaps the most accessible Supercross game I’ve ever played. As a sport, Supercross is very technical; it’s not simply about speeding around a dirt track as fast as you can by following the racing line. Instead, it demands strict control of your bike over bumps and jumps, effective use of both the front and back brakes, and thoughtful positioning of your rider’s weight. Many of these factors can be simplified for beginners, but fans of the sport will want the most authentic experience the game can muster. Devout fans will most likely turn off crutches like the rewind feature, set the physics to normal and extend the duration of races to max. They’ll also make use of advanced manoeuvres like the scrub to give them the advantage. The result is a racing experience that demands skill, control and determination, and for the most part it’s an absolute pleasure.

There are times where Monster Energy Supercross‘ authenticity is betrayed by an animation that just doesn’t look quite right. Like when you plant your bike on someone’s head after a jump with seemingly no negative effect on either you nor the other rider. And when you fall off your bike, you find yourself back on your saddle perhaps a little too quickly. They’re little things, but they break the immersion nonetheless, therefore detracting a little from the experience.

Immersion is something that Monster Energy Supercross does quite well, too, despite its awful pre-race announcer. I played the game on an Xbox One X for review, and I have to say it looks beautiful. The riders’ shirts flap realistically as they whizz around the track, and there’s just so much grimy detail that it’s hard to not be impressed. Performance is also delightfully solid, though there is a noticeable hitch just before the finish line which annoys a little, and load times are fairly lengthy. What’s impressed me most about Monster Energy Supercross though, is its track editor. In just a matter of minutes you can create your own mud-laden track full of jumps, bridges and embankments, and to me, that’s just brilliant. You can make use of your tracks in single event, time attack and championship modes, as well as download other players’ creations. And tracks can be uploaded too, allowing them to be downloaded by other players and played online. It’s a feature that certainly extends the life of the title.

Monster Energy Supercross does a lot of things to impress then, but its lacklustre career mode takes a lot of shine out of the proceedings. If you’re a fan of the sport you’ll find a lot here to like, what with its worthy selection of real world tracks and bikes. And mechanically, it plays rather well too. I’m just not sure how much you’ll get out of the title before it no longer excites, despite the presence of a track editor and countless customisation items to unlock. It’s undoubtedly the best Supercross game I’ve ever played, but it still falls short of real greatness.

Monster Energy Supercross is available on PlayStation 4, Xbox One and PC. We reviewed the Xbox One version. 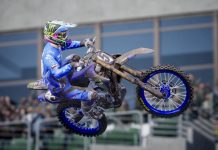