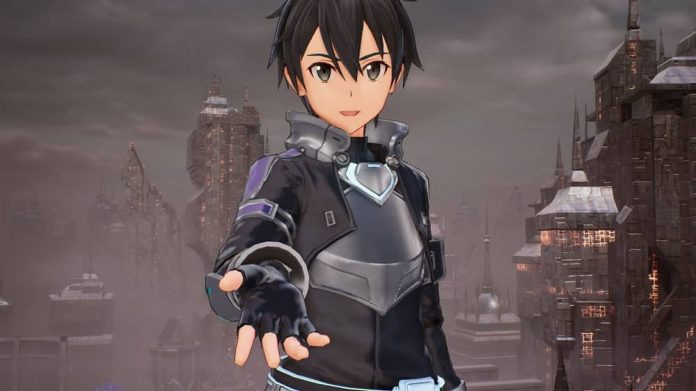 I have to admit, despite its downfalls, Sword Art Online: Fatal Bullet is surprising.

When it comes to the anime, I’ve always felt that everything in Sword Art Online has been done better elsewhere. But with a twist to its usual format, Fatal Bullet has suckered me in.

Set within the fictional VR-MMO of Gun Gale Online, Sword Art Online: Fatal Bullet is a JRPG that’s pretending to be an MMO. It’s a weirdly awkward framework for a game, sure, but it’s not one we haven’t seen before. Where Fatal Bullet changes things is in its new setting, dropping the previous fantasy game aesthetic for sci-fi. If you could trace the genealogy of games back to their inception, previous Sword Art Online titles probably are descendants of the .hack series while Fatal Bullet is a successor to Phantasy Star Online, at least in spirit. With this change in scenery also comes a change in protagonists. Instead of playing as the hero of the series, Kirito, you take the role of a totally new character that you design from the ground-up. It’s a nice change, mainly because of how boring most of the Sword Art Online cast are in general, but it’s also fun inserting yourself next to these characters. It doesn’t help matters since the game expects you to already be familiar with most of its cast, refusing to flesh many of them out further than recounting past exploits, but I’m not sure you can really blame it there.

The story is oddly different than most JRPGs as the game leans into its MMO setting wholesale. The protagonist enters Gun Gale Online as a newcomer and by sheer luck finds themselves in possession of one of the rarest items in the game – an advanced AI companion. The stakes here aren’t comparable to the normal end-of-the-universe fare the genre is known for these days, which is refreshing at first. Eventually, the whole thing is brought down by lengthy dialogue sequences that seem to be about nothing. It didn’t take long for me to dread any conversation in the game with so many of them turning out to be lore dumps of previous, unrelated Sword Art Online stories.

Sword Art Online: Fatal Bullet‘s combat, though, is another story altogether. It surprised me in the best way — an infusion of classic JRPG mechanics with third person shooter elements, the combat in Fatal Bullet is shockingly fast-paced. If things were tweaked just an inch, I could have mistaken this as a Platinum-developed title, if I weren’t already so familiar with their work. Combat works as easily as you can imagine for a game that combines two genres, but the end result is still satisfying and fluid. Enemies can be attacked by shooting them with the right trigger, and players can aim down sights to hone in on various weak points. By default, there is an assist mode available that allows you to auto-aim when not aiming down sights. It lets you match each situation with their demands, aiming in on the weak spots of giant bosses or spraying bullets towards an onslaught of robot scorpions. Thanks to a wide variety of weapon classes, the game can cater to plenty of playstyles. Just don’t expect that same variety in weapons and equipment, as there is a lot left to be desired on both fronts.

The shooter elements of Fatal Bullet however aren’t there on their own, but work in tandem with the game’s RPG mechanics. With a group of up to four party members, you’re able to pull from a long list of Sword Art Online regulars to fill out your gaming team. With different role types for each character, your team dynamic is just as important as your own personal loadout. Unfortunately, Fatal Bullet suffers from some annoyingly bad AI that forces combat to be more frustrating than it should be. Characters will often run head first into a group of enemies if another character has been downed nearby, no matter the cost. The end result is usually a team-wipe in circumstances any sane person would have stayed away from.

Every once in a while though, despite the janky AI, you’ll find moments where your team works together, like a well-oiled machine constantly reviving, healing, and buffing each other during tough boss fights – but these moments are almost always overshadowed by the many stupid mistakes from your AI companions. Fatal Bullet does offer a beefy co-op mode for those so inclined where players can team up to defeat different versions of bosses from the main game. You’ll often earn large payouts of in-game currency, but outside of that there’s little reason to take up the offer. Even more frustrating is that Fatal Bullet’s framework would work perfectly for a more robust online component. It’s baffling that you can fight a harder version of a boss but cannot run through said boss’s dungeon with friends. It’s hard to say whether or not this sort of content will be patched in later, since the Japanese version of the game has already received new content via small updates. For now, however, it’s an unfortunately dissatisfying appetiser of what could be.

All in all, Sword Art Online: Fatal Bullet is a game that swings for the fences. It promises much more than previous Sword Art Online games have, and it delivers on many of them. For any fan of the series, I’m positive Fatal Bullet may well be their favourite entry thus far. However, there are still some big missteps that hold it back from its true potential. The foundation laid by the game offers a surprisingly fun experience, even for those who aren’t that interested in the franchise, but thanks to poor AI, a boring story, and uninteresting characters, it isn’t able to become a great JRPG in its own right.

Sword Art Online: Fatal Bullet is available on PC, PS4 and Xbox One. We reviewed the Xbox One version.