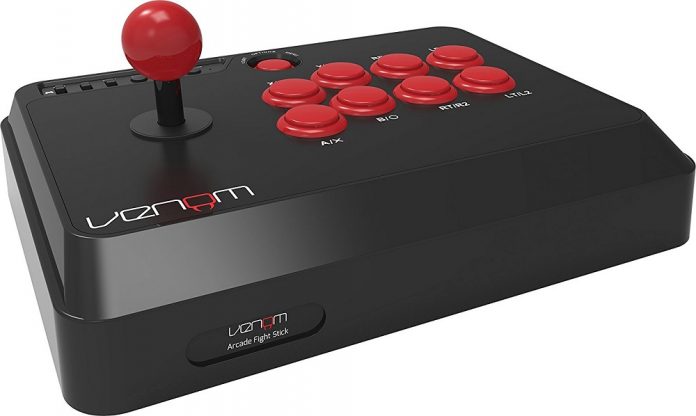 If you’re serious about fighting games, then picking up a fight stick is pretty much a must.

Most fighting games are created for the arcades after all, and so having a slab in front of you that recreates the same intuitive button layout for your console of choice is a boon. But what about if you game on multiple consoles and even PC? Street Fighter V is good, sure, but so is Killer Instinct. And the PC version of Tekken 7 is simply the best. Enter the Venom Arcade Fight Stick.

The Venom Arcade Fight Stick is great for those who like to game across multiple formats as it works with most of them. It’s compatible with the PlayStation 4, Xbox One, PC and Mac. And it’s even compatible with the PlayStation 3 and Xbox 360 if you still find yourself gaming with one of those. If you’re wanting to use it with either a PlayStation 4 or Xbox One, however, you need to have a controller connected to it via the supplied USB cable. It’s not totally ideal, but it’s a small price to pay for such versatility.

If you play with the Venom Arcade Fight Stick sat on a desk or table, your attached controller can be quite comfortably placed at the side. If you play with the stick on your lap though, you may want to invest in a longer USB cable so you can safely place the pad out of the way. Unless you already have one just lying around, of course. You don’t need to touch the pad once everything is up and running, it just has to be connected to get your console to recognise the fight sticks inputs. 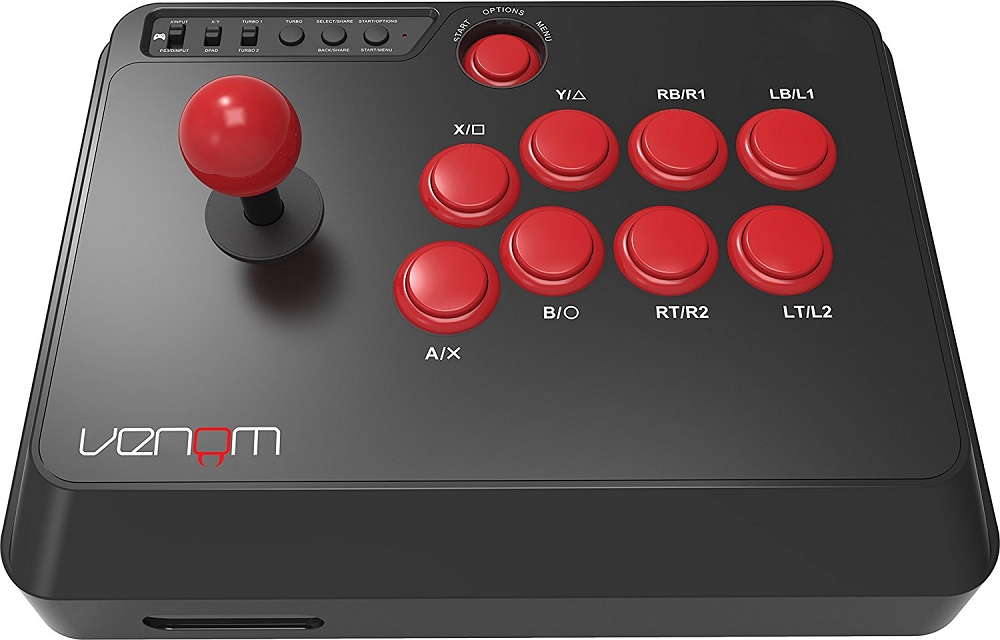 You can still use features like the PlayStation 4’s share options with the Venom Arcade Fight Stick thanks to the inclusion of a plethora of option and menu buttons, each taking on their own functions depending on what format you’re playing on. There’s also a turbo button and switch (though I wouldn’t recommend using them unless playing in single player), and a handy switch to change the stick between d-pad and analogue stick mode. How else would you be able to navigate Tekken 7‘s menus without one, eh?

Build quality is mixed, but for a fight stick retailing for around £60, it’s better than you’d probably expect. The Venom Arcade Fight Stick has a nice solid metal base with rubber feet to keep it in place, and its case is made from a sturdy black plastic. It looks unassuming, which I really like – it’s neither cheap nor flashy. The buttons themselves don’t have the same quality feel though. The stick feels a little light, while the buttons are spongy and a bit loose. For someone just starting out they’re perfectly fine, however, and the good news is that the parts can be changed for better Sanwa Denshi components at a later date.

All in all then, the Venom Arcade Fight Stick is an excellent piece of kit. For a fight stick it’s quite inexpensive, making it an accessible starting point for those who have yet to experience one. And for those who have multiple consoles and maybe even a PC it’s even more of a bargain as it’s widely compatible. It makes sense for anyone who’s thinking about taking their fighting games to the next level to pick up a Venom Arcade Fight Stick and cut their teeth with it, investing in some better quality parts further down the line if they decide to take things to the next level. Combining value with versatility, it’s definitely a winner.

Visit the Venom website for more information about the Arcade Fight Stick. You can also head on over to Amazon to order one right now.

The Best Bowling Games on PS4