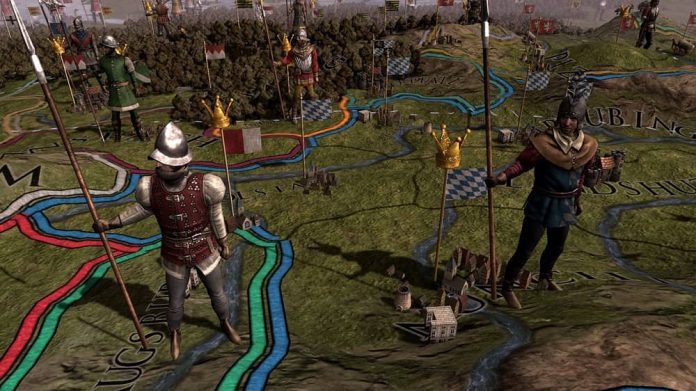 Europa Universalis IV lets you take control of any power in the world from 1444 straight to the 19th century.

In these years many things happened, many of them that were morally questionable, including colonisation. But if you want to do it right, here’s how!

To start your conquest of the new world you must first discover it, have colonists ready to settle the free provinces and for those provinces to be in colonial range.

This is easy enough to accomplish, if you follow these easy steps. 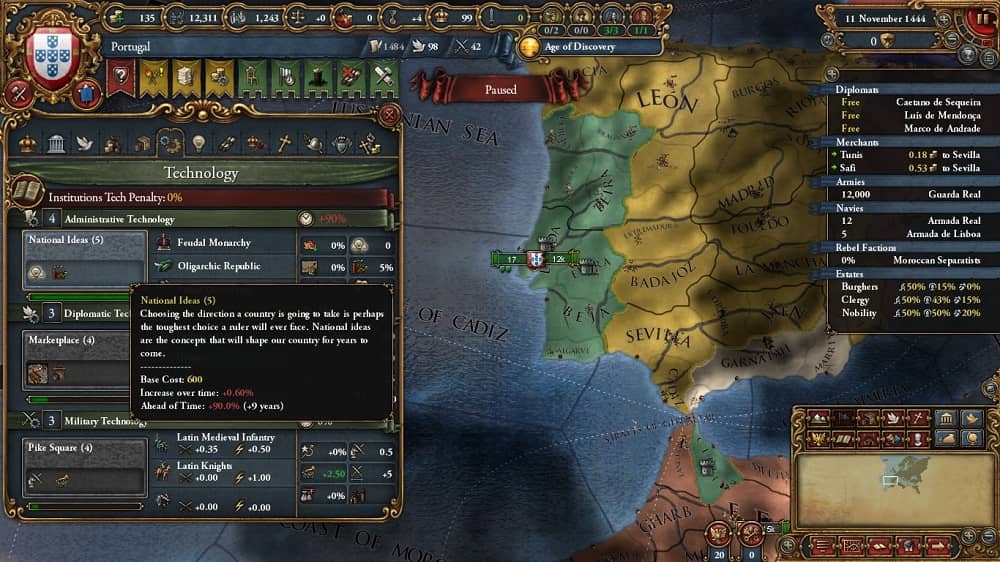 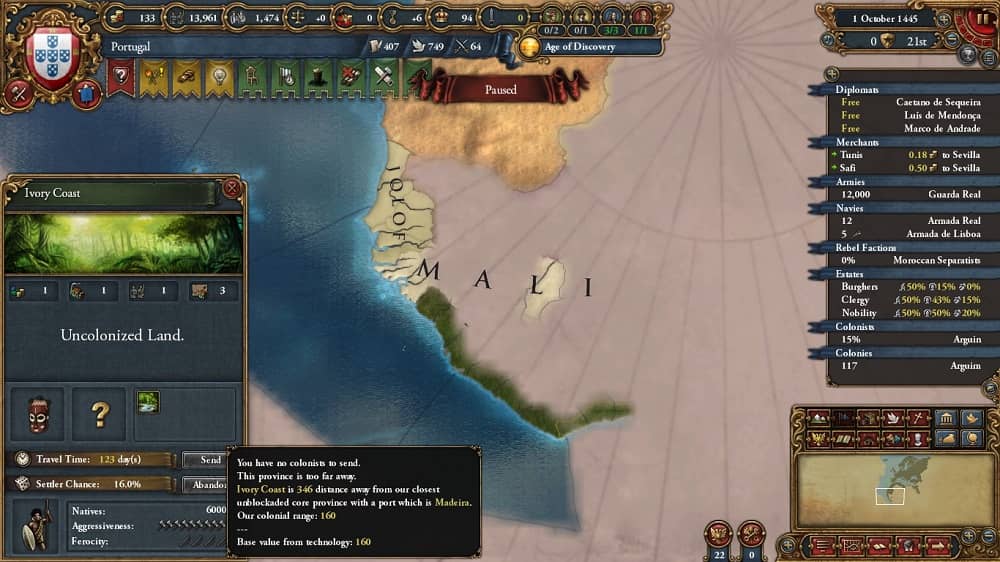 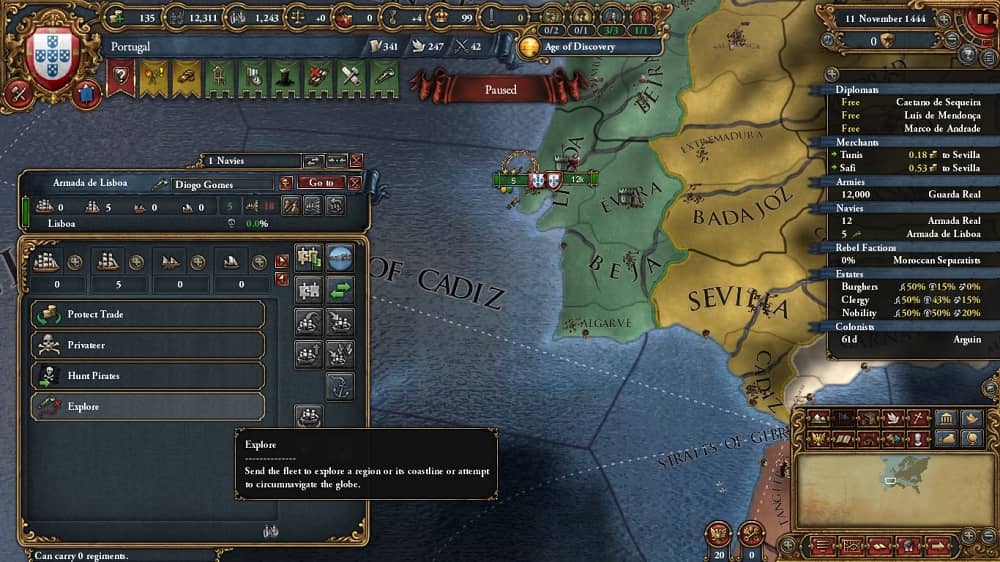 The first idea is ‘Colonial Ventures’ which provides you with your first colonist. You can now colonise any unclaimed province by selecting it and sending a colonist, providing it is within colonial range of one of your core provinces. It is only likely that you can do this as Castille or Portugal with provinces like Arguin in north-west Africa. 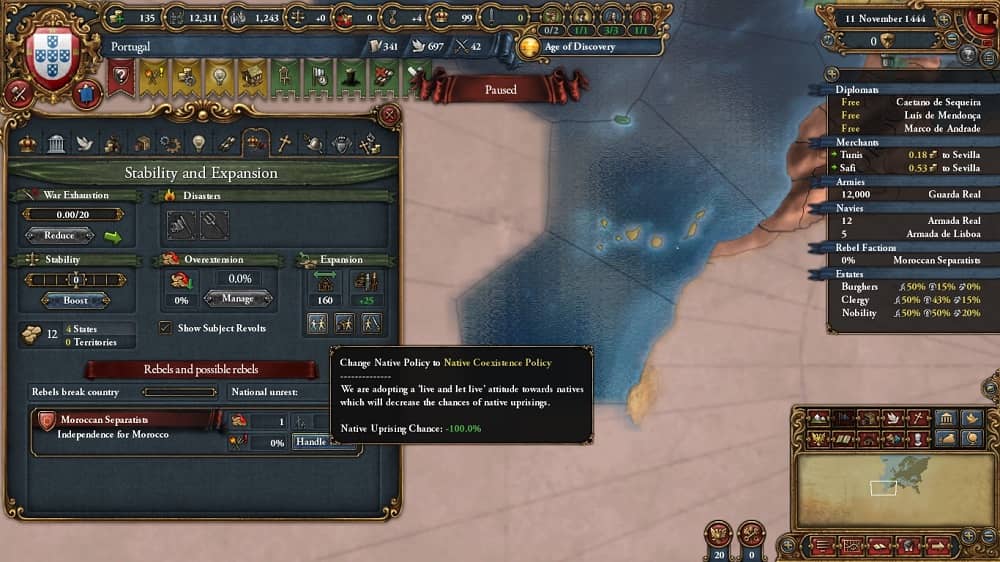 When you receive your colonist you will be asked what native policy you would like you to choose. Be careful when making your decision, as changing it later costs one stability. You can choose ‘Native Co-Existence’ which reduces the chances of native uprising chance by 100%. This means you do not need to protect your colonies from themselves. If you have the spare manpower, however, you might want to pick ‘Native Trading’, which reduces aggression by half and boosts assimilation and chances of assimilation events in which your population increases. Or if you want, you can pick ‘Native Repression’ which doesn’t lower native aggression but boosts your settler increase. 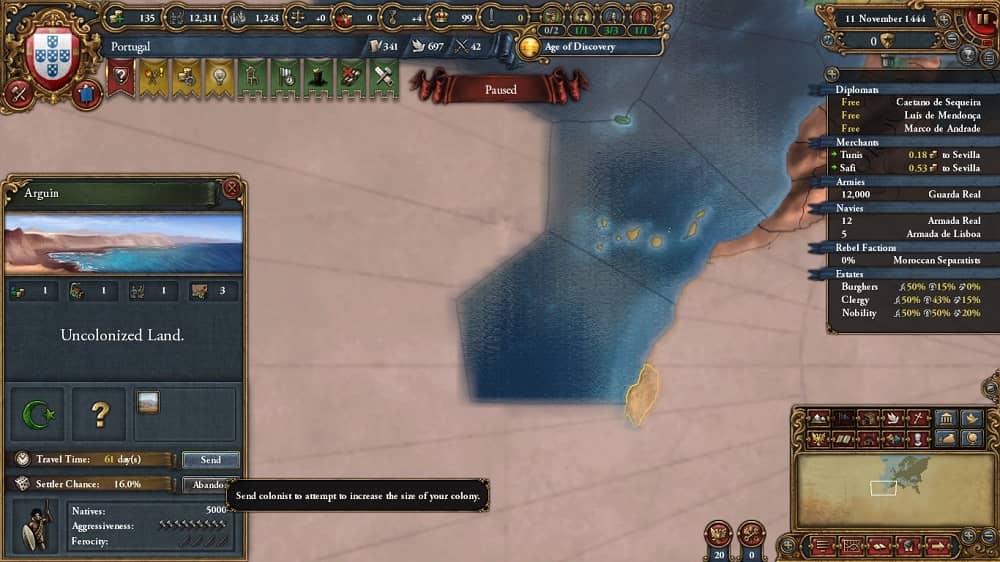 You are most likely going to need to explore the world around you by unlocking the second idea in the exploration ideas group: ‘Quest for the New World’. This allows you to recruit explorers to your navies. You should do this to a group of three light ships before sending them on mission to explore the new world.

Your colonial range is going to be the thing that will most likely stop you from colonising early — unless you are Castille or Portugal. But there are a few things you can do to increase this range. Firstly, it does increase as you reach certain diplomatic technology levels. That means f you are wanting to colonise as England or other European powers then you might want to wait until you unlock at least your second idea group slot.

If you are hasty and want to rush, there are a few options available for you. Firstly the exploration idea group’s third idea is ‘Overseas Exploration’ that increases your range by 50%. This still makes settling the new world tight for powers that are not on the Iberian Peninsula. You can also try and recruit a diplomatic advisor that increases your colonial range by 10%. However, the most surefire way to increase your range is by decreasing your distance by conquering and coring states that are closer to the provinces you want to settle.

However you get to where you want to colonise, you will want to set up a strong presence. You can quickly expand by taking expansionist ideas at the earliest opportunity — its third idea gives you 10 extra settlers per year — and the fourth idea from exploration giving you an additional 20.

You will also have access to more colonists, allowing you to settle more areas at once. You do not need these extra colonists though, as when you have set up a colony it will continue to grow with or without its colonist (though without, you lower your chance of native assimilation events occurring). This means you are free to send them out to establish a new colony. Bear in mind that each new colony will cost you two ducats per month to maintain, but if your number of developing colonies outnumbers your total number of colonists, that cost will multiply exponentially. A few extra colonies will be fine for a nation with a strong income — but more than that is financial suicide.

If you have five fully colonised provinces in certain new world locations then you will form a colonial vassal, such as The Thirteen Colonies or the West Indies. These nations will then expand on their own, but with this autonomy comes some percentage of the wealth in the new world and problems in the future when they get ideas of independence. However, getting these colonial nations early is a very powerful way to beat your neighbours in amassing power overseas. Just be wary in the future; I hear that North America has ideas of freedom.